‘We Don't Turn to Government,’ Trump Says: ‘We Put Our Faith in Almighty God’ 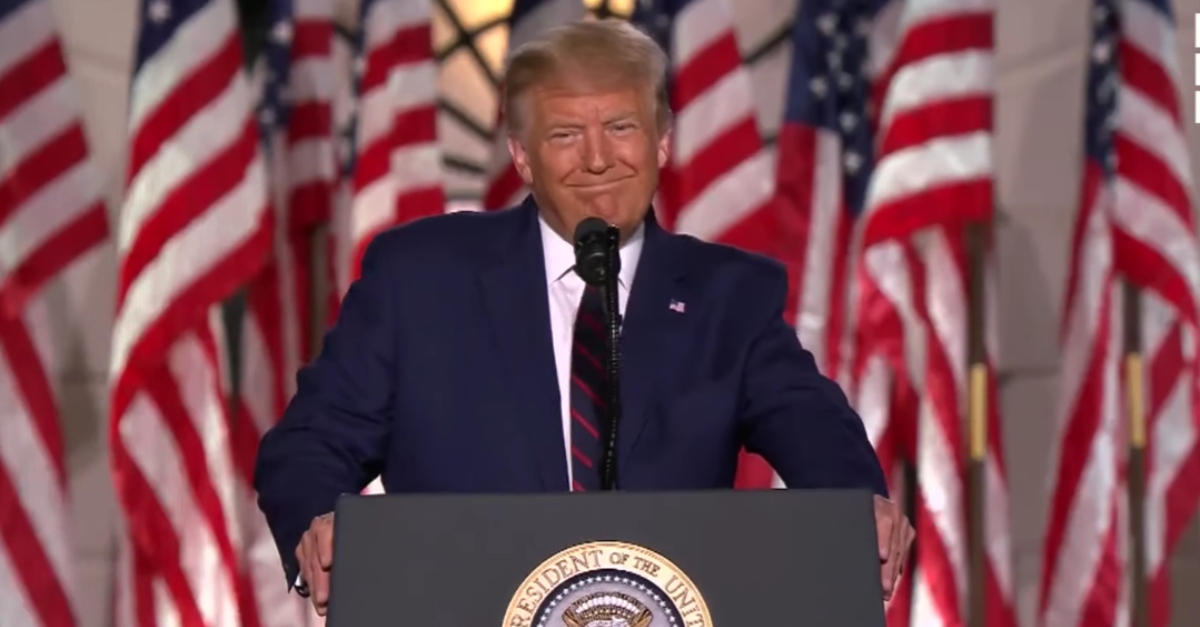 ‘We Don't Turn to Government,’ Trump Says: ‘We Put Our Faith in Almighty God’

Labeling this year’s presidential race the “most important election” in the nation’s history, President Trump accepted the Republican Party’s nomination Thursday and warned about a “socialist agenda” he said would be implemented if Democrat Joe Biden wins in November.

Trump spoke for more than an hour to a large, boisterous crowd on the White House lawn, drawing a distinction between the visions and agendas of the two parties. Democrats, he said, “do not see America as the most free, just and exceptional nation on earth.”

“Instead, they see a wicked nation that must be punished for its sins. Our opponents say that redemption for you can only come from giving power to them,” Trump said. “This is a tired anthem spoken by every repressive movement throughout history. But in this country, we don't look to career politicians for salvation. In America, we don't turn to government to restore our souls. We put our faith in almighty God.”

Biden, he said, is a “Trojan horse for socialism” who has joined forces with Bernie Sanders on multiple issues, including on immigration and public safety.

“Joe Biden claims he has empathy for the vulnerable. Yet the party he leads supports the extreme late-term abortion of defenseless babies, right up until the moment of birth. Democratic leaders talk about moral decency, but they have no problem with stopping a baby's beating heart in the ninth month of pregnancy. Democrat politicians refuse to protect innocent life, and then they lecture us about morality and saving America's soul. Tonight, we proudly declare that all children – born and unborn – have a God-given right to life.”

Referencing daytime Democratic caucus meetings last week, Trump said that “during the Democrat Convention the words ‘under God’ were removed from the Pledge of Allegiance – not once, but twice.”

“We will never do that,” Trump said.

The President was referring to two caucus meetings in which the words were removed. However, the Pledge was recited in full on all four nights of the Democratic Convention.

He also pledged to “fully restore patriotic education to our schools” and to “always protect … free speech on college campuses.”

The president also mentioned the judiciary and school choice. On the courts, Trump said that by inauguration day, “we will have approved more than 300 federal judges, including two great new Supreme Court justices” in Brett Kavanaugh and Neil Gorsuch. On school choice, Trump said in a second term he would “expand charter schools and provide school choice to every family in America.”

Trump continued his criticism of cancel culture, saying Americans “are exhausted trying to keep up with the latest list of approved words and phrases and the ever-more-restrictive political decrees.”

Trump painted Biden as a “career politician” who has been on the “wrong side of history” during his 47 years in D.C. Trump criticized Biden for supporting NAFTA, the Trans-Pacific Partnership and China's entry into the World Trade Organization.

“He repeatedly supported mass amnesty for illegal immigrants,” Trump said. “He voted for the Iraq war. He opposed the mission to take out Osama bin Laden. He opposed killing [Qassem] Soleimani. He oversaw the rise of ISIS and cheered the rise of China as a positive development for America and the world.”

Trump called Nov. 3 the “most important election in the history of our country.”

“There has never been such a difference between two parties or two individuals in ideology, philosophy or vision than there is right now,” he said. “Our opponents believe that America is a deprived nation. We want our sons and daughters to know the truth: America is the greatest and most exceptional nation in the history of the world.”