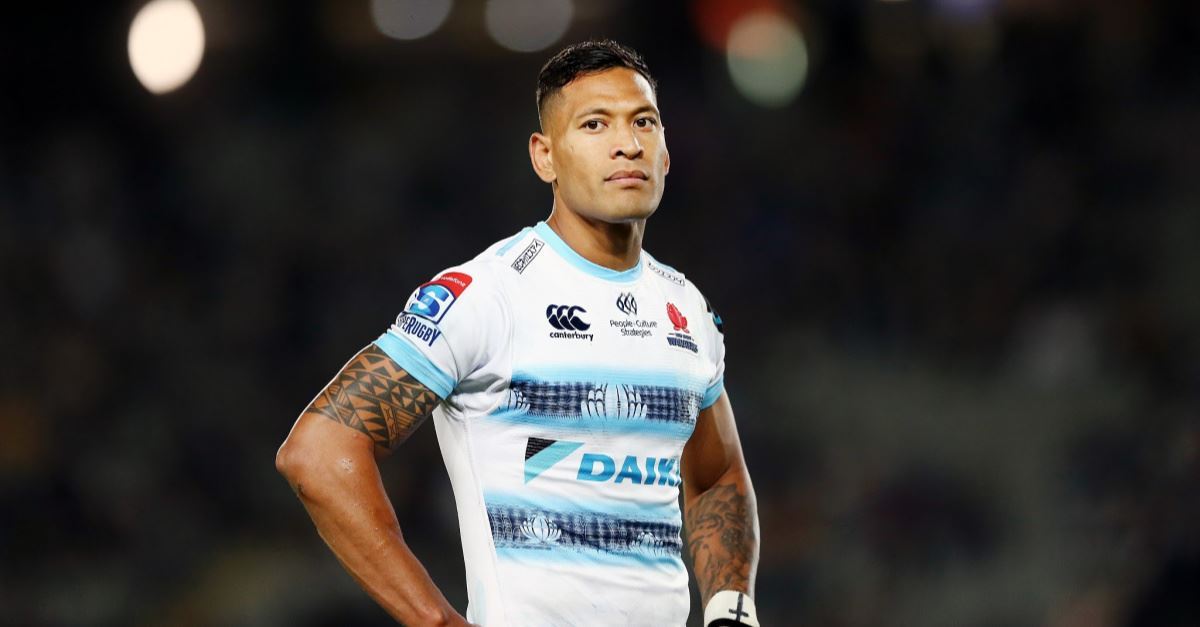 An Australian rugby star who makes more than $1 million per year is set to be fired in the coming days for posting a Bible verse about homosexuality on social media and urging his followers to “turn to Jesus.”

Rugby Australia said April 14 that Israel Folau was in breach of the players’ code of conduct and had 48 hours to accept the sanction or have the matter referred to a Code of Conduct hearing. The incident warranted “termination of his employment contract,” the statement said. The meeting could occur next week.

Speaking after church Sunday, Folau said he would not apologize for the Bible-centric social media posts on Instagram and Twitter and would be content walking away from rugby.

Folau signed a contract in 2015 that paid him nearly $1.5 million U.S. per year. He signed an undisclosed new deal last year, and made at least one list as the highest-paid rugby player in the world.

He plays for the Wallabies Australian national rugby team and the New South Wales Waratahs in the Super Rugby League.

“First and foremost, I live for God now,” Folau told The Sydney Morning Herald Sunday. “Whatever He wants me to do, I believe His plans for me are better than whatever I can think. If that's not to continue on playing, so be it.

“In saying that, obviously I love playing footy and if it goes down that path I'll definitely miss it. But my faith in Jesus Christ is what comes first.”

The controversy started April 10 when Folau -- who is known for his Christian faith -- posted an image on Instagram that referenced Scripture and read, “Warning. Drunks, Homosexuals, Adulterers, Liars, Forficators, Thieves, Atheists, Idolaters. Hell Awaits You. Repent! Only Jesus Saves.”

He wrote next to the Instagram picture, “Those that are living in Sin will end up in Hell unless you repent. Jesus Christ loves you and is giving you time to turn away from your sin and come to him.” He also quoted Galatians 5:19-21: “Now the works of the flesh are manifest, which are these , adultery, fornication, uncleanness, lasciviousness, idolatry, witchcraft, hatred, variance, emulations, wrath, strife, seditions, heresies, envyings, murders, drunkenness, revelings, and such like: of the which I tell you before, as I have also told you in time past, that they which do such things shall not inherit the kingdom of God.”

The same day, he linked on Twitter a story about Tasmania allowing those ages 16 and over to change their birth certificates or to remove gender from the certificates altogether. He wrote: “The devil has blinded so many people in this world, REPENT and turn away from your evil ways. Turn to Jesus Christ who will set you free.” That post gained 4,000 likes.

Raelene Castle, chief executive of Rugby Australia, said Folau had been warned in the past about his social media posts.

“It's obviously a decision that's in the process right now but I believe in a God that's in control of all things,” Folau said. “Whatever His will is, whether that's to continue playing or not, I'm more than happy to do what He wants me to do.”