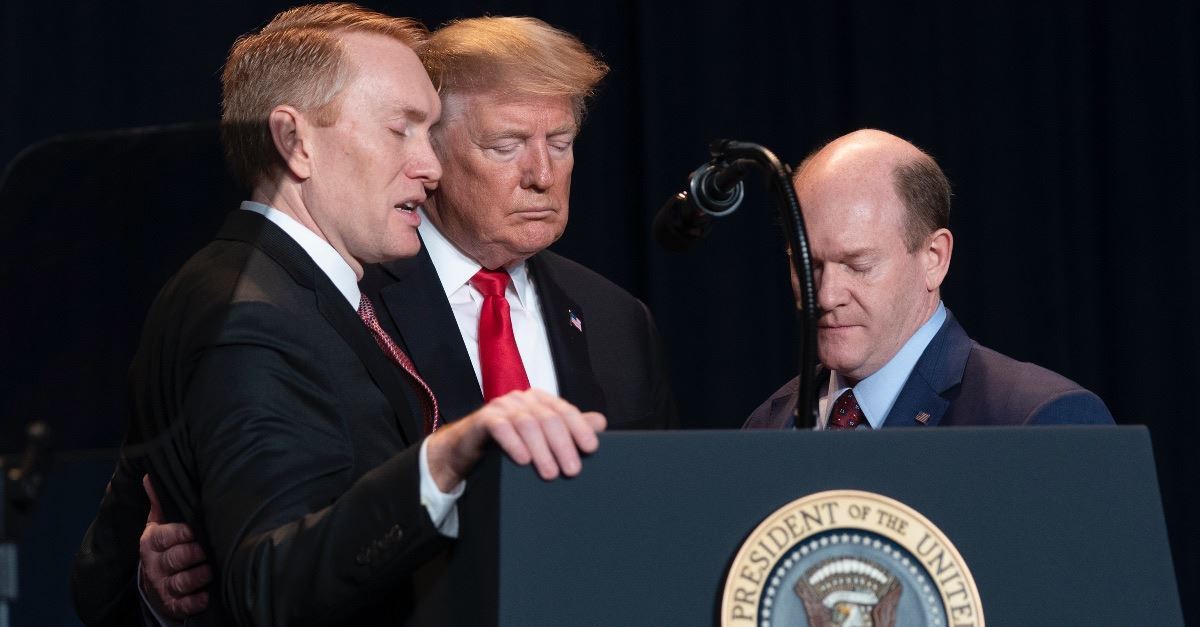 President Trump on Thursday committed to helping protect faith-based adoption agencies and then quoted the book of Jeremiah in reaffirming his position on the unborn.

Trump’s comments came at the National Prayer Breakfast, an annual event that brings together different religious groups and members from both parties. Every president since President Eisenhower has attended.

Trump discussed several issues, including anti-Semitism, human and sex trafficking, and religious liberty, but his remarks about abortion received the loudest applause.

“As part of our commitment to building a just and loving society, we must build a culture that cherishes the dignity and sanctity of innocent human life,” Trump said. “All children, born and unborn, are made in the holy image of God. Every life is sacred, and every soul is a precious gift from heaven.

“As the Lord says in Jeremiah, ‘Before I formed you in the womb, I knew you before you were born. I set you apart,’” he added, quoting from Jeremiah 1:5.

To underscore his point, Trump recounted the story of a baby named Grayson that was born in the backseat of a car during a snowstorm four months premature, weighing only one pound, 11 ounces. Doctors were unsure if he would survive. The parents, Nikki and Tyler Watkinson, were in attendance at the prayer breakfast.

Grayson is now one year old.

“He is a beautiful happy, healthy guy,” Trump said. “... Nikki said he was put on this earth to do big things. He may be here someday, right here, Nikki. He already has [done great things] and he will do more and more as he grows older.”

Trump also discussed his administration's record on religious liberty: He appointed a special envoy to monitor and combat anti-Semitism recently. Imprisoned pastor Andrew Brunson was released from Turkey. The State Department is cutting off aid to nations that do not demonstrate a commitment to ending human trafficking.

Trump also mentioned a Michigan case in which the state was sued for funding faith-based adoption agencies that don’t place children in same-sex homes. Trump didn’t mention the details of the case, but he did say his administration supports the agencies. He pointed to a couple, Melissa and Chad Buck, who adopted through such an agency.

“Unfortunately, the Michigan adoption charity that brought the Buck family together is now defending itself in court for living by the values of its Catholic faith,” Trump said. “We will always protect our country's long and proud tradition of faith-based adoption. My administration is working to ensure that faith-based adoption agencies are able to help vulnerable children find their forever families while following their deeply held beliefs.”

Faith, Trump said, has been a positive force in the nation’s history.

“Since the founding of our nation, many of our greatest strides – from gaining our independence, to abolition, [to] civil rights, to extending the vote for women – have been led by people of faith and started in prayer,” he said. “When we open our hearts to faith, we fill our hearts with love. Many of the people in this room lead and support the charities and faith-based institutions that bring hope to the lives of our citizens, comfort to those in despair and solace to those in grief, aid to those in need and a helping hand to the struggling people all around the world.”