Christian singer Mac Powell is thanking fans for their prayers and praising God for his wife’s recovery, six weeks after she was rushed to the hospital with a brain aneurysm and a hemorrhagic stroke.

Aimee Powell was taken by ambulance in late November to the hospital, where she spent 14 days before being released. Mac Powell penned an urgent prayer request on Instagram the day she was admitted.

This week, he said her health had greatly improved.

“Today marks six weeks since my wife Aimee woke up having a brain aneurysm which led to a hemorrhagic stroke,” he wrote. “She spent 14 days in the hospital. Aimee is doing great and we are so blessed that she was home for Christmas. We enjoyed the holidays with our children, family, and friends. What a great time to reflect on the miracle that God performed in Aimee!

“Headaches have been a new normal for her, but she is continuing to heal and feel better each day. We will never be able to express our thanks and gratitude for all your prayers and love. We know that Aimee is here because of God, His plan for her life, and because of the prayers of the Saints all around the world! She’s been able to slowly get back to her normal mama routines like visiting colleges, seeing plays and basketball games, and getting in some snuggle time. Aimee is so incredibly grateful to be here with all of us. We go to a follow-up doctor visit on Tuesday. We hope and expect to get a great report. Thank you again for your continued prayers. To God be the glory!” 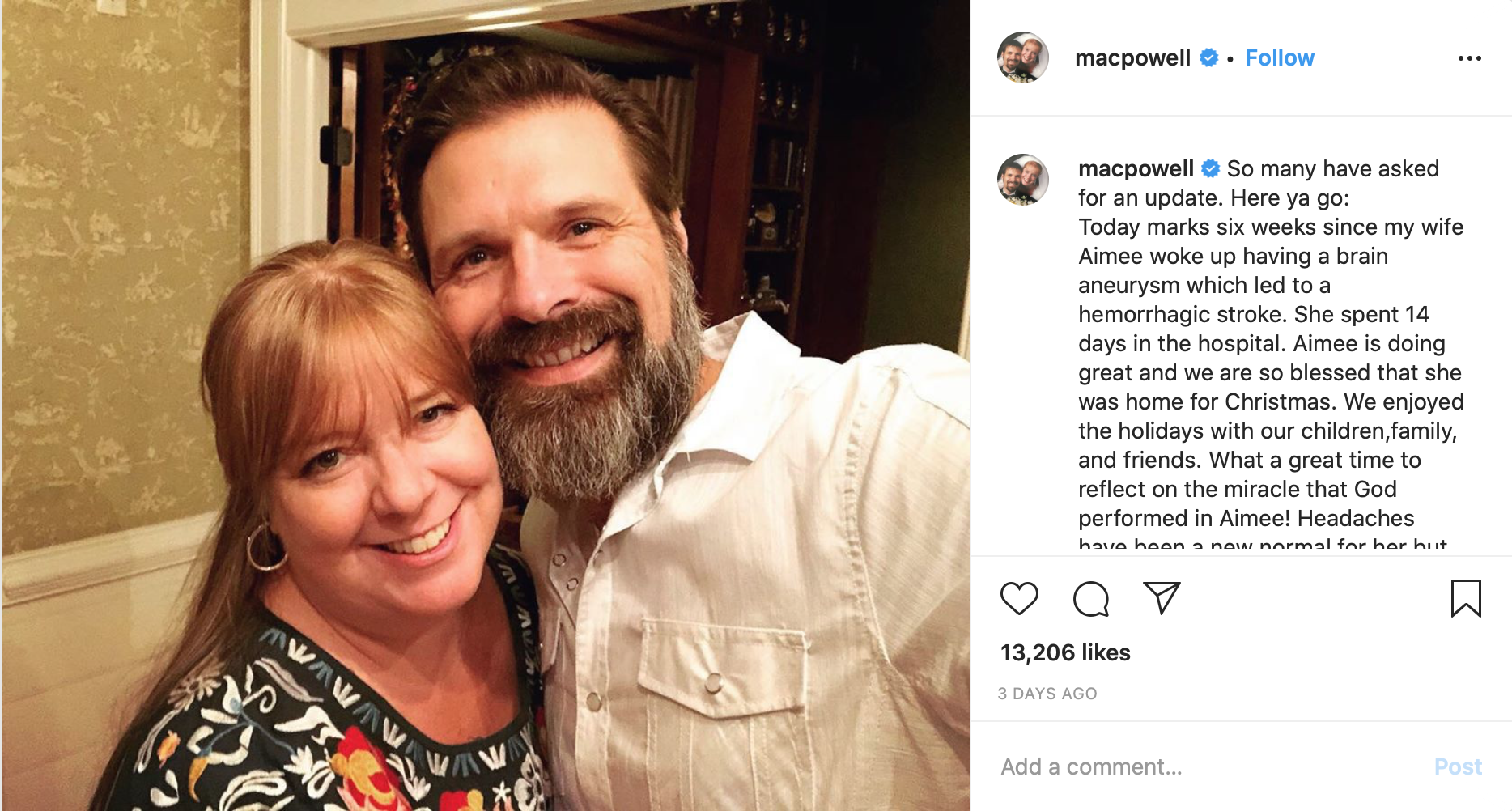 Powell and his wife have five children. He was the frontman for Third Day for more than 25 years before the group’s 2018 farewell tour. He now has a new band, Mac Powell and the Family Reunion.

Aimee Powell posted her own update in December after she was released.

“Having a double brain aneurysm and a stroke at 45 is scary,” she wrote. “Besides the trauma of what has happened to my brain and body, there of course has been a bit of physiological trauma too. I’ve had moments of being overwhelmed and sad. But Jesus’ love overcomes all that. He continues day after day to be my healer and comforter. My doctor has been amazed at my progress. He says I still have a long way to go, but he is still encouraged.”