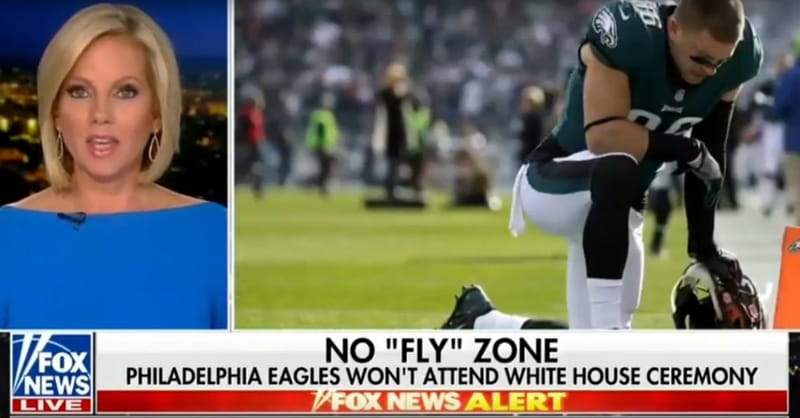 The controversy began when a segment aired Monday night that discussed President Trump’s cancellation of the visit by the Super Bowl champion Philadelphia Eagles. As host Shannon Bream mentioned the national anthem protests, the screen showed images of Eagles players kneeling in prayer.

Philadelphia player Zach Ertz, a tight end, took to Twitter to criticize the network, referencing a Fox News Tweet showing the segment. One of the photos showed him.

“This can’t be serious.... Praying before games with my teammates, well before the anthem, is being used for your propaganda?! Just sad, I feel like you guys should have to be better than this...,” he wrote.

One Eagle fan on Twitter, Pete (@Goombata), wrote, “The images you’re seeing, they’re of the players PRAYING to our Lord and savior Jesus Christ. We are quite possibly the most Christian team in the league. Oh and our quarterback just opened a FREE food truck called Thy Kingdom Crumb to, ya know, feed the hungry.”

Others on Twitter noted that none of the Eagles players during the 2017 season kneeled in protest of the national anthem.

Eventually, Fox News deleted the tweet of the segment and apologized.

“During our report about President Trump canceling the Philadelphia Eagles trip to the White House to celebrate their Super Bowl win, we showed unrelated footage of players kneeling in prayer,” said Fox News’ Christopher Wallace, executive producer of the show. “To clarify, no members of the team knelt in protest during the national anthem throughout the regular or post-season last year. We apologize for the error.”