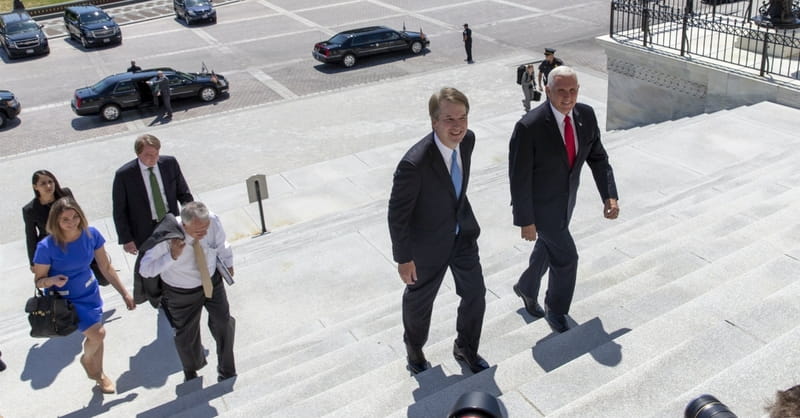 Christian leaders and groups were mostly positive in their reaction to President Trump’s nomination of Brett Kavanaugh to the IU.S. Supreme Court, although it wasn’t unanimous.

About 40 evangelical leaders co-signed a document applauding the selection and urging the Senate to “work diligently to confirm his appointment without obstruction.”

“Supreme Court nominations are a crucial aspect of any president’s legacy,” the letter read. “With Judge Kavanaugh, President Trump has an opportunity to shape the direction of the Supreme Court for a generation or more. As evangelical leaders, we support President Trump’s nominee and will pray and work for a quick confirmation process.”

Among the signatories was Russell Moore, president of the Ethics & Religious Liberty Commission of the Southern Baptist Convention; Joel Belz, founder of World Magazine; J.D. Greear, senior pastor of The Summit Church and president of the Southern Baptist Convention; Dennis Rainey and Bob Lepine of FamilyLife Today; and George O. Wood, chairman of World Assemblies of God Fellowship.

“We believe that Scripture teaches that government is justly ordered when it exercises the proper authority delegated to it by God,” the statement further read. “This means ensuring the rule of law, administering justice fairly and impartially, protecting the God-given dignity of every human being, and safeguarding our constitutional liberties.

“As custodians of our first freedoms,” it continued, “Supreme Court justices play a unique role in shaping the trajectory of legal precedent and public morality in our country. Because of the great importance the Supreme Court plays in interpreting the Constitution, it is necessary that nominees be impartial and faithful to the Constitution as it is, not as he or she simply wishes it to be.”

“We believe that the judicial philosophy of Judge Brett Kavanaugh fulfills the important criteria listed above and merits appointment as the next associate justice on the United States Supreme Court,” the statement read.

“President Trump promised a constitutionalist – someone who will call balls and strikes according to the Constitution,” Perkins said. “We trust the president that Judge Kavanaugh will fit this mold as a justice. Judge Kavanaugh has a long and praiseworthy history of judging as an originalist, and we look forward to having a justice with his philosophical approach on the Court.

“From the day Justice Kennedy retired, the Left has sought to make this vacancy all about abortion – even though many other significant issues are at stake including religious freedom and free speech. Under the Obama administration, we saw a growing assault on religious freedom and the courts became a battleground for secularists seeking to remove faith from the public square. Judge Kavanaugh resisted this trend in at least two instances -- an HHS contraceptive mandate case and in an opinion supporting inauguration prayers.

“We are committed to working with President Trump and senators to help move the grassroots to gain the confirmation of Judge Kavanaugh,” Perkins’ statement concluded.

But one group, the American Family Association, released a statement opposing Kavanaugh.

“Judge Kavanaugh’s reasoning on religious liberty, Obamacare and issues concerning life have proven to be of major concern,” said AFA President Tim Wildmon. “For these and other reasons, we are calling on citizens to urge their senators to firmly oppose the nomination of Brett Kavanaugh as a Justice on the United States Supreme Court.”

Michael Foust is a freelance writer. Follow his blog, MichaelFoust.com.