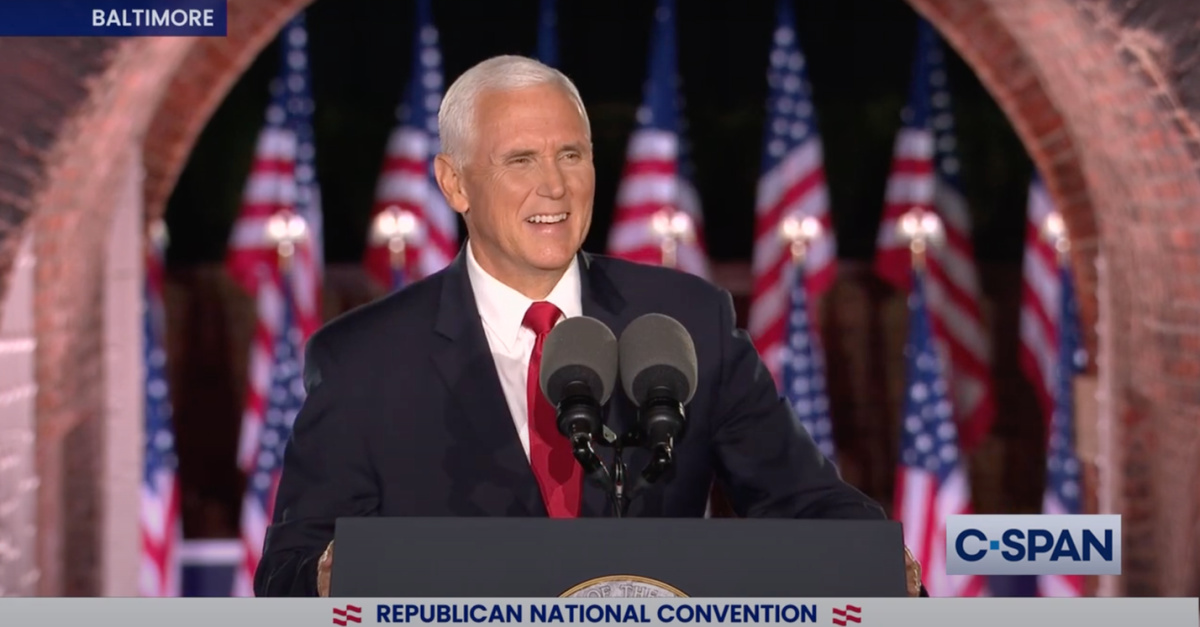 Vice President Mike Pence touted the administration’s achievements Wednesday and painted a gloomy picture of an America led by Joe Biden, saying the Democratic nominee would lead the country toward socialism and be a “Trojan horse for the radical left.”

Speaking in front of an audience at Fort McHenry on the third night of the Republican National Convention, Pence addressed several hot-button issues, including abortion, school choice and immigration.

He also quoted former Democratic presidential candidate Bernie Sanders, who said Biden could be the “most progressive president” since Franklin Delano Roosevelt and that ideas once “perceived to be radical and extreme” are now “mainstream” within the Democratic Party.

“In this election it's not so much whether America will be more conservative or more liberal, more Republican or more Democrat. The choice in this election is whether America remains America,” Pence said. “It's whether we will leave to our children and our grandchildren a country grounded in our highest ideals of freedom, free markets and the unalienable right to life and liberty, or whether we will leave them a country that's fundamentally transformed into something else.”

Trump “appointed more than 200 conservative judges” to federal courts and “supported the right to life,” Pence said. Trump and Biden, he said, have dramatically different positions on the economy, energy, China, immigration and social issues.

“Where President Trump cut taxes, Joe Biden wants to raise taxes by nearly $4 trillion. Where this president achieved energy independence for the United States, Joe Biden would abolish fossil fuels, end fracking and impose a regime of climate change regulations that would drastically increase the cost of living for working families,” Pence said. “Where we fought for free and fair trade and this president stood up to China and ended the era of economic surrender, Joe Biden has been a cheerleader for communist China. He wants to repeal all the tariffs that are leveling the playing field for American workers, and he actually criticized President Trump for suspending all travel to China at the outset of this pandemic.

“Joe Biden is for open borders, sanctuary cities, free lawyers and healthcare for illegal immigration,” Pence said. “President Trump, he secured our border and built nearly 300 miles of that border wall. Joe Biden wants to end school choice. President Trump believes that every parent should have the right to choose where their children go to school, regardless of their income or area code. President Trump has stood without apology for the sanctity of human life every day of this administration. Joe Biden, he supports taxpayer funding of abortion right up to the moment of birth. When you consider their agenda, it’s clear: Joe Biden would be nothing more than a Trojan horse for the radical left.”

America, Pence said, is “at a crossroads.”

“President Trump has set our nation on a path of freedom and opportunity. Joe Biden would set America on a path of socialism and decline, but we're not going to let it happen,” Pence said. “President Donald Trump believes in America and in the goodness of the American people, the boundless potential of every American to live out their dreams and freedom. Every day, President Trump has been fighting to protect the promise of America. Every day our president has been fighting to expand the reach of the American dream. Every day, President Donald Trump has been fighting for you, and now it's our turn to fight for him.”