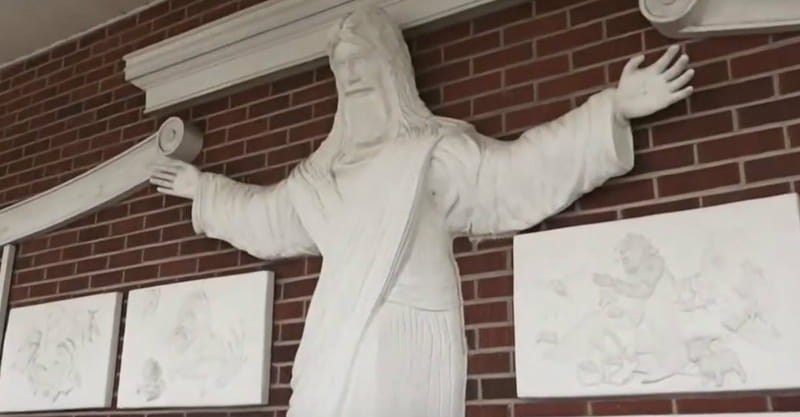 A Baptist church’s decision to remove a statue of Jesus it deems “too Catholic” has divided Christians on social media.

The 7-foot-tall statue has stood at Red Bank Baptist Church in South Carolina since 2007, The State newspaper reported.

"We have discovered that there are people that view the art as Catholic in nature. We understand that this is not a Catholic icon, however, people perceive it in these terms," read a letter to the artist from church pastor Jeff Wright and Mike Dennis, the church's chairman of deacons.

Bert Baker Jr. is the artist who carved the statue. He is a former member of the church.

"I'm not interested in stirring the pot, but people not liking it because it looked too Catholic is crazy, man. It's been up there for 11 years," Baker told The State. "I don't agree with the letter, it bothers me."

On Facebook, Christians were split on the church’s move.

“Heaven won't be divided by Lutherans, Methodists, Baptist or Catholics,” Jill Rogers wrote on The State’s Facebook issue. “It seems they are pulling out from Christianity all together. Did someone make them worship this statue. I think not. Seems they need to be worrying about souls as statues. It's a sad day for Christianity.”

Another person, Deborah Lynn, wrote, “Why do y'all hate Catholics so much? Do I look too Catholic because I have red hair? If I wanted to go to your church would I be removed because of my Catholic looking red hair? Stop pretending the Baptist church isn't anti-Catholic.”

But some said the issue is a church issue and shouldn’t be in the news.

“Since the Current membership voted to remove the statue this is not much of a news issue,” Benjamin Cliatt wrote. “I see it as a media attempt to create news as opposed to reporting it. Stir the pot to create an issue from a church membership decision.”

Wrote Douglas Baer, “Must have been a slow news day.”