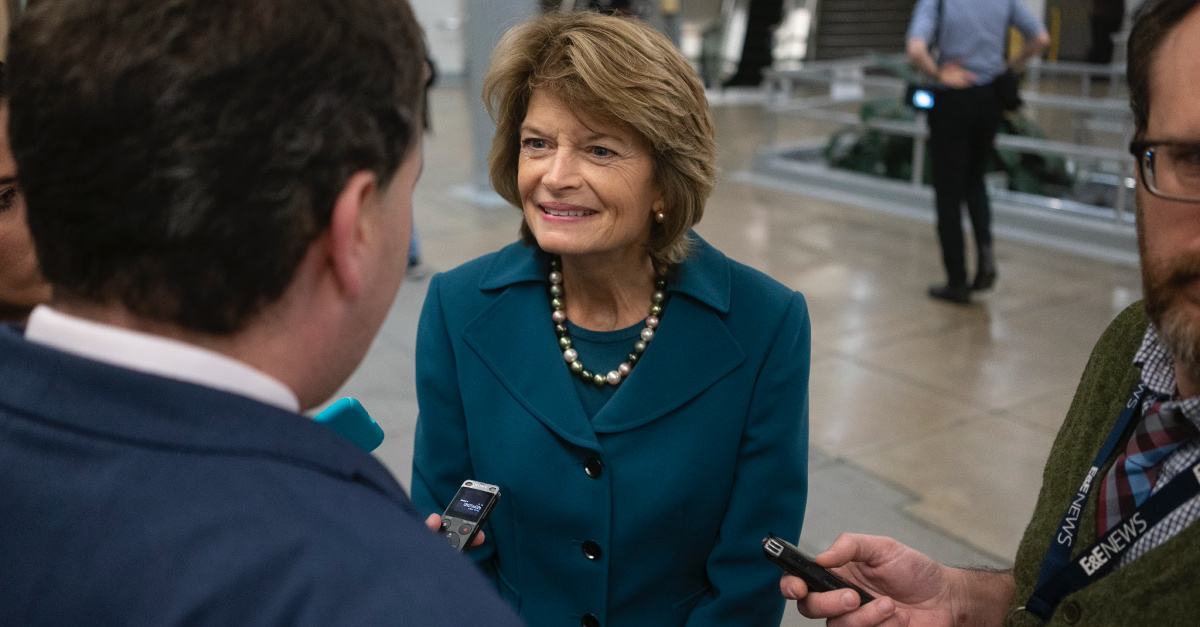 Sen. Lisa Murkowski, R-Alaska, long considered a vital swing vote in the impeachment trial of President Donald Trump, said Monday a decision to remove him from office belongs in the hands of voters.

“I cannot vote to convict.  The Constitution provides for impeachment, but does not demand it in all instances,” Murkowski said during a speech on the Senate floor adding, "The voters will pronounce a verdict in nine months, and we must trust their judgment."

The senator’s comments came the same day as closing arguments in President Trump’s impeachment trial. Trump is facing two House-initiated articles of impeachment: abuse of power and obstruction of Congress. The full Senate is set to vote Wednesday, where an acquittal is expected. The only mystery remaining is whether members of each party will break ranks during the vote.

During her 10-minute speech, Murkowski took Congress to task for their handling of the impeachment process.

“The House rushed through what should have been one of the most serious, consequential undertakings of the legislative branch simply to meet an artificial, self-imposed deadline,” she said while also describing the Senate debate as "wallowing in partisan mud."

“The Senate should be ashamed by the rank partisanship that has been on display here," she said.

During the preceding closing arguments, the partisan divide that marked the impeachment from its early stages had not waned.

Adam Schiff, the House Intelligence Committee Chairman who has led the prosecution of Trump, beseeched senators not to wait until the November election.

“You can’t trust this president to do the right thing, not for one minute, not for one election, not for the sake of our country," the California Democrat said. "You just can't. He will not change and you know it.

"What are the odds if left in office that he will continue trying to cheat? I will tell you: 100 percent. A man without character or ethical compass will never find his way."

Schiff also warned Republicans who vote to acquit that they were tying their own legacy to the president.

“History will not be kind to Donald Trump,” Schiff said. “I think we all know that. And if you find that the House has proved its case and still vote to acquit, your name will be tied to his with a cord of steel for all of history.”

But Jay Sekulow, who is part of Trump’s defense team, countered that the House articles of impeachment were nothing but a partisan pursuit designed to reverse a 2016 election result they found revolting.

“This is exactly and precisely what the founders feared,” Sekulow said. “This was the first totally partisan presidential impeachment in our nation’s history and it should be our last.

“What the House Democrats have done to this nation, the Constitution, the office of the president, the president himself and to this body is outrageous. They have cheapened the awesome power of impeachment and unfortunately, of course, the country is not better for that.”

Following the closing arguments, the 100 members of the Senate were each given 10 minutes to explain their votes, a process that is ongoing today.

During his time on the Senate floor, Joe Manchin, D-W.V., another potential swing vote, acknowledged he was uncertain how he would vote on the articles of impeachment and offered up a censure vote as a compromise that would allow the Senate to officially express their disapproval of Trump’s actions without removing him from office.

“I see no path to the 67 posts required to impeach President Trump and I haven't since this trial started,” Manchin said. "However, I do believe a bipartisan majority of this body would vote to censure President Trump for his actions.”