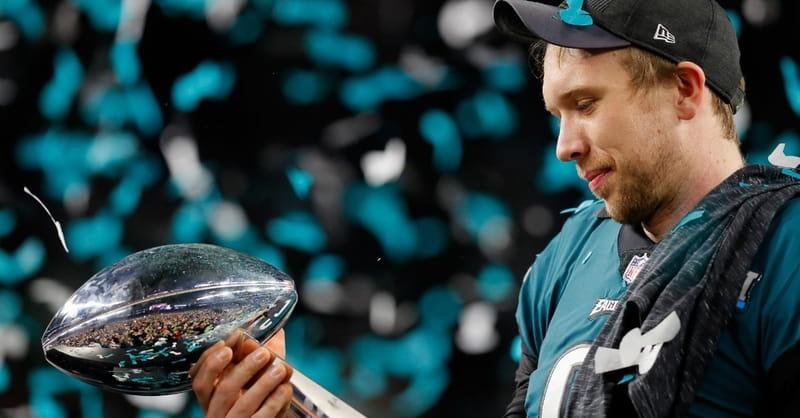 Last month, the Philadelphia Eagles defeated the New England Patriots in the 2018 Super Bowl, bringing the football season to an impressive end for Eagles quarterback and Super Bowl MVP Nick Foles. Now, in the aftermath of the game, the team is considering trade offers for their prize quarterback. Tyler Conway reports at bleacherreport.com that there’s currently at least one offer high enough to tempt the victorious team to trade Foles.

Foles nearly decided to end his football career in 2016. However, guided by faith, family, and prayer, he ultimately chose to stick with the NFL. This decision led him to this year’s Super Bowl victory and opened up doors for some personal and NFL-wide records. According to Conway, Foles became the “first player in NFL history” to both catch and throw a Super Bowl touchdown.

Although, as Conway notes, Foles’ career has been “a mixed bag of NFL success,” this 2018 Super Bowl victory made him particularly desirable to teams in the market for new quarterbacks. “One Super Bowl run can change perceptions fast,” says Conway. And now is the perfect time for the Eagles to make a trade, especially since they’re expecting their other quarterback, Carson Wentz, to be fully recovered from last season’s injury by week one of the upcoming season.

As Conway summarizes, “The Eagles … should look to move [Foles] this offseason while his value is at its highest.”