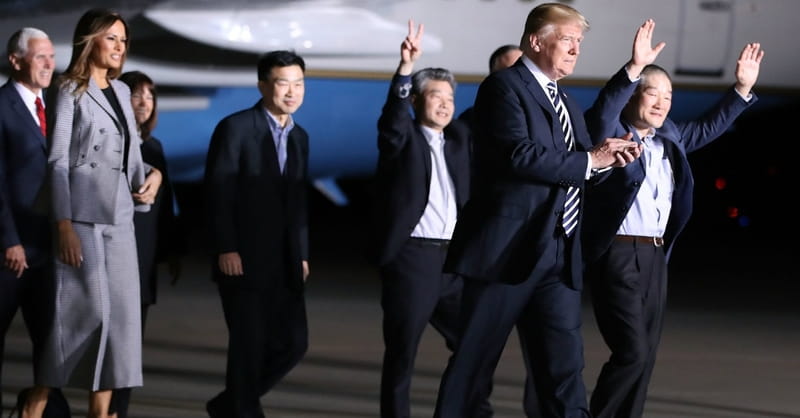 On Wednesday, Secretary of State Mike Pompeo brought home three American citizens who had spent the last one to three years as prisoners in North Korea. All three men are Christians and ethnically Korean. Two were falsely accused of “hostile acts” and arrested in the spring of 2017. The third, according to USA Today, was imprisoned for supposedly spying on North Korea and “trying to steal military secrets for South Koreans.”

In a statement released on their return journey, the three men released yesterday thanked “God, and all our families and friends who prayed for us and for our return,” USA Today reports. Additionally, the family of one of the men wrote on Twitter, “We … want to thank the President for engaging directly with N. Korea. Mostly, we thank God for Tony’s safe return.”

Trump hinted at the possible release of these three men last week. North Korea’s release of the American citizens was done out of preparation for the anticipated meeting between Trump and Kim Jong-un later this year. According to The New York Times, “[T]he prisoner release was an American condition to the planned [nuclear] talks.”

Photo: U.S. President Donald Trump walks with the three Americans just released from North Korea, Kim Dong Chul, Kim Hak-song and Tony Kim at Joint Base Andrews on May 9, 2018 in Maryland. Secretary of State Mike Pompeo traveled to North Korea and returned with the three men who have been detained in North Korea.