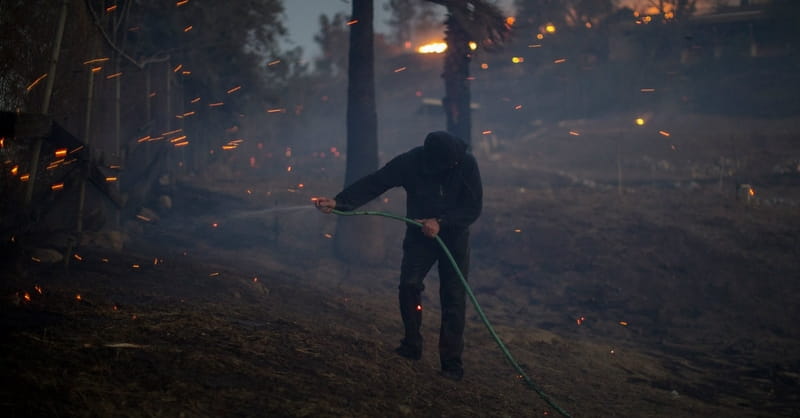 This week, thousands of southern California residents have been evacuated from their homes due to wildfires. As strong winds push these wildfires through Ventura County, burning 50,000 acres, more than 1,000 firefighters have taken their stand against the blaze. But the firefighters aren’t the only ones fighting.

According to CNN, “for a few hours late Monday night, [the firefighters] had help from a band of friends armed only with garden hoses.” One of these five friends was Brylle San Juan, a young man living in Camarillo. He could see the blaze from his home and decided to drive the 14 miles north to Ventura with his friends to see how they could help.

San Juan grew up in Ventura, the article says, and “didn’t want to sit idly as it burned.”

Upon arriving in an already burning neighborhood, San Juan and his friends grabbed garden hoses and buckets and started dousing houses. Neighbors soon joined them. Meanwhile, firefighters fought hard to save burning structures. After three hours of hard work, the five friends had helped to save a few of the houses in the neighborhood. At the expense of their own safety, they had helped victims protect their homes.

In his interview with CNN, San Juan acknowledged, “It was kind of stupid of us to do so, but everyone wanted to help.”

As a student of Ventura College, San Juan currently has a bit of a holiday from classes. They’ve all been cancelled due to the wildfires. But, as the article says, he plans to use his time off helping protect nearby neighborhoods from the fire. “He’s prepared to jump back into the fray—garden hose in hand—to help if needed.”

Photo: A strong wind blows embers around a resident hosing his burning property during the Creek Fire on December 5, 2017 in Sunland, California. Strong Santa Ana winds are rapidly pushing multiple wildfires across the region, expanding across tens of thousands of acres and destroying hundreds of homes and structures.