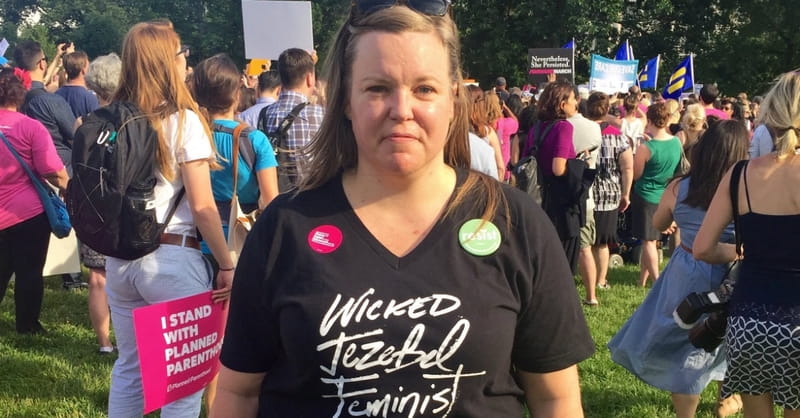 On Wednesday, hundreds of people circled the U.S. Capitol in a protest against a health care reform bill advancing in the Senate, specifically objecting to a provision halting taxpayer funding of Planned Parenthood for one year.

With a sea of angry faces and smattering of rainbow flags, the march resembled the weekend protests Washington has grown accustomed to—with an edge. A small group of Christian believers who showed up to pray were shocked at the sight of several women wearing shirts proclaiming “Wicked Jezebel Feminist.”

"We saw a lot of rage at the protest, people obviously there to defend an industry that takes millions of babies' lives," says Robbi Harvell, who serves on ministry staff at the Justice House of Prayer DC. "The shirts were strange to us—I mean, Jezebel is known in the Bible for murdering innocent people so it kind of reveals something to celebrate her."

This apparel line has strange origins. In January 2016, Planned Parenthood premiered a virtual reality film entitled Across the Line. Scenes in the VR film portray pro-life advocates yelling obscene phrases at a woman entering one of their clinics, with “Wicked Jezebel feminist!” being one of the tamer expressions.

The nation’s leading abortion provider has since copyrighted the phrase and emblazoned it on t-shirts and other products. Rather than being offended at the ironic campaign to smear their motives, young women who serve on the front lines of the pro-life movement are focused on serving those in need.

"I've been active in the pro-life movement my whole life, particularly the last few years through serving at a crisis pregnancy center, pro-life prayer ministry, and adoption advocacy," says Harvell. "Our heart is to love people, never to shout at them. We stay busy counseling women in crisis, re-stocking diapers, and a hundred other ways we volunteer to save lives—women and children."

Meanwhile, the Senate shelved plans this week to vote on the health care reform bill—though the inclusion of Planned Parenthood defunding may have been only a limited factor at play.

Many note the GOP has done a poor job explaining their health care proposals to voters. One National Journal writer calls the current health care reform effort “a case study of what hap­pens when you draw the vot­ing pub­lic en­tirely out of the pic­ture, ig­nor­ing the role that per­sua­sion plays in get­ting things ac­com­plished.”

A Senate vote is expected to be scheduled following the July 4 holiday. However, Republican Senators Susan Collins (R-ME) and Lisa Murkowski (R-AK) have issued threats against the legislation unless the provision regarding abortion providers is removed from the bill.

On the other side of Capitol Hill, thirty House members in the Republican Study Committee recently sent a letter to Senate Majority Leader Mitch McConnell (R-KY) insisting that the House pro-life provisions be retained in the Senate version.

Congressman Trent Franks (R-AZ) summarized the letter in a recent interview, saying, “We’ve warned the Senate that there’s nothing they could do that would blow the health care bill to Mars more than taking the pro-life components out of it."

Franks concluded: “I think they know if they do, they might as well not vote. It would blow it to smithereens over here.”

Josh Shepherd has served on staff at The Heritage Foundation, Focus on the Family, Bound4LIFE International, and two Congressional offices. His articles have appeared in media outlets including The Federalist, The Daily Signal, Boundless, Charisma Magazine and Christian Headlines, where he serves as a contributor. He earned a degree in Business Marketing from the University of Colorado. Josh and his wife live in the Washington, D.C. area. Follow Josh on Twitter @joshMshep.