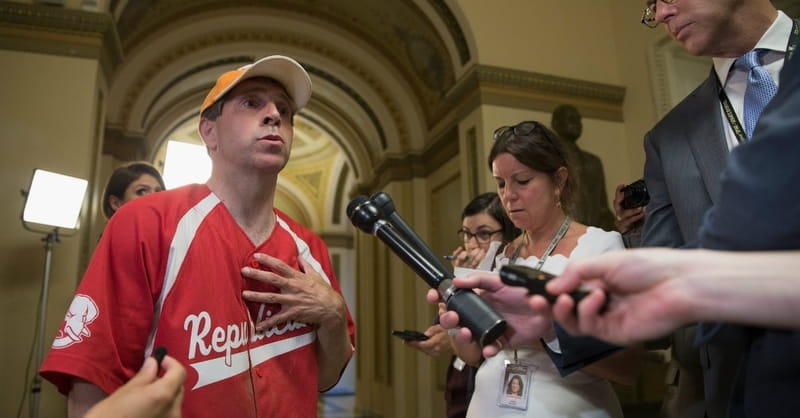 The gunman was shot by one of the Capitol Police officers and is now deceased according to a press conference with President Trump. Scalise is in stable condition, according to a press release from his office. More than two dozen Members of Congress were present at the practice, per reporting from The Hill.

They were at an early-morning baseball practice for the Congressional Baseball Game for Charity, an annual event where Republicans and Democrats raise money for charitable causes through a competitive matchup at Nationals Park. The Republican team has been practicing daily in recent weeks. Scheduled for Thursday, the charity game will go on as planned according to Speaker Paul Ryan (R-WI).

According to Congressman Ron DeSantis (R-FL) in an interview with Fox News, he and Congressman Jeff Duncan (R-SC) encountered the alleged shooter minutes before the incident. “There was a guy that walked up to us that was asking whether it was Republicans or Democrats out there,” said DeSantis. “It was a little odd; then he walked to the area where all this happened.”

“It was at least 10 minutes—it felt like a lot longer, let me tell you,” said Senator Jeff Flake (R-AZ) in a CBS interview. Scalise was on second base when the shooting began, according to eyewitness reports.

“He laid out there for 10 minutes, alone on the field… I was the first out to Steve, and then Brad [Wenstrup], another member from Ohio who’s a physician, came out and we applied pressure on the wound.” Currently a reserve officer with the U.S. Army, Congressman Wenstrup (R-OH) served as a combat surgeon in Iraq for two years.

Scalise serves as House Majority Whip, a position in Congressional leadership that entails Capitol Police officers serving as security detail. “If we hadn’t had that security detail, we would have been at the mercy of this shooter—and he had a lot of ammo,” said Congressman Mo Brooks (R-TX) in a CNN interview.

Flake continued: “Two of the security detail were shot—[a woman] and an African American gentleman shot in the leg. I believe he’s the one that brought the shooter down. He ran around for quite a while with a leg wound, returning fire.”

Congressman Joe Barton (R-TX) serves as manager for the Republican House and Senate baseball team. “Joe Barton’s boy was here, just 10 years old—we got him into the dugout and stuffed him under the bench.” Eyewitness accounts indicate several people ran for cover in surrounding apartments.

The name of the staff member for Congressman Williams was released in a series of tweets. “I now can confirm that Zack Barth, who is a legislative correspondent in my office, was shot this morning at baseball practice,” tweeted the Congressman. “He is receiving medical attention but is doing well and is expected to make a full recovery.”

Practicing at a location a few miles away, according to a tweet from Congressman Ruben Kihuen (D-NV), the Democratic baseball team immediately stopped to pray together when they heard the news of the shooting of their Republican colleagues.

This is a developing story. Updates are expected throughout the day via SRN News.

Photo: Representative Charles Fleischmann (R-TN) speaks to the media after being dropped off at Capital Hill after the Congressional Baseball Practice on June 14, 2017 in Washington, DC. Fleischmann was on the field and heard the first pop of gunfire. Multiple injuries were reported from the instance, the site where a congressional baseball team was holding an early morning practice, including House Republican Whip Steve Scalise (R-LA) who was reportedly shot in the hip