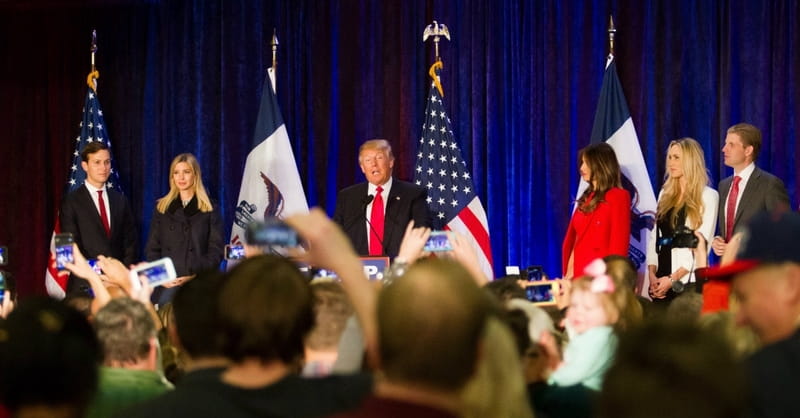 A recent report from Public Citizen, a liberal/progressive watchdog group, uncovered 64 instances of Foreign Governments, Federal Government Departments, Republican Candidates, and others using properties belonging to the Trump Organization. Among the names listed were the Republican National Committee, U.S. Chamber of Commerce Committee of 100, the Malaysian Government, and the Saudi Arabian Embassy. Proponents of the report argue that this indubitably shows a conflict of interest for President Trump.

However, tying President Trump to these actions is difficult considering that Trump relinquished control of his organization to his sons Trump Jr. and Eric via placing the organization into trust fund. What this shows is that, not only does Trump have zero power over his organization, but there is no way of knowing whether Trump had any sway in or cognizance of these business dealings. To prove a conflict of interest, one must prove awareness of those interests in question. Without providing evidence of cognizance, it is difficult to determine what Trump’s level of familiarity with these dealings was or whether they held any weight in his political decisions.

That being said, if these dealings genuinely demonstrated collusion between Donald Trump and the foreign and domestic governments and political organizations in question, then this raises serious questions of corruption in our own government. After all, the Chamber of Commerce used Trump facilities. If this was used to appease Trump so that he would deal propitiously with their department, then all 100 executives of the Chamber of Commerce’s Committee of 100 should be ousted on charges of attempted bribery.

At the time, the Chamber’s spokesperson, Blair Latoff Holmes, gainsaid the conflict of interest charges, stating that the government department “rents space from all types of hotels and event spaces across the country for our various events.” In other words, it was just business as usual. Perhaps many of the other organizations and governing bodies on the list were conducting business as usual, though, given the level of corruption present in the Malaysian and Saudi Arabian governments, business as usual at the Trump hotels probably was an attempt at bribery or flattery. Regardless, more material evidence would need to surface to substantiate the claim that Trump was being complicit in bribery based on foreign governments staying in his son’s hotels.

If President Trump is indeed actively involved in these actions then it is a cause for deep concern. However, if the president had no knowledge of the business dealings (which is a strong possibility considering his sons are in charge and he is busy with briefings, meetings, and the other duties of the office) then a conflict of interest allegation would be plenarily baseless.