President Trump Speaks at National Prayer Breakfast: 'This World Is in Trouble' 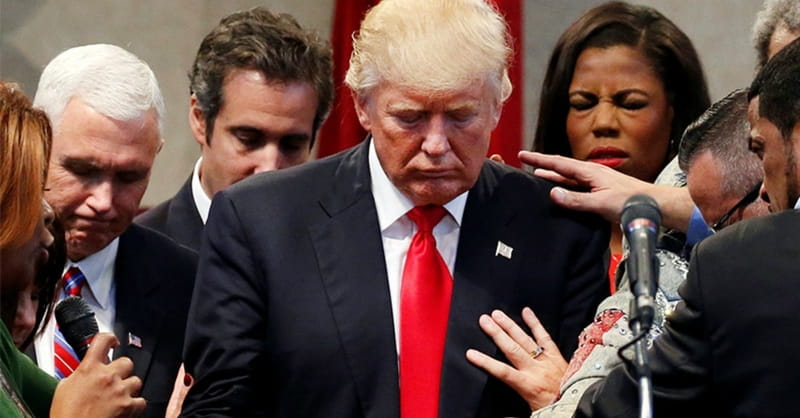 President Trump Speaks at National Prayer Breakfast: 'This World Is in Trouble'

Every year the National Prayer Breakfast seeks to unite politicians and members of the religious and business communities for one cause: to come together for fellowship and prayer.

It’s a tradition that first began in 1953, dating back to over half a century ago, during Dwight Eisenhower’s Presidency. According to the Fellowship Foundation, “The National Prayer Breakfast was started when the Members of Congress invited President Eisenhower to join them for a fellowship breakfast ‘in the spirit of Jesus.’ Because of the warm environment of that first gathering, the breakfast has continued each year.”

Organized by the Fellowship Foundation and hosted by a committee of Congress members, over 3,000 people attend the event each year, hearing a variety of speakers in addition to the current president. Past deliverers of the keynote address at the function include former United Kingdom Prime Minister Tony Blair, King Abdullah II of Jordan and U2’s Bono. ABC News reports, “In 2013, a then-relatively unknown Dr. Ben Carson -- currently awaiting Senate confirmation to be secretary of housing and urban development -- delivered a scathing critique of President Barack Obama’s attempts at health care reform at the gathering. The appearance vaulted Carson to celebrity in conservative circles, eventually leading to his Republican presidential nomination in 2016.”

This year’s prayer breakfast was not without a few critiques as well.

Politico shares, “Trump was introduced at the breakfast by Mark Burnett, the producer and creator of both “The Celebrity Apprentice” as well as the show’s original version, “The Apprentice.” Trump called Burnett “a special, special friend”…But the president also took a shot at the producer who launched the reality TV show that magnified his fame and broadcast him into millions of living rooms around the country:

“When I ran for president, I had to leave the show. That's when I knew for sure I was doing it. And they hired a big, big movie star, Arnold Schwarzenegger, to take pace my place, and we know how that turned out…And Mark will never, ever bet against Trump again, and I want to just pray for Arnold, if we can, for those ratings, okay?’”

“Schwarzenegger quickly responded on his own Twitter account, publishing a video in which he addresses the president directly: ‘Hey Donald, I have a great idea. Why don’t we switch jobs? You take over TV, because you’re such an expert in ratings, and I take over your job, and then people can finally sleep comfortably again.’”

But President Trump also took a more serious tone as he shared this morning with prayer breakfast guests. He talked about how people often greet him with five words that warm his heart: "I am praying for you." He also said "so many faith leaders" have been "very, very important people to me."

Trump referenced foreign policy, telling members of the prayer breakfast not to worry about reports of his "tough" phone calls with world leaders.

"We're being taken advantage of by every nation in the world, virtually," he said. "It's not going to happen anymore."

The president promised to promote religious liberties and even called to overturn a law placing political limits on churches, while also vowing to take resolute action against terror groups who "cut off people's heads."

"It must be stopped, and it will be stopped. It might not be pretty for a little while," Trump said, according to NBC News.

“Freedom is a gift from God,” he went on. And at another point stated, “It is God who gave us life and liberty.”

On the heels of the prayer breakfast, Secretary of State Rex Tillerson opened his speech this morning to State Department employees: “Good morning all, we apologize for being late, it seems that at this year’s Prayer Breakfast, people felt a need to pray a little longer. And I certainly welcome them all.”

May we all keep on praying for our nation and leaders. They could certainly use our prayers for wisdom and strength as they lead.