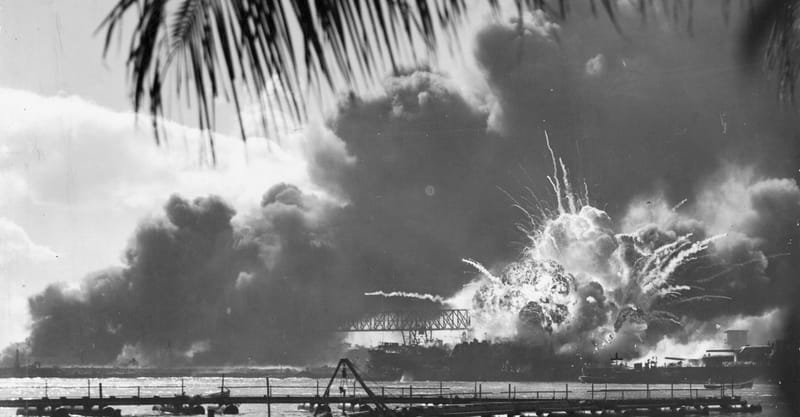 On a warm, tropical December 7th morning in 1941, Oahu’s Pearl Harbor—with its Naval ves-sels bobbing quietly along Battleship Row—welcomed the sunrise, coupled by only birdsong, the quiet lull of waves against ship hulls, and the first stirrings of soldiers going about their morning military routines. In fact, the majority of the Pearl Harbor servicemen were in the Mess Halls en-joying their breakfasts when, around 8 a.m., an unexpected barrage of Japanese fighter planes attacked the unsuspecting military base in what would be an initial onslaught lasting a mere two hours, but leaving utter devastation in its wake.

Swift and calculated, the Japanese attack destroyed nearly 20 American naval vessels and over 300 airplanes, and claimed the lives of more than 2,000 American soldiers, while wounding yet another 1,000.  Termed by then President Franklin D. Roosevelt as “a date that will live in infa-my,” this event—almost 75 years ago to the day—would officially usher the United States into World War II.

To honor this momentous occasion, and specifically those who served and sacrificed their lives to ensure our present freedoms, Pearl Harbor is hosting its 75th Commemoration of the attack. The purpose of the event is to not only honor the past, but also to inspire the future—one bright-er, and focused on peace, particularly celebrating that which has existed between Japan and the U.S  for 71 years now.

Those journeying to Oahu to join the festivities in person will enjoy a weeklong celebration (offi-cial Commemoration events begin on Dec. 1 and run through Dec. 11), which will provide plenty of opportunity to pay homage, as well as the chance to learn more of the specific details of the Pearl Harbor attack itself. But regardless of whether you’ll be making the pilgrimage to Oahu in physical body—or standing where you reside, in spirit of solidarity—it’s the same essence of honoring and remembering that will mark this 75th anniversary in our hearts and minds.

For more information about this special 75th Commemoration event, including further historical background (for those learning from home), as well as onsite receptions, addresses being made by prominent keynote speakers, free film screenings under the stars on Waikiki Beach, various live concerts and performances, memorials, and more (for those venturing to Oahu to pay hom-age), you may visit online at pearlharbor75thanniversary.com or call (toll-free) 1-877-589-8898.