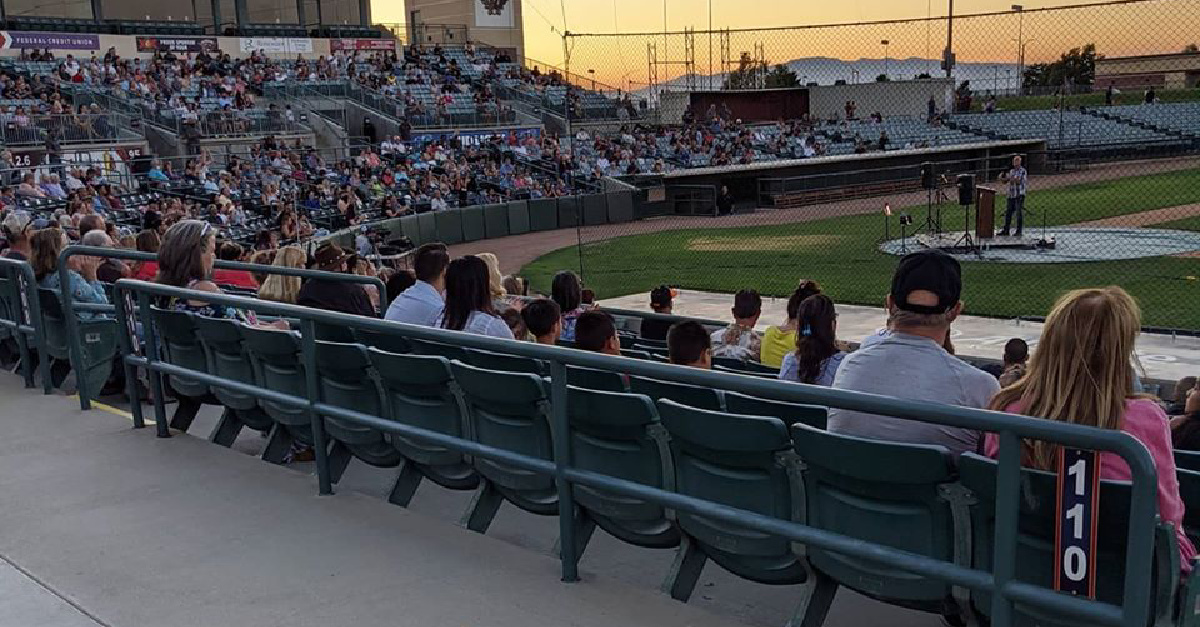 “What’s going on in California?” is the question that has been asked of me a lot this month. With the beach gatherings in Huntington Beach, along with Pastor Jack Hibbs’ and John MacArthur’s bold stances (thank you, both), we decided to launch a Saturday night service in Lancaster, California, at JetHawk Stadium. It’s being tagged the Stadium Revival.

Although the event was primarily for our local body as a way to come together, word quickly spread, and over 1,000 people showed up. We are not taking an offering, collecting names for a database, or trying to elevate our church; it’s simply a time to elevate Christ. It was an incredible event that will run through September 2020 (God willing). We witnessed salvations, recommitments, and powerful personal testimonies under the prayer tent. It showed how hungry people are to be encouraged and uplifted and even convicted. The message can be heard here, and the entire service here.

As a result of this California renewal, many have been asking, “With so much phoniness out there, what is true revival?” Simply stated, a genuine revival is God reviving His people—“Wilt thou not revive us again that thy people may rejoice in thee?” (Psalm 85:6 KJV). Revival is our only hope, and repentance is the true mark of genuine revival as what was reflected in the life of Griffith Jones, who preached during the Welsh revivals of the 18th century and said, “The tears [of the congregation] began to flow in streams down their cheeks. Soon, they wept openly, and cried out, ‘What shall we do to be saved?’”

Further, it was not uncommon for people to tremble and weep or shout for joy under the anointed preaching of George Whitefield. Whitefield was the primary evangelist during the Great Awakening that occurred in the mid-1700s. During this time, old grudges and debts were forgiven, morality improved, many were added to the church, and there was a greater sense of the fear of the Lord.

Those who use past revivals in an attempt to validate odd events today perhaps have not truly researched revivals. In reading Charismatics and Calvinists, Pentecostals and Puritans, and Acts and Azusa, as well as countless biographies of leaders such as Martin Luther, John Calvin, John Knox, John Wesley, Robert Murray M’Cheyne, Charles Spurgeon, and D. L. Moody, and Puritans such as Thomas Goodwin, John Bunyan, John Owen, and Richard Baxter, nowhere do these leaders encourage hysteria or outright weirdness that sometimes follows “revivals.”

Granted, there were times of strong conviction, such as when people held on to trees thinking that they were falling into the abyss of hell during the famous sermon Sinners in the Hands of an Angry God by Jonathan Edwards. And people did cry out to God, or fall on the ground under the strong conviction of sin during the revivals of George Whitefield, John Wesley, and Evan Roberts, but this is because sin, righteousness, and holiness were preached—“falling down on his face, he will worship God and report that God is truly among you” (1 Corinthians 14:25). This is true revival.

Perhaps a balance can be found in an excerpt from Duncan Campbell’s book, The Price and Power of Revival: “How is it that while we make such great claims for the power of the Gospel, we see so little of the supernatural in operation? Is there any reason why the Church today cannot everywhere equal the Church at Pentecost? I feel this is a question we ought to face with an open mind and an honest heart. What did the early Church have that we do not possess today? Nothing but the Holy Spirit; nothing but the power of God.”

He continues, “Here I would suggest that one of the main secrets of success in the early Church lay in the fact that the early believers believed in unction from on high and not entertainment from men ... How did the early Church get the people? By publicity projects, by bills, by posters, by parades, by pictures? No! The people were arrested and drawn together and brought into vital relationship with God, not by sounds from men, but by sounds from heaven.”

Many do not truly want revival because of fear of what it may involve. For example, a few years ago I prayed, “Lord, bring revival to the churches”—I was not ready for the response that followed. I felt impressed with these words: “You don’t want revival—it will ruin your schedule, your dignity, your image, and your reputation as a person who is ‘well balanced.’ Men will weep throughout the congregation. Women will wail because of the travail of their own souls. Young adults will cry like children at the magnitude of their sin.”

I continue, “With the strength of My presence, the worship team will cease playing. Time will seem to stand still. You won’t be able to preach because of the emotions flooding your own soul. You’ll struggle to find words, but only find tears. Even the most dignified and reserved among you will be broken and humbled as little children. The proud and self-righteous will not be able to stand in My presence. The doubter and unbeliever will either run for fear or fall on their knees and worship Me—there can be no middle ground. The church will never be the same again.”

Do you truly want revival? Again, this is America’s only hope. Are you willing to pay the price? There is a cost. We are reminded that God is merciful and slow to anger, but we must stop confusing His patience with His approval. Take a listen here.

The views expressed in this article do not necessarily reflect those of Christian Headlines.