Purim: A Joyous Occasion for the Whole Family

Purim: A Joyous Occasion for the Whole Family

If you are in Israel during the holiday of Purim, you might think Israelis had confused the spring holiday with Halloween.

Purim is supposed to be a joyful holiday and, as such, costumes and parties are the order of the day. From babies in daycare to school children to adults attending parties, nearly everyone in the country gets in on the action. Though Purim lasts only one day, or two if you are outside a walled city, costumes can be worn for a week before and after the actual date, which this year is March 19 to 20.

The Book of Esther and her miraculous positioning as Queen of Persia is the source of the holiday. The jubilation and merriment of the holiday is based on Esther 8:17: "In every province and in every city to which the edict of the king came, there was joy and gladness among the Jews, with feasting and celebrating. And many people of other nationalities became Jews because fear of the Jews had seized them." Interestingly, God does not appear at all in the Scroll of Esther.

The word Purim originate from the Persian word pur, which means "lot." The holiday was named for the lots cast by Haman, who sought the annihilation of the Jewish people exiled in Persia and refers to Haman's plt to kill all the Jews. Esther, the beautiful Jewish wife of King Ahashverus, risked her life to save the Jewish people from Haman's plot by revealing her true identity and the scheme of drawing "lots" to kill Jews to her husband. The earliest known celebration dates back to the second century C.E.

The most famous food associated with Purim is a cookie called oznay Haman, or the Yiddish word hamantaschen, meaning "Haman's ears." The cookies are filled with chocolate, dates, poppy seeds or jellies. A special hallah bread is made during Purim, braided extensively to symbolize the rope upon which Haman was hung. 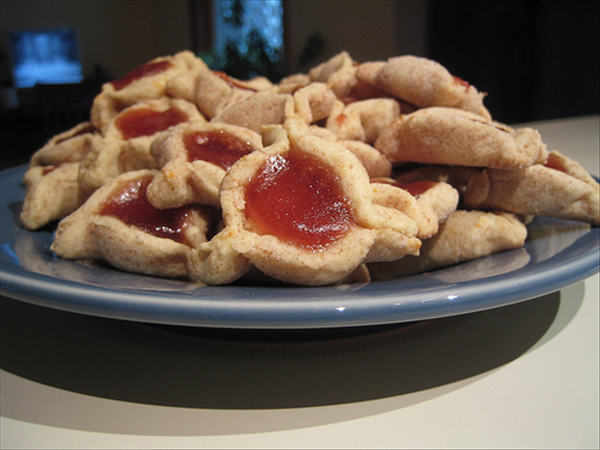 Other interesting Purim tidbits include the fact that it is mandated that people make a lot of noise during this holiday. Special groggers or noisemakers are readily available for sale in all the toy stores and during the reading of the Scroll of Esther, these noisemakers, which make a grating sound, are to be shaken at every mention of Haman's name, in order to drown it out.

Many activities are available in which to participate. And if you can't make it to any of the special events, you can always visit a synagogue as the Megillah is read aloud. Attendees boo and hiss at every mention of Haman's name.

This article courtesy of Travelujah. Used by permission. Travelujah is the only Christian social network focused on travel to Israel. People can learn, plan and share their Holy Land tour and travel experiences on Travelujah. For further information on Christian tourism to Israel please contact Holy Land Tours -- Travelujah."