The Old City of Jerusalem is famous for, among other things, its eight unique gates*, none of which are more impressive than the Damascus Gate.

Built by the Ottoman Sultan Suleiman the Magnificent in 1538 as part of a total revamp of Jerusalem's walls, the Damascus Gate featured a majestic crown-shaped parapet. But during the heavy fighting in and around the Old City during the Six Day War in 1967, the Damascus Gate's "crown" suffered considerable damage.

With so many ancient and biblical sites on their plate, it took Israeli archaeologists over 40 years to get around to it, but this year the Damascus Gate was finally restored to its original glory. 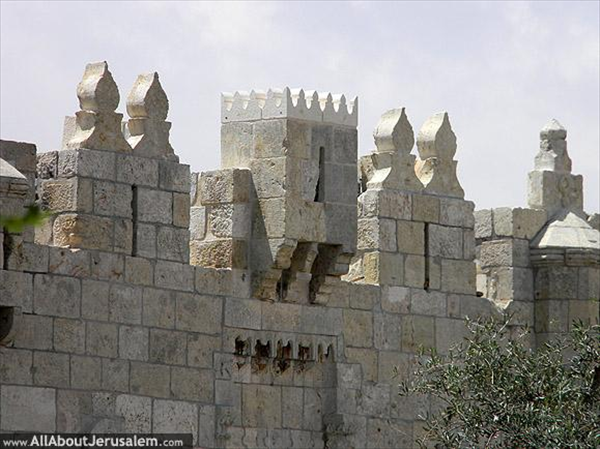 "The Old City of Jerusalem is a focus of interest for people the world over and the number one tourist attraction in Israel," said Elad Kendel, director of the Old City Basin in the Jerusalem Development Authority. "The city walls and the gates are the first thing that everyone sees when they arrive at the Old City, and it is therefore important to us that tourists, both domestic and foreign, see the city in all its glory."

The Jerusalem Development Authority and the Israel Antiquities Authority have concluded a comprehensive cleaning of the gate's ancient stones and restoration of its famed parapet.

But getting the parapet just right was no easy task. Archaeologists had to consult photographs of the Damascus Gate taken during the early 20th century when the British governed Jerusalem.

"Because of its beauty, Damascus Gate is also the most documented of Jerusalem's city gates and its historical material and numerous photographs facilitated an accurate restoration of its appearance," explained project architect Avi Mashiah. "Every single decoration, including all of its features, was studied and restored by us down to the smallest detail, in order to provide visitors to the gate as full and complete an experience as possible."

To lessen the likelihood of the "crown" falling into disrepair any time soon, the archaeologists fixed it to the rest of the gate using special undetectable anchors.

The restoration team did not stop with the Damascus Gate; they are continuing their work along the length of the Old City's walls in a large-scale effort to enhance the impact of this holy city on visiting pilgrims.

Ryan Jones writes for Travelujah, the leading Christian social network focused on connecting Christians to the Holy Land. People can learn, plan and share their Holy Land tour and travel experiences on Travelujah.

Photos of Damascus gate from AllAboutJerusalem.com.