Herod May Not Have Completed Jerusalem's Walls

Herod May Not Have Completed Jerusalem's Walls

Despite centuries of assumption that King Herod built the Western Wall of the temple in Jerusalem, recent archaeological findings could throw this accepted conventional premise on its head.

Professor Ronny Reich of the University of Haifa and Eli Shukron of the Israel Antiquities Authority said in a news conference Nov. 23 that a ritual bath exposed beneath the Western Wall of the Temple Mount contains proof that the construction of that wall was not completed during Herod’s lifetime but at least 20 years after his death around 4 B.C.

The find changes the way we see the construction, and shows it lasted for longer than we originally thought.

This confirm accounts by Josephus, the Jewish historian, who wrote that the work was only finished during the reign of King Agrippa II (Herod's great-grandson), not before that during Herod's time.

During recent excavations, archaeologists uncovered three clay oil lamps from the first century A.D. and 17 bronze coins, some dating to around 17 or 18 A.D., approximately 20 years after Herod's death, the archaeologists said.

Donald Ariel, curator of the numismatic collection of the Israel Antiquities Authority, determined that the bronze coins were stamped by a Roman proconsul, Valerius Gratus, 20 years after Herod’s death, around 17 A.D. That indicates that Herod did not build the wall and that construction was not close to being complete when he died. Valerius Gratus was the predecessor of Pontius Pilate, Reich said.

The coins were found inside the ritual bath. The find is the first archaeological evidence that supports Josephus' account.

"This bit of archaeological information illustrates the fact that the construction of the Temple Mount walls and Robinson's Arch was an enormous project that lasted decades and was not completed during Herod's lifetime," the Israel Antiquities Authority said. 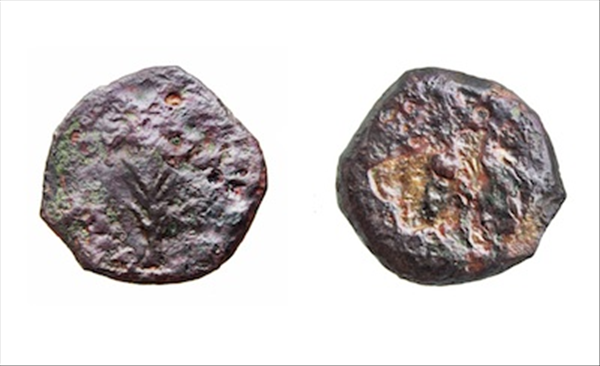