Photo: Ceremony in the Hall of Remembrance in memory of the victims of the Holocaust (Travelujah)

On January 19 and 20, the International Christian Embassy Jerusalem hosted a delegation of German and Austrian Christian leaders to mark the 70th anniversary of the Wannsee Conference. I was sent by Travelujah to cover the event.

On that fateful day of January 20, 1942, 15 high-ranking Nazi officials, convened by Reinhard Heydrich, assistant to deputy Nazi leader Heinrich Himmler, met at a lakeside villa outside Berlin to decide on the implementation of the "Final Solution of the Jewish Question," setting in motion their systematic plan to annihilate all Jews in Europe.

Seventy years later, on the evening of Thursday, January 19, the ICEJ (in partnership with Helping Hands Coalition) invited the Christian representatives together with leaders of various Holocaust survivor communities in Israel to a special reception at the Konrad Adenauer Center in Jerusalem in honor of the victims and survivors.

Dr. Susanna Kokkonen, Director of the Christian Friends of Yad Vashem, commented on the event:

"The fact that German Christian leaders of all denominations have come here to commemorate and acknowledge this event and express their solidarity with the State of Israel sends a strong message to Israelis."

Kokkonen wished that Christians take stronger action by coming to Israel and to Yad Vashem for solidarity missions in order to learn how to prevent such an event from happening again. Asked about how to stem the tide of modern anti-Semitism, she underlined the importance of education: "It's important to study and learn more about what is anti-Semitism. You can't heal something if you don't even understand the mechanism behind it."

Shaya Ben Yehuda, Managing Director of Yad Vashem's International Relations Division, contrasted the situation today with that of 70 years ago:

"I think that this event is very meaningful and symbolic: 70 years ago, we were on different sides of the war: we were in the ghettos, tortured, trapped, and those on the other side persecuted us, tortured us and tried to murder us. This event symbolizes the change that has happened along the years. It shows that when you come back to the fundamental story of the Bible, you realize that we come from the same origins and we have a common destiny."

As to the foundation for building a common future together, Ben Yehuda stressed the importance of biblical formation: "the most important thing is to educate the youth of today about the dignity and right to exist for every human being. As it is written in the Bible, we were all created in the image of God."

Dr. Jürgen Bühler, the Executive Director of the International Christian Embassy Jerusalem, reminded his guests of the dire consequences of forgetting the biblical view of the equal dignity of every human being, even for an educated and cultivated nation such as Germany:

"The Nazi officials who deliberated at Villa Wannsee over their ghastly plans for exterminating European Jewry were all well-educated, with at least half of them holding doctorate degrees. Some were also the sons of Protestant ministers, yet not one of them raised any moral objections to this heinous plot."

Five German Christian leaders then gave speeches revolving around several common themes: one of them was that Christians today must not only remember the past, but also pass on this memory to the next generation. Some told the story of how they had personally passed from having a detached knowledge of the facts of the Holocaust to a heartfelt personal repentance. They underlined how Christian leaders bear a special responsibility in continuing to express this ongoing repentance in words and deeds:

"We came here to continue the repentance of our nation for the enormous crime of mass murder of Jews committed in the name of a wicked ideology," said Bühler. "The Church in Germany still has so much more to do to amend for our deafening silence in those dark days."

The speeches were followed by a moving concert performed by a string and oboe ensemble from the German Christian Music Academy of Stuttgart.

The next day, a wreath laying ceremony was held at 11:30 at the Warsaw Ghetto Square in Yad Vashem. Ingolf Ellssel, Chairman of the Pentecostal European Fellowship, said that even today, 70 years after Wannsee, the call for Christians to repent and reorient themselves remains as needed as ever, and he underlined the power of faith in bringing healing, reconciliation, and new life.

Ellssel recalled how his own father had joined Hitler's army, and after having spent five years in Russia as a prisoner of war, he returned to Germany a broken man. Someone then shared his Christian faith with him, and in Christ, he found forgiveness, hope, and the strength to begin a new life. Ellssel concluded: "God blesses those who change their lives."

The German and Austrian Christian leaders, representing 5 million Protestant and Evangelical Christians, then silently laid their wreaths in front of the bronze statue of "The Last March" depicting the deportation of the Jews to the death camps.

The leaders were then invited into the Hall of Remembrance, where the eternal flame was rekindled, another wreath was laid, and a cantor poignantly sang the Hebrew funeral prayer "El Maleh Rachamim" (God full of mercy) in memory of the victims of the Holocaust.

"Wannsee was one of the darkest days in the history of the German people," said Gottfried Bühler, National Director of ICEJ-Germany and the initiator of the event. "Seventy years after, we bow down in deep sorrow. And we also promise to keep this remembrance alive."

Bühler added that this was the reason why many of the Christian leaders brought their children along, so the next generation could witness these ceremonies. "Yet remembrance alone is not enough; it must go hand-in-hand with responsible deeds of goodness."

Dan Diker, Secretary General of the World Jewish Congress, while expressing his gratitude to the Christian representatives for their support for the Jewish people, also warned of how the Wannsee Conference was not an isolated event but rather tended to repeat itself throughout history. He recalled how, long ago, in Persia, a man called Haman plotted to annihilate the Jewish people, and how in our own day, a new Haman is rising in modern Persia -- calling again for the destruction of the Jewish people.

The call to vigilance and action was clear: "Today's ceremonies at Yad Vashem are the answer to Wannsee," Diker stated. "The lesson is to be vigilant. This is about preventing the next Wannsee, which is already here in the Iranian threat to eradicate Israel."

At a time where conflict is increasing in the world, where mutual blame and accusation are the order of the day between opposing individuals, factions and nations, it was refreshing to witness leaders following the example of both humility and courage that they learned from their own Jewish Messiah: the humility to take responsibility for the sins committed in the past by their forefathers, and the courage to act so that they don't happen again. Two virtues which, along with mutual forgiveness, seem to be the pillars upholding the warm friendship between Jews and Christians at the event.

It is to be hoped that the same virtues will continue to be expressed and promoted at the upcoming International Holocaust Remembrance Day on January 27. May our Christian leaders take the opportunity to bring this same message back home and share it with the nations of the world. 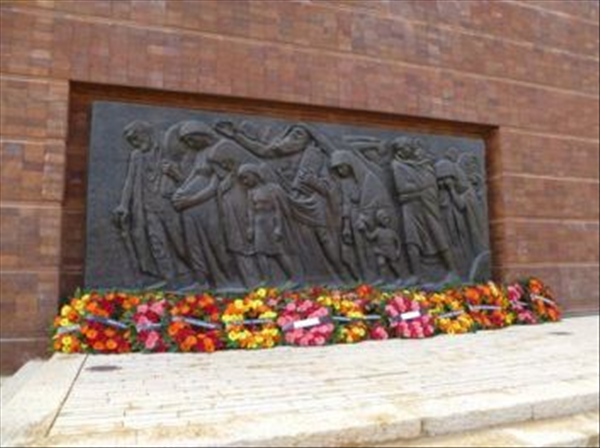 Photo: The wreaths on the Warsaw Ghetto Square at Yad Vashem

Ariel Ben Ami was born in Canada and is currently a doctoral student at the Hebrew University of Jerusalem and writes regularly for Travelujah Holy Land Tours. He is fascinated by the Jewish roots of Christianity and enjoys writing about biblical and theological topics. He is the founder and director of Catholics for Israel, a lay apostolate dedicated to building bridges and fostering reconciliation between Israel and the church.

Travelujah Holy Land Tours is the leading Christian social network focused on connecting Christians to the Holy Land. People can learn, plan and share their Holy Land tour and travel experiences on Travelujah.