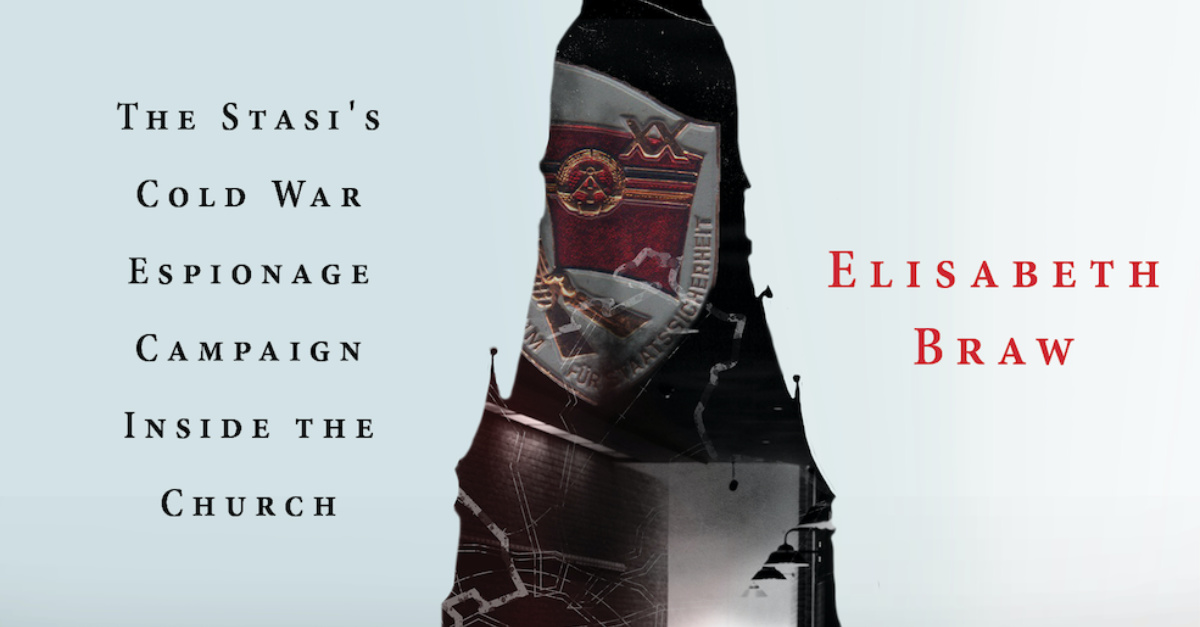 (RNS) — Before the Berlin Wall came down 30 years ago, the East German secret police, known as the Stasi, gathered information on millions of its citizens. That story has been a source of continued fascination, including for me personally; when I was in Berlin last month, I visited the Stasi Museum, housed in the former Ministry for State Security itself, and was astounded just by the sheer size of its urban campus.

What is less known about the Stasi’s domestic espionage is that it included a highly sophisticated “church department” that for four decades used a network of Christian pastors and theology professors as informants. When Berlin last month celebrated the 30th anniversary of the fall of the Wall, one repeatedly told story was of the influence of churches as centers of protest against Communism. That’s true, but there’s another side to the story — one of its religious leaders who were secretly working for the government and spying on their congregants and colleagues.

To find out more, I spoke to Elisabeth Braw, author of God’s Spies: The Stasi’s Cold War Espionage Campaign Inside the Church. This conversation has been edited for length and clarity. — JKR

How did you become interested in this topic? You share in the book that there’s a personal connection.

I became interested in East Germany when I was 14 years old in 1988. I was living in Sweden, which was geographically close but so different. My grandparents had taken me to West Germany before and thought I should see East Germany. They took me to East Berlin, and we also saw the Wall. It was like a Damascus experience for me — so strange and so different. I resolved to go back when I was old enough to do so on my own.

The next year, the Wall came down, and by the early 1990s I could return there to study. I went to university in eastern Germany, which was changing very quickly. No country in our lifetime would change that radically in so short a period.

During that time, a friend of mine, whose father was a theologian, said to me one day, “Didn’t you say that you knew Aleksander Radler?” I said that yeah, my father knew him. He was a theologian at the same university in Sweden, and they worked together back in the 1980s.

She said, “My father is being accused of having worked for the Stasi and Aleksander is defending him.” I thought at the time, “That’s wonderful; that’s what you do for a friend.”

Fast forward to 2012, and come to find out that Aleksander Radler himself had been working for the Stasi. He was somebody I had met several times as a child, so there was that personal connection. I began to realize that no book had been written about the Stasi’s espionage against churches in East Germany, the Lutheran Church in particular.

Why were the Stasi interested in pastors and theologians as informants?

Ever since East Germany was founded, it was important for the Stasi to minimize the role of churches because the churches, in particular the Lutheran Church, were very strong. The vast majority of people were Lutheran, and the Lutheran Church was also quite activist. So the regime knew from the beginning that it would have to focus on undermining the church.

Initially they went about it according to a Soviet KGB style, imprisoning pastors. That was not a sustainable approach. If you persecute people, some may get scared, but others will become even more strident in their opposition.

Also, churches had links to the West — it’s one worldwide faith. The government couldn’t cut off those contacts, but it felt it had to keep an eye on them so East German Christians didn’t get dangerous ideas. No other group in East Germany had that kind of contact. Even athletes, who would travel abroad, would not have sustained contact with Western athletes.

So the Stasi infiltrated by means of pastor agents, who were some of their most important agents. These pastors could inform on, and also influence, the decisions that different dioceses and churches were about to make.

Joachim Wiegand, director of the Stasi's “church department,” called XX/4, agreed to be interviewed for your book — the first time he has ever gone on the record. Why did he agree?

I think he decided I didn’t have a chip on my shoulder from any one perspective. I was neutral because I’m not East German. I don’t have an axe to grind. I’m also not West German. West Germans often take this slightly condescending attitude toward East Germans, and East Germans — especially those who were active in some way in the East German government — feel they are never going to get a fair hearing.

He was very forthcoming. The only thing he wouldn’t tell me was the names of agents who have not yet been unmasked. Everything else, he was happy to discuss.

He’s now 87 years old, and his mind is completely sharp. If the book had not been written now, before he dies, chances are we would never have the inside story from the Stasi.

What did he reveal that surprised you?

Where do I begin? What surprised me the most, I think, is how professionally they went about recruiting pastors. It wasn’t just, “There’s a pastor; let’s talk to him.” They were meticulous about collecting information about any prospective recruit. It was successful because they prepared so well.

Another thing that surprised me was how non-bureaucratic Wiegand was himself. He is an atheist, but because he is extremely good at his job he was able to put himself in the mindset of these pastors, and his officers understood them very well too. I expected a more brutalist approach.

You talk about the efforts among many Western churches to smuggle Bibles to the East, and that the Stasi had infiltrated that too.

Most people who were alive during the Cold War will be familiar with this enormous activity by Western Christians trying to help Christians behind the Iron Curtain. A lot of them donated money. Some helped to smuggle religious books and disassembled printing presses into East Germany and then to other countries in the Soviet sphere. It was painstaking work.

The KGB in the Soviet Union was very eager to find out how these book smuggling networks were organized. They hadn’t been able to crack that. The Stasi had a pastor who was the perfect man to infiltrate these networks. He was extremely good and would offer himself as a courier. So this is an area where we in the West intersected with the Stasi, even though we didn’t know it. If we were involved in those fantastic efforts to get Christian books behind the Iron Curtain, it’s most likely that we indirectly interacted with the Stasi.

What are you hoping readers take away from your book?

I hope it will make people realize that East Germany is not a country that just ceased to exist. These are people who are still alive, in many cases. The Cold War didn’t end that long ago. It’s still present today.

I hope the book will also make people think about what they would do in that situation. Are you brave enough to stand up for what’s right, or do you just try to make your life work within that system? Those of us who have grown up in the West often assume that we would be heroic in such a situation, but would we? I hope when people read the book they realize what a moral maze it often was, and how much it took for somebody to stand up for what is right, and how easy it is to slip into immoral behavior.

We all want to think we would be like Vaclav Havel, but most of us would probably be like the low-level functionary who doesn’t like the system but adjusts life to it anyway. It’s the path of least resistance.

Finally, did your acquaintance Aleksander Radler agree to be interviewed?

No. Beyond the initial Swedish tabloid stories, he has said he can guarantee 150% that he had never spied for the Stasi. I emailed his wife to ask if he wanted to be interviewed and he declined. Which is not surprising, because he’s not going to admit to having done anything.

You can compare that to the brutally honest attitude of [fellow spy] Jürgen Kapiske, whom I also interviewed, and who was ready to talk about his Stasi activities. What he told me in the book is essentially his testament. You gain a lot of respect for Kapiske, who clearly did things that were not good, but at least he decided that he wanted to be honest about it and have people know about it, to help prevent things like these from happening again.