What Would the Discovery of Extraterrestrial Life Do to Our Faith? 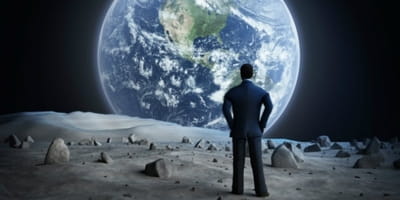 What Would the Discovery of Extraterrestrial Life Do to Our Faith?

“I'm shocked at the countless hundreds of millions of dollars that have been spent over the years in the desperate and fruitless search for extraterrestrial life," Ham wrote recently. “Of course, secularists are desperate to find life in outer space, as they believe that would provide evidence that life can evolve in different locations and given the supposed right conditions! The search for extraterrestrial life is really driven by man’s rebellion against God in a desperate attempt to supposedly prove evolution!”

Certainly many evolutionists—perhaps starting even with Charles Darwin himself—see the theory as an alternative, nontheistic explanation to the origin and development of life on earth. “I cannot persuade myself,” the 19th century naturalist once said, “that a beneficent and omnipotent God would have designedly created parasitic wasps with the express intention of their feeding within the living bodies of caterpillars.”

One might reasonably suspect that at least some secular scientists wish to find evidence of “exobiology” (life outside of the earth) not only because of the immense, intrinsic scientific worth of such a discovery, but because it might give some sense of meaning and transcendence to people who have been encouraged to jettison belief in a loving Creator like a used solid rocket booster.

Atheist apologist Richard Dawkins has summed up the purpose of life from this perspective: “We are survival machines – robot vehicles blindly programmed to preserve the selfish molecules known as genes. This is a truth which still fills me with astonishment.” While Dawkins is astonished, many of his fellow “robots” are rightly appalled. After all, this kind of atheistic reductionism provides a pretty flimsy foundation for morality and purpose.

Thus the search for ET continues, at an accelerating pace, in an era of economic uncertainty. What’s the payoff? Recently NASA astronomer Kevin Hand said, “I think in the next 20 years we will find out we are not alone in the universe." This prophecy is as much a faith-based statement of theology or philosophy as it is of science.

Of course, the Christian already knows “we are not alone in the universe.” We are, as others have said so aptly, the “visited planet.” The Bible tells us repeatedly of earthly visitations from spiritual beings—popularly called angels and demons—from other dimensions, perhaps even other universes. The descriptions of these creatures, truly, are stranger than science fiction. Here’s just one example:

As I looked, behold, a stormy wind came out of the north, and a great cloud, with brightness around it, and fire flashing forth continually, and in the midst of the fire, as it were gleaming metal. And from the midst of it came the likeness of four living creatures. And this was their appearance: they had a human likeness, but each had four faces, and each of them had four wings. Their legs were straight, and the soles of their feet were like the sole of a calf's foot. And they sparkled like burnished bronze. Under their wings on their four sides they had human hands. And the four had their faces and their wings thus: their wings touched one another. Each one of them went straight forward, without turning as they went. As for the likeness of their faces, each had a human face. The four had the face of a lion on the right side, the four had the face of an ox on the left side, and the four had the face of an eagle. Such were their faces. And their wings were spread out above. Each creature had two wings, each of which touched the wing of another, while two covered their bodies. (Ezek. 1:4-11)

And of course Christians believe that the ultimate Visitor to Planet Earth was the eternal Son of God, who “became flesh and dwelt among us” (John 1:14) and who one day will be “coming in clouds with great power and glory” (Mark 13:26).

Yet if scientists ought to examine their motives and assumptions with regard to the possibility of extraterrestrial life, then surely Christians ought to, as well. Is our faith only valid, our significance only secured, if we live in a young, small universe barren of other forms of life? Put another way; is our God to be praised more if He creates less?

I can’t help but think of the myriad upon myriad examples of life inhabiting the earth’s crust and percolating in its underwater volcanoes, all without the supervision—even the knowledge—of human beings, who nonetheless are the crown of God’s creation (Psalm 8:5). Is it so incredible that the Lord of life might employ this principle on an even grander scale in the vast, ancient, and expanding universe that He created for His own glory?

Theological questions abound, of course. Writing for the science- and future-oriented site, i09.com, Mark Strauss asks some of them. “How would the world's religions react to the discovery of extraterrestrial intelligence?” Strauss muses. “There is, of course, no single answer. But for Christians who believe in the redemption of humanity through a singular event—the Incarnation of God through Christ—the question poses an especially complex dilemma.”

Noting that modern Catholic theology would be untroubled by the prospect of extraterrestrials, Strauss quotes Father Jose Funes, a Jesuit astronomer and director of the Vatican Observatory: “This does not conflict with our faith because we cannot put limits on the creative freedom of God.”

However, Strauss notes that the uniqueness of Christ and His death for sinners, as declared in the Bible, would have to be harmonized with the discovery of intelligent alien life. Strauss mentions six possible theological positions:

Of course, Strauss neglects to mention another theological possibility—that extraterrestrials are not, like the unfallen angels, lost, and thus do not need salvation. It was this scenario that formed the basis of C.S. Lewis’s Space Trilogy. Perhaps the earth is unique in the cosmos not in having intelligent life, but in being the lone outpost at which that life, against its evident self-interest, rebelled against its Creator.

This last option makes a lot of sense, at least to me. After all, if the overwhelming evidence of fine-tuning for intelligent life in the laws of nature and the Strong Anthropic Principle point so strongly to the special place of humanity in the cosmos, then I find it reasonable to suspect that we are special in other ways, as well.

Ultimately, however, my faith does not turn on whether extraterrestrials exist. I’ve learned to hold my scientific opinions lightly, knowing that, when it comes even to physical reality, we still “see through a glass darkly.”  I’m mindful of how much trouble the Roman Catholic Church got into (and still faces) after it arrogantly opposed Galileo in favor of a theologically unnecessary, disastrously incorrect heliocentric view of the universe.

Science, despite its flaws (including its captivity to human sin), ultimately is a self-correcting process that, more or less, leads us to truth with a small “t” in the created order. This “truth,” whatever it turns out to be with regard to life in God’s universe, will complement and never contradict God’s Truth, which is found with certainty only in God’s Word.

Stan Guthrie, a Christianity Today editor at large, blogs at http://stanguthrie.com. His next book, God's Story in 66 Verses: Understand the Entire Bible by Focusing on Just One Verse in Each Book, is due out in January from Thomas Nelson.