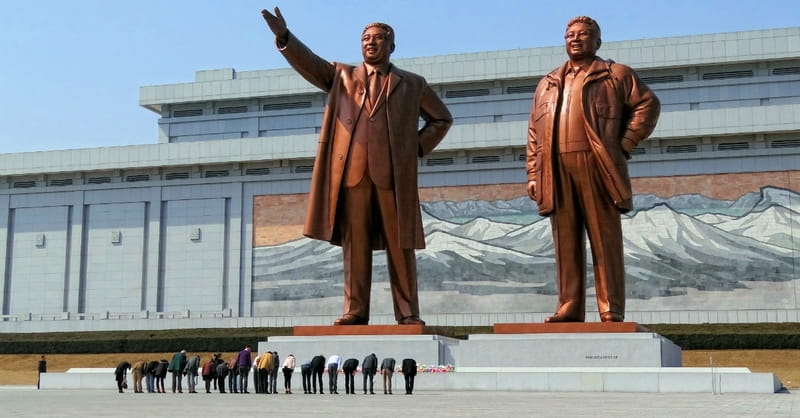 President Trump’s hostile rhetoric against North Korea is being met by ominous threats against the United States from that country’s leader, Kim Jong Un, and his regime.

That much is clear from reporting by Nicholas Kristof of The New York Times, who found Kim’s threats echoed by both military and Foreign Ministry officials.

The tone of my own encounters with North Koreans was quite different when I visited there six years ago.

I went with Dyon Chang, the founder-owner of the Forever 21 clothing chain and a South Korea-born American citizen.

Chang had learned about floods and landslides that had devastated several villages in the northern part of North Korea. Crops had been destroyed and people were dying of hunger.

Chang, a devout Christian, arranged to have tons of flour, corn and cooking oil shipped to those villages, with two stipulations.

One was that each bag and container had to have a cross on it, with the words in Korean: “Love your neighbor as yourself.” Second, he had to visit the villages to be sure that the supplies were being distributed there.

We were driven by a high-level government official for 10 hours north of Pyongyang. When we arrived at the villages, we were greeted by women and children, who sang words of welcome and gratitude.

An encounter in one of those villages was particularly memorable. As we were getting ready to leave, a young mother carrying her child, a boy not yet a year old, came over to me and held out her child, clearly wanting me to take him in my arms.

She had a pleading look on her face. She clearly wanted me to do something.

Hugging the boy, I closed my eyes and prayed for him, asking God to keep him safe and healthy. When I opened my eyes I kissed the child on the forehead and handed him back. She smiled, with tears streaming down her cheeks.

Our government hosts took us to a worship service at a church built by Presbyterian missionaries early in the 20th century.

We were told that it was one of the four legally permitted Christian worship services in the country. That it was not a one-time event staged for us was confirmed by German and Canadian diplomats who were present — they told us they worshipped there each week.

I was especially taken with the church’s choir, about 20 members who wore the kinds of robes that could be seen in many local Protestant congregations here in the U.S. They sang, in Korean, an evangelical favorite: “What a Friend We Have in Jesus.”

As they were singing the verse, which describes how Jesus understands when we are “weak and heavy laden, cumbered with a load of care,” I saw tears streaming down the cheeks of one of the choir members.

The little boy whom I held in the village should be about six years old now. I still pray for him. And I pray also for the woman in the choir whose tears I saw.

I despise Kim Jung Un, North Korea’s leader. But I don’t want us to declare war on his country. I offer up my prayers for peace regularly, but for me those prayers are associated with the tears on two faces.