The Bible Tells Us So: Concern for Immigrants is at the Heart of Faith 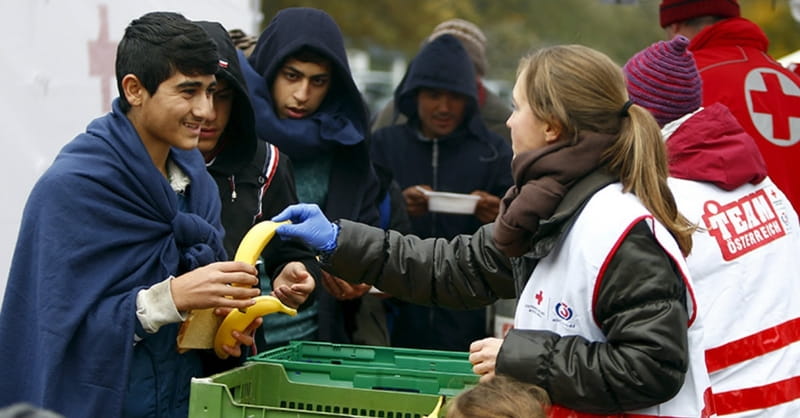 The Bible Tells Us So: Concern for Immigrants is at the Heart of Faith

Concern for the well-being of resident aliens has always been front and center of the Christian faith, and that should be no surprise given Christianity’s Jewish roots.

Centuries before Jesus reminded his followers to welcome strangers as they welcome him (Matthew 25:35), “undocumented immigrants” were on one of the most oft-repeated lists in the Hebrew Scriptures: Three groups of people that Yahweh constantly singled out for special care were, in fact, orphans, widows and resident aliens.

Of all people, Jews had a unique reason to treat such people with special kindness. “You shall not oppress or wrong a resident alien, for you were once aliens in the land of Egypt,” as God says in Exodus. Yahweh is simply reminding the Chosen People of their own salvation history, a history that included a stay of more than 400 years in someone else’s country.

Our ancestors in the faith always worried about people who had no “clout,” individuals who couldn’t defend themselves when push came to shove. Widows — women without a man to support them, as was the custom of the day — clearly fit this category, as did orphans.

Resident aliens were in the same boat. They were foreigners, inhabitants in a strange land. Then, as now in many countries, all three could easily be taken advantage of.

The late Scripture scholar Hans Walter Wolff frequently reminded us that the Israelite monarchy was a unique institution in the ancient world. Monarchical governments normally came into existence to protect the interests of the wealthy and influential. Jewish kings, on the contrary, were put in power to protect the rights of the poor and downtrodden.

During the biblical period, it was presumed everyone had a “go’el” (often translated as “redeemer”), a person who would “get you out of hock” when problems arose. Usually this was a close relative – a father, brother or son. Or, in some situations, a distant relative, as was the case with Boaz in the book of Ruth. The king was expected to fulfill this role for orphans, widows and resident aliens. He was supposed to personally step in and defend their rights. His door was to be open to them 24/7.

As any serious reader of Scripture knows, it didn’t take long for many of King David’s successors to put their go’el obligation on a back burner. Imitating the behavior of their neighboring, pagan kings, they became notorious for being more concerned for their own needs than for the needs of their people. They, not the helpless, benefited from their power. It was left to Yahweh’s prophets to force the issue.

We find a classic case of such a king-prophet confrontation in I Kings 21. Influenced and aided by his pagan queen, Jezebel, King Ahab not only steals his neighbor Naboth’s vineyard, but the conniving couple eventually has him stoned to death. Except for the prophet Elijah, no one seems to have made a public issue of the atrocity. The narrative of his stinging encounter with Ahab in the stolen vineyard is one of Scripture’s most powerful passages.

From the days of Deutero-Isaiah, the biblical problem for those who would persecute an undocumented immigrant is no longer just a case of looking over their shoulder, fearing an encounter with a government entity. Now they have to worry about God righting the wrong they’ve inflicted on these powerless individuals.

One of the last of the scriptural prophets — Malachi — couldn’t be clearer: “I (Yahweh) will be swift to bear witness … against those who oppress the hired workers in their wages, the widow and the orphan, against those who thrust aside the alien, and do not fear me, says Yahweh of hosts” (3:5).

In referring to the temple as a “den of thieves,” Jesus is in fact harking back to Jeremiah 7, a passage in which the prophet accuses people of replacing concern for the helpless with liturgical worship.

The temple cleansing completely dovetails with Jesus’ constant concern that his followers be committed to caring for others, especially those with no clout.

As I mentioned at the top of this article, Matthew 25:31-46 presents us with Jesus’ well-known Last Judgment narrative. In each instance, he warns his disciples that they’ll be judged only on what they did to assist the helpless around them … including the strangers they encounter.

Scholars of early Christianity tell us that practicing hospitality toward strangers was one of the practices most frequently employed by first- and second-century disciples of the risen Jesus as they sought to imitate the Savior in their daily lives.

They didn’t have far to go to find occasions when that could be accomplished. Though I can’t remember the author or the publication, I recall once reading an article in my doctoral program with a title that summed up the original Christian message: “Saved by Practicing Faith, Hope, Love and Hospitality.”

Another unknown author — the writer of the letter to the Hebrews — also reminded his readers of what was at stake: “Do not neglect to show hospitality to strangers, for by this some have entertained angels without knowing it.”

We presently live in an environment in which — for political reasons — fear of undocumented immigrants is frequently stressed. Though coming into contact with strangers always provokes some anxiety in our hearts, Jesus assures us that when we encounter such individuals we are really encountering Jesus.

It’s possible that worrying about the consequences of coming face-to-face with resident aliens has stopped many of us from experiencing the risen Jesus in our daily lives, something our ancestors in the faith believed was an essential element of that faith — no matter in what country they lived or from what country the aliens came.

As other Christs, they assumed an obligation to be their go’el. We believers can do no less today.

The Rev. Roger Vermalen Karban, a Catholic priest in the Diocese of Belleville, Ill., is a Scripture scholar and widely published writer

Photo: Migrants recieve bananas, soup, bread and tea before crossing the Austrian-German border in Achleiten, Austria, across from Passau, Germany, on Oct. 29, 2015.