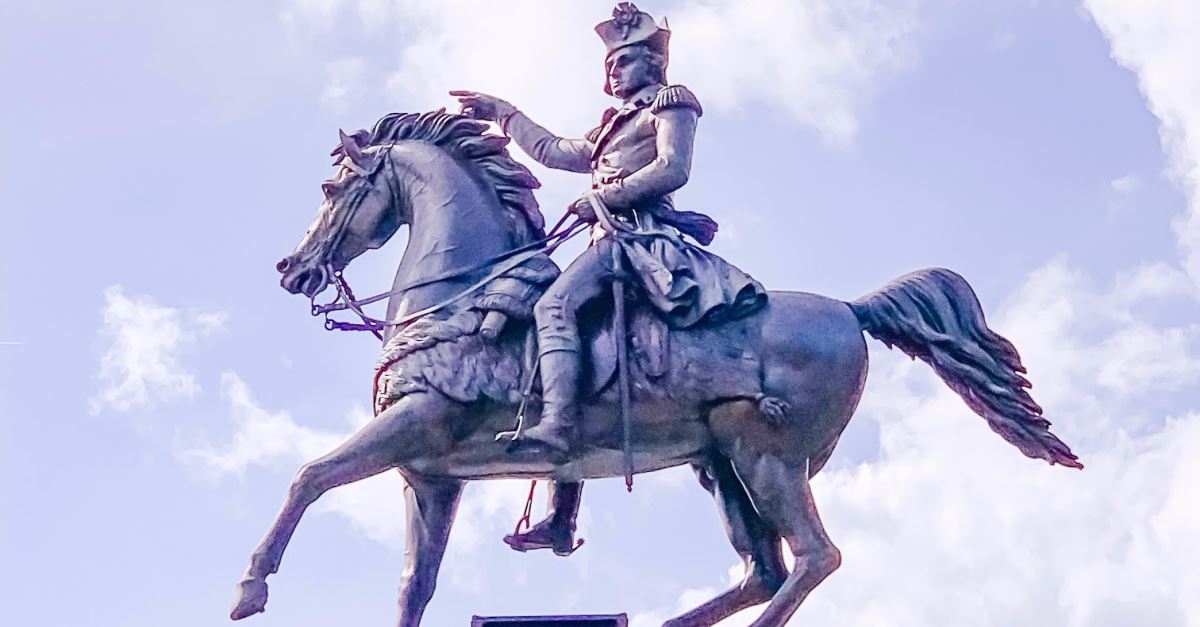 Could a contrast between the American Revolution and the French Revolution be relevant to today’s conflicts? I think so. The attempt to demote historic icons, like George Washington, is a case in point.

George Washington grew up as a gentleman farmer in Virginia and was a fourth-generation slave-owner. But by the end of his life, he had decided slavery was immoral and so at his death, he freed his slaves and made provision for them.

But in our day – where the alleged “right to not be offended” often seems to trump the constitutional right to free speech – some are calling for images of George Washington to be torn down, like statues of Confederates.

The dailywire.com (5/2/19) reports on how “George Washington High School” in Northern California is contemplating tearing down two 1930’s panels featuring George Washington because the pair of murals allegedly “traumatizes students and community members.”

This is in San Francisco, so the outcome seems likely.

How long will our historical iconoclasm last? The cultural Marxists are working overtime to cut Americans off from our history.

I believe that despite his flaws, including being a slave-owner, there are many heroic aspects of our first president. Dr. Peter Lillback and I wrote, George Washington’s Sacred Fire, which puts all this in context. Recently we discussed Washington and slavery.

Our founders fought the American Revolution, led by Washington, so that we could enjoy our God-given rights. Though slow in coming, recognition of those God-given rights eventually gave the slaves their freedom. What is happening in the culture wars today is a revival of the French Revolution, which waged war against God.

France in 1789 fought against injustice, even in the church; but their godless “cure” ended up being worse than the disease. The French Revolution was anti-God and pro-tyranny – leading to death in the streets. The American Revolution was pro-God and pro-freedom.

America’s founders mentioned God four times in the Declaration of Independence. They identified King George III’s tyranny as illegitimate – because he was violating our God-given rights. The founders, with a firm reliance on the Lord, laid down “their lives, their fortunes, and their sacred honor” in support for their declaration as a new nation.

When George Washington first read the Declaration to his troops, one of his first acts was to hire Christian chaplains – systematically, throughout the army. He felt that if we were to win this war, it would only be with God’s help.

And he and the other colonists felt that God didhelp. To paraphrase Washington in his First Inaugural Address, no people should be more grateful to the Lord than we Americans because God aided us at every step to become an independent nation.

Consider a few further contrasts between the American Revolution and the French Revolution.

Our framers signed the Constitution in “the year of our Lord” 1787. The French Revolutionaries got rid of the Christian calendar; and so they declared 1791 as Year 1 of their new non-Christian calendar.

The French Revolutionaries desecrated Notre Dame Cathedral, disallowing Christian worship there and placed a half-naked woman on the altar, calling her “Reason,” whom they worshiped.

In contrast, our founders hired Christian chaplains for the military and also for the House and Senate. Since there weren’t enough church buildings in Washington, D. C., they held Christian worship services in the Capitol building. Presidents Jefferson and Madison attended those services.

The French Revolution eventually consumed its own. Since then, France has had 17 different governments, while the U.S. still lives under one – the Constitution.

I predict that today’s social justice warriors, who are consuming our past heroes, will one day be consumed themselves by future revolutionaries. Future generations could look back at us and say things like: “You had 4D sonograms documenting the humanity of the unborn and yet you allowed millions of abortions on demand?” or “Science has documented genuine differences between men and women, yet you allowed boys who claimed to be girls to compete and dominate in sports, winning valuable scholarships?”

Slavery was evil. Thank God for those strong Christians who defeated it. Thank God for William Wilberforce’s Christian anti-slavery crusade, which took him about five decades to complete. That crusade inspired abolition here in America. Interestingly, in his day, Wilberforce was sometimes called “the George Washington of Humanity.” Both men worked hard to liberate others.

Slavery has plagued humanity from the beginning of time and can even be found in some places today, places where the gospel of Christ has no sway.

Too bad the children of the French Revolution are rising up today to cut us off from our past heroes. There is a reason Washington continues to be a hero to millions. Enough with the historical revisionism.