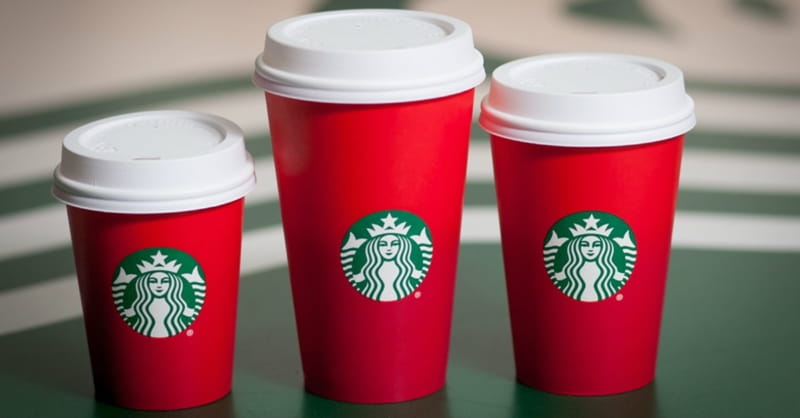 When it comes to outrage, the Internet abhors a vacuum.

The latest missives in the continuing culture wars have come from different sides of Christianity over, of all things, the new design of the Starbucks red cup. This year’s rollout saw a plain red cup, rather than the decorated cups of Christmas past, and one guy got mad.

Joshua Feuerstein is an “American evangelist, Internet and social media personality.” He used to be a pastor, but has had some success now as a maker of YouTube videos, which put his raspy voice and confrontational manner to good use.

A few days ago, Feuerstein went to a local Starbucks wearing his Jesus shirt and carrying a gun (because Starbucks hates the Second Amendment, he claimed). He told some unwitting barista that his name was “Merry Christmas,” so that they would have to write that Christian message on his cup, and then uploaded a video to Facebook encouraging his followers to do the same: “I think in the age of political correctness we’ve become so open-minded our brains have literally fallen out of our head,” he said. So THAT’S why he’s always wearing that backwards baseball cap.

Nearly 2 million people “like” Feuerstein’s Facebook page, so people started talking. The video got over 150,000 likes, and nearly half a million shares. The top comment was from a woman who worked at Starbucks correcting Feuerstein and suggesting that people “don’t just blindly follow things because someone uninformed says it out loud.”

Confirmation bias is the psychological principle that people seek out information that will reaffirm what they already believe to be true. This can lead to poor decision-making, and it is at the root of the hot take economy: “See? What that person did was terrible, because their beliefs are terrible. My beliefs are better, and I would never do something like that.”

None of the articles decrying some amorphous group of “Christians” for hating on Starbucks took into account that this whole thing was actually about one guy who makes his living creating outrageous content. But neither have the Christian responses, which have roundly condemned “these people” who want to put the Christ back in Starbucks, because they haven’t bothered to see if they actually exist.

We believe that there are other Christians out there who will turn anything into a battle in the culture war, and we rush to denounce them. (I’m including myself here in SO MANY WAYS.)

There is a very tiny group of people out there who want to have “Merry Christmas” written on their Starbucks cups, and more power to them. It will get literally nothing done, and they are being very silly. But that’s it! We don’t need to shed more ink or anguish over why those Christians are doing a ridiculous thing, especially not if the whole point is to separate ourselves and our evolved faith from other people and their immature faith. Superiority is not a good look for Christians.

Laura Turner is a writer and editor living in San Francisco. She is interested in the intersection of church and culture.