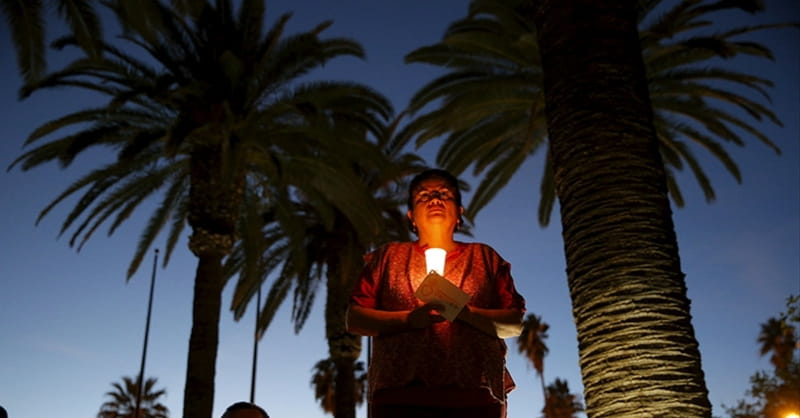 In the wake of the San Bernardino massacre last week, “prayer shamers” presented a false choice between implied inaction (prayer) and one course of action (new gun laws). In perhaps the most blatant example, the cover of Thursday’s New York Daily News featured prayerful tweets from House Speaker Paul Ryan and other members of Congress, with this commentary: “(C)owards who could truly end the gun scourge continue to hide behind meaningless platitudes.”

Such responses got both prayer and policy wrong. In the face of grave evil, the act of praying acknowledges our and others’ need for a peace that passes human understanding as we grapple with questions of mortality and transcendence.

On policy, these responses failed to acknowledge the complexity of the situation and the need for earnest debate about solutions. Facts have already shown that the oversimplification needs revision. By Friday (Dec. 4), FBI Director James Comey said his agency’s investigation was treating the rampage as a terrorist attack, and in his Sunday night Oval Office address President Obama described it as an act of terrorism. Each day has brought new details to light.

Coming to grips with terrorism in our midst is a much more daunting prospect than the prayer shamers’ derisive comments would suggest. Wisdom and civility demand better: Pray. Debate. Act.

Debate has been the missing element time and again on a range of issues. Leading voices have suggested, for example, that stewardship for the environment requires international climate accords. Or that compassion for the poor mandates increased federal spending on welfare programs. By presenting their preferred action as the only legitimate recourse, such voices falsely portray debate as resistance to action rather than the appropriate means of weighing competing courses of action.

For environmental activists, care for the planet translates to national and international action against global warming. But many analysts warn that international gatherings like the Paris climate talks focus on elusive, arbitrary and often counterproductive goals (namely, “to keep global warming below 2 degrees Celsius” compared with preindustrial levels) that will displace policies and activities that yield actual environmental benefits.

These analysts question the modeling on which the international agenda is premised; climate modeling, for example, predicted more global warming than has actually taken place over the last decade and a half. They argue that the regulatory agenda to cap carbon emissions pursued in Paris would hurt the poor and prevent economic development — the very kind of development that would lead to technological improvements and reduce pollution. Too often, activists have sought to silence such points of debate by labeling their opponents “climate deniers.”

Meanwhile, compassion for the poor is often equated with more federal anti-poverty spending. But the United States has spent $24 trillion on the War on Poverty in the last half-century, and the poverty rate remains nearly as high as it was when President Lyndon Johnson launched his initial attack.

If we were going to win this war with spending, we would have done it a long time ago. Something deeper and more complex is going on. Looking at patterns of poverty here in the United States, it is clear that domestic poverty is closely associated with the absence of married fathers in the home and a lack of work. A child born and raised by a single mother is about five times more likely to face poverty than one born to a married mother and father. Even in good economic times, the median poor household with children is supported by roughly 1,000 hours of work a year (the equivalent of 20 hours a week).

That’s why welfare reform efforts have focused on offering a hand up, not a handout, by requiring welfare recipients to work or prepare for work as a condition of receiving assistance. The policy recognizes the significance of work for human dignity and the success of work as an anti-poverty strategy. This approach helped reduce welfare rolls by half and led to historic lows in child poverty after the last major reform in 1996. Even so, when similar proposals are made today, some defenders of the status quo resort to impugning the motives of reformers as anti-poor rather than debating competing approaches to alleviate poverty.

The United States faces serious issues — from poverty to environmental challenges to radical Islamist terrorism. We can’t afford not to debate the diagnoses of these problems and the best solutions.

As the turning of another year brings new uncertainties, the need for prayer is real. Action is essential. And debate should not be denied.

Jennifer A. Marshall is vice president for the Institute for Family, Community and Opportunity at the Heritage Foundation and senior research fellow at the Institute of Theology and Public Life at Reformed Theological Seminary in Washington, D.C.

Photo: Elvina Guerrero, 57, holds a candle during a vigil on Dec. 7, 2015, for San Bernardino County employees after the Dec. 2 shooting in San Bernardino, Calif.