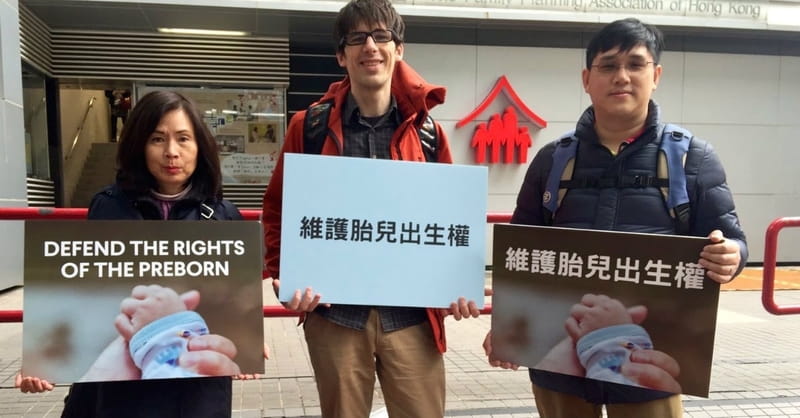 When Joseph Woodard answered God’s call to be a light in Asia, it was more than simply stepping out of his comfort zone in suburban America. Woodard grasped the torch of pro-life prayer, a movement shining brightly since 2004 when 40 Days for Life and Bound4LIFE launched within the same month.

He moved to Shanghai, China in 2010 to teach English. Two years later, Woodard ended up in Hong Kong, where he led the first 40 Days for Life prayer campaign this past spring—part of a movement that involved more than 120,000 people praying in 273 locations across 25 nations, including daily at the U.S. Supreme Court.

To capture a snapshot of what God is doing in Hong Kong—including how the symbol of Life Tape played a role in their pro-life advocacy—we spoke with Joseph Woodard about his personal journey and why standing for life matters in every nation.

Bound4LIFE: What brought you to Hong Kong?

Joseph Woodard: Originally I had a very general calling to China and then I realized that Hong Kong would be an ideal place for long-term work in Asia.

God never told me, in so many words, to be a missionary in Asia; I simply thought of myself as a Christian whom God had called to China. I eventually decided to move to Hong Kong, specifically because I saw a special work of the Holy Spirit among churches here.

Bound4LIFE: How did you become a part of the 40 Days for Life movement, starting with the campaign this past spring?

Joseph Woodard: I heard about it a long time ago, but only participated in one 40 Days for Life prayer gathering—for about an hour when I was a student at Ave Maria University. Honestly, I thought 40 Days for Life was a great idea, but not for me. Last summer I realized God was opening a door in Asia for pro-life ministry, which tragically has been almost nonexistent.

When I spoke with an experienced pro-life leader for advice, he suggested 40 Days for Life would do more than anything else to serve churches to respond to the crisis of abortion. After that, I spoke to the 40 Days for Life international campaign director in London—actually while I was in the middle of watching the movie Mission: Impossible. Some would call our mission in Hong Kong “impossible,” but we decided to go for it!

Bound4LIFE: What challenges did you face in assembling a team to pray continuously?

Joseph Woodard: So I had already lived in Hong Kong for over three years at this point. I had done a lot of work with a number of churches, but I hadn’t initiated a prayer campaign for non-English speakers before. Honestly, I was worried about translation issues and would have preferred that someone from Hong Kong lead the campaign.

But I was able to overcome some of the language barrier by being able to type Chinese better than I can actually speak it. Nearly everybody I know uses a smartphone; even when I was talking with someone who didn’t know English, we were able to communicate thanks to Google Translate.

As far as filling up the prayer schedule, we really wanted to have 12-hour shifts (8am–8pm) per day during the prayer campaign. We only actually filled up the entire 12 hours a few times during the 40 days. But at the same time, I consider the whole experience a great success.

Thankfully, no one was against the idea of praying outside an abortion center. The problem was that the concept was completely new, even for churches I worked with. Out of 125 volunteers who signed up to pray in front of the Planned Parenthood clinic, only three had done this before. We were very moved by the number of participants.

Bound4LIFE: Over the course of those 40 days, do any experiences in front of the abortion center in prayer stand out—either yours or from your team?

Joseph Woodard: We prayed in what was probably the most unusual setup of any 40 Days for Life campaign. It was within a public area, where people often sit to drink beer or smoke. One day, I recall so many people smoking—cigarette smoke rising all around us; it happened to be the day a local House of Prayer community joined for an hour.

One of the volunteers told me later that had he wanted to put on his Life Tape and pray prayers of spiritual warfare. But the Holy Spirit told him just to worship. I believe the incense of true worship is our best weapon against the culture of death. Many of the volunteers really liked the idea of the Life Tape, being able to proclaim life on behalf of the voiceless.

During Hong Kong’s first March for Life, some leaders had everyone put on Life Tape, and then we marched for two hours through the busiest neighborhoods in Hong Kong. They were holding signs, many wearing Life Tape, praying and others singing. It was really amazing. That was definitely one of the main highlights for everybody.

Bound4LIFE: The freedom of public assembly is recognized by Hong Kong. How does this right influence your ability to gather with volunteers to pray?

Joseph Woodard: Overall, Hong Kong is one of the freest places in the world. According to the Cato Institute’s Human Freedom Index, Hong Kong tops the list—which is an anomaly, the only very free society in the world that is not officially a democracy.

There are all sorts of public gatherings in Hong Kong every day: celebrations, public awareness events, big fundraisers, protests, etc. Hong Kong police are very helpful in facilitating the gatherings and really don’t care why you’re gathering, as long as you’re not blocking traffic.

Right when we were starting 40 Days for Life, there was actually a series of small riots. This dominated the news cycle because—despite what you might see on the news—Hong Kong is a very peaceful place. So the police were on high alert. Thankfully, we had communicated clearly with the police about what we were doing before the campaign started, even though legally we didn’t have to tell them anything.

Better to communicate directly than for the police to hear about us from the abortion center. It’s hard to believe the reach of Planned Parenthood, which is directly affiliated with the abortion facility we prayed at for 40 days. Overall, we felt supported by the police. I believe the prayers we prayed months in advance gave us favor during the spring campaign.

Bound4LIFE: Can you describe the differences between Hong Kong and mainland China as it pertains to standing for life?

Joseph Woodard: In Hong Kong there is freedom of religion, and the church is very active in public life. Even if people don’t go to church and don’t know anything about Christianity, there is still the opportunity to be influenced by Christian principles like the dignity of the human person and the rights that accompany that dignity.

However, in mainland China, people don’t have a sense of the individual’s rights including the right to life. Because of that, in some ways it is much easier for this issue to make sense in Hong Kong. Whereas in China, it is going to be even more countercultural to stand for life.

Bound4LIFE: What milestones have you seen happen with the pro-life prayer movement in Hong Kong since you relocated?

Joseph Woodard: Right after I moved to Hong Kong, a newspaper article covered a story about a major abortion center that had shut down in the central business district. The article quoted a local leader as supporting the clinic shutdown and described a gathering praying for a culture of life in Hong Kong.

For three years, I had been looking out for anyone doing pro-life ministry in Hong Kong. But I came up empty. Then right after I decided to do 40 Days for Life, I started meeting people; it was totally providential. Within several weeks, I had met most of the main pro-life leaders in Hong Kong and many from elsewhere in Asia.

Bound4LIFE: What core message do you want the American church to know about the pro-life prayer movement in Hong Kong?

Joseph Woodard: Hong Kong is uniquely positioned to influence all of Asia. Regardless of the nature of the cause, Hong Kong has become an attractive place for people to set up shop to advocate for various causes. Whether it’s animal rights or the pro-life movement or starting a new business, Hong Kong is the place to be to get things done.

For that reason, it’s worth praying for Hong Kong and also worth coming. If God calls you to Asia, then Hong Kong is a good place to start.

When we started this spring, I had some health problems that made it difficult for me to walk. God has really carried me through this whole process. While I still deal with chronic fatigue, the sense I have is that I’m being carried. I believe God wants me to be a part of what He is doing in this part of the world.

Marisa Lengor Kwaning is a writer, editor and health policy analyst who resides in Washington, D.C. She has worked in public health, disaster management, as well as foreign and domestic health policy. She earned a Masters degree in Public Policy from George Mason University. She currently consults at Final Draft: Writing Services and writes for Bound4LIFE International, a faith-based pro-life organization.