On Oaths and God 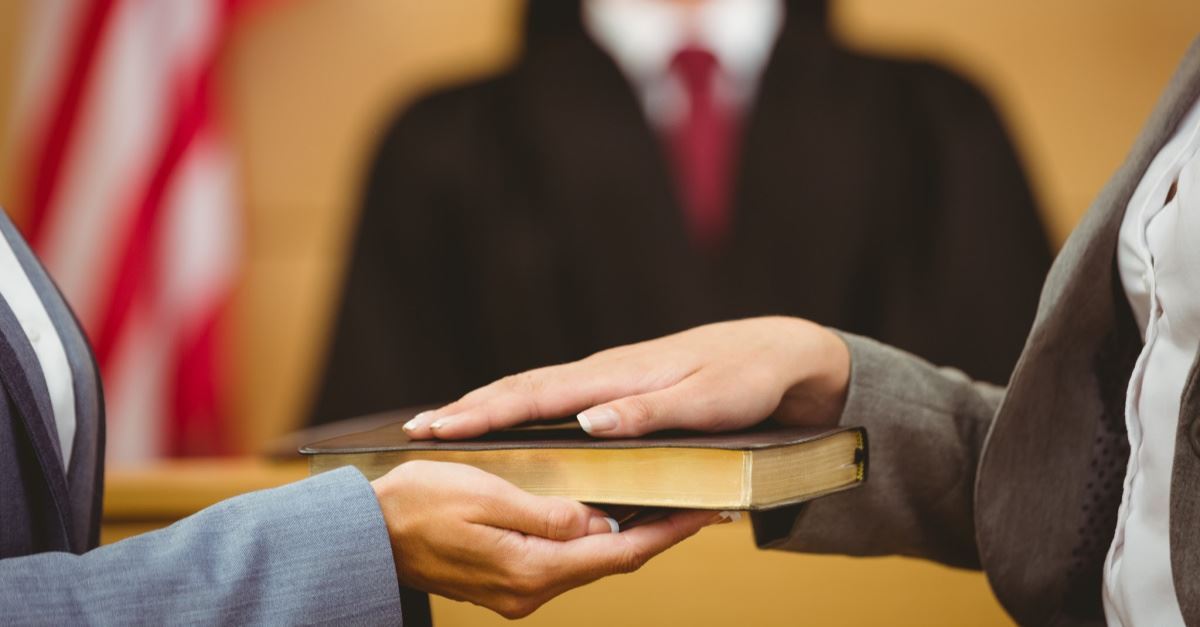 On Oaths and God

The attempt to remake our country into a secular wasteland continues unabated.

Even the U.S. House of Representatives has begun leaving God out when swearing in witnesses.

For example, a video of such an omission is beginning to make the rounds.

Graham Ledger, the host of “The Daily Ledger” on One America News Network, showed the video of this purposeful omission of God at a swearing in; and he commented: “So God is gone now. Poof. No more God in the people’s House. This is not about a religious test. This is about the founding of this republic. We are a country built on a core belief in God and Judeo-Christian values. Thus, the Declaration of Independence is now under de facto assault by this crew. One nation under God, divisible by one political party that seeks to attack liberty and justice for all.”

In the video, we see Democratic Congressman Steve Cohen from Tennessee, who is the chairman of this particular committee, swearing in guests. Cohen is perhaps best remembered as the congressman eating KFC on the Congressional floor in a publicity stunt recently.

Cohen asks some witnesses about to testify: “Do you swear or affirm under penalty of perjury that the testimony you’re about to give is true and correct, to the best of your knowledge, information, and belief?”

Congressman Michael Johnson (R, LA) politely interrupts with a “parliamentary inquiry.” He states: “I think we left out the phrase ‘so help me, God.’”

Cohen replies directly to Johnson, “We did.” Johnson asked if the witnesses could swear in again, but this time with the traditional phrase, “So help me God,” added. Chairman Cohen shakes his head and says, “No.” And he adds, “If they want to do it…but some of them don’t want to do it.”

Johnson states, “Well, it goes back to our founding history. It’s been part of our tradition for more than two centuries, and I don’t know that we should abandon it now.” Cohen looks at Johnson, and his face seems to communicate, “What planet is this guy from?”

Johnson adds, “Could I ask the witnesses if they would choose to use the phrase?” Then Congressman Jerome Nadler (D-NY), shuts this discussion down, saying, “We do not have religious tests for office or for anything else, and we should let it go at that.”

I once interviewed Michael Johnson for Christian television. As an attorney, he specialized in religious liberty. He told me, “Can the government acknowledge the role of God in human affairs? Now we know that the founders have always done that since the beginning – the founding of the nation.” So, the answer is yes.

Johnson also added, “Americans intuitively have an appreciation for absolute truth and justice. We were programmed that way by our Creator, and that’s what the founders acknowledged from the very beginning… The enemies of the faith would have us remove all vestiges of Christianity, all vestiges of the God of the Bible from the public square; and that’s not what the Constitution says, and that’s not what we’re required to do.”

Another Republican Congressperson weighs in on this issue. Liz Cheney from Wyoming says: “It is incredible, but not surprising, that the Democrats would try to remove God from committee proceedings in one of their first acts in the majority... They really have become the party of Karl Marx.”

When my brother-in-law saw this clip, he responded: “If you think about it, our rights are inalienable because they are endowed by our Creator. If we no longer believe in a Creator, how soon will our rights no longer be inalienable?” Exactly. That is what’s at stake in this debate on a seemingly arcane subject.

The founders followed the classic tradition of swearing in on the Holy Bible and in the name of God. Why are oaths taken that way? Because they recognized that we are accountable to God who sees all and who will one day judge us all.

I remember in seminary, one of my professors said, “It’s not what we (professors) expect that matters. It’s what we inspect.” Inspection means accountability. It means we have to do the assignments, which they will then inspect.

In his Farewell Address, George Washington said, “Let it simply be asked: Where is the security for property, for reputation, for life, if the sense of religious obligation desert the oaths which are the instruments of investigation in courts of justice?” Take God out of oaths, and they have no real meaning.

Thomas Jefferson asked, “Can the liberties of a nation be secure when we have removed a conviction that these liberties are the gift of God?”

Acknowledgment of God is another victim, it would seem, of today’s culture war. And with Him goes any assurance that the witness is telling the truth.