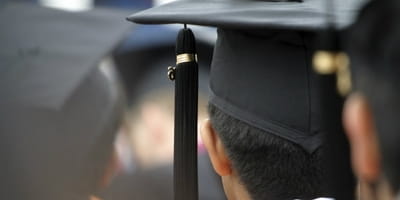 It’s an honor to stand here before you and share my first (and perhaps only) commencement address with the Class of 2014. More than a million and a half of you are walking the stage to receive your college degrees this this year, and you have my hearty congratulations. After all, only 30 percent of American adults have earned one, so you are, at least statistically, a member of the educated elite.

But please don’t let this go to your head. You’ve just begun the journey of lifetime learning, and the first step is to acknowledge that you don’t know as much as you think, and some of what you think just isn’t so. You’ve picked up a number of lies—let’s call them myths—about yourself and the contributions you will make in the world.

Let me explain. On January 28, 1986, NASA engineers and the seven astronauts aboard the Space Shuttle Challenger, ready for its 10th mission on Cape Canaveral’s Launch Pad 39B, assumed that the winter morning’s rare subfreezing temperatures posed no danger. The massive spacecraft lifted off at 11:38 a.m. All seemed well. But just 73 seconds later, the Challenger exploded, killing all aboard and showering the Atlantic with debris. One of the vessel’s simple O-rings had become brittle in the frigid, icy conditions and failed, allowing pressurized gas to escape from the right solid rocket booster.

Graduation myths are kind of like that O-ring. Sooner or later, they’ll fail you, because they can’t match reality. But don’t worry. I’m warning you in advance. Here are five key myths:

Myth No. 1: “The world is waiting for you.” Actually, it isn’t, and it will go on without you, long after you are gone. You are one of about 8 billion people on Planet Earth, not including the billions more who lived and died and whose names, for the most part, are forgotten. Most of us can recite the names of our parents and grandparents, but what about our great-grandparents? Our great-great-grandparents? Do you know any details from their stories? Probably not! It will be the same with you, my friends. In the classic poem, “Ozymandias,” Percy Bysshe Shelley writes of an ancient statue lying shattered in a lonely desert. On the pedestal are the words: “My name is Ozymandias, king of kings: Look on my works, ye Mighty, and despair!” Shelley concludes:

“Nothing beside remains. Round the decay Of that colossal wreck, boundless and bare The lone and level sands stretch far away.”

But though the world isn’t waiting for us and very few of us will be remembered, our lives still can have great meaning. As Mother Teresa once said, “Not all of us can do great things. But we can do small things with great love.” She also said, “If you can't feed a hundred people, feed just one.”

Myth No. 2: “Follow your dreams.” Another way of stating this myth is, “Do what you love.” Of course, that’s a fine sentiment, when it’s possible. I hope all of you have chosen fields of study and careers that will tap your abilities, gifts, and passions. Some of us are privileged to have this opportunity. About a century ago the great Scottish sprinter Eric Liddell confessed that when he ran, he felt “God’s pleasure.” That, my friends, is doing what you love.

But not too many years later, Liddell followed his dream into China as a missionary. He felt God’s pleasure there, too. Yet Japanese occupiers eventually threw him into a concentration camp, where he died, still young, his promise seemingly cut short. Yet Liddell’s impact remains in the lives he touched. Our dreams don’t always turn out the way we expect. May I suggest that you be open to following Something bigger than your dreams, and be ready to change your plans?

Myth No. 3: “You are what you do.” A variant in our money-obsessed culture is, “You are what you earn.” I remember a bumper sticker that first appeared in the go-go 1980s: “He who dies with the most toys wins.” (Today it would probably be, “He or she….”) It was usually plastered on a really nice vehicle. An up-to-date example of this sentiment might be the Cadillac commercial where the rich guy by his private poolside asks, “Why do we work so hard? For stuff?” For Cadillac, the answer is yes.

For a while, this myth may satisfy, assuming you can find a good job in this economy and pay off your school debts, but only for a while. What happens when, not if, we become injured or disabled or otherwise unable to do the job or make the money? From where do our identity and significance come then? Actor Philip Seymour Hoffman seemingly “had it all”: fame, fortune, and critical acclaim. Yet he died alone in his New York apartment, a needle in his arm. If work and money could satisfy, Hoffman would not have turned to heroin. Honest work is both good and necessary, but it doesn’t define us.

Myth No. 4: “Sex is the ultimate individual right.” Our culture has made sexual activity, a wonderful gift when enjoyed in marriage, the ultimate sacrament, and no one is to be turned away. The consequences of this new sexual ethic are dismissed. Abortion is no longer “a sad, even tragic choice.” Now we celebrate it with YouTube videos. Marriage is strictly optional. The fact that women inordinately bear the scars of this new “freedom” is ignored. Age-old notions such as marriage being between a man and a woman are dismissed as discriminatory and repressive. People are to be “free to love” whomever they desire. Those who disagree, even out of religious conviction, are called bigots, their careers fair targets for the thought police. Children are viewed as property, equally happy with a mom and a dad, two moms, two dads, or just one parent. We can even design them now. Fathers, however, are optional—though all the research says otherwise.

The breakdown of the family—seen in rising divorce rates, rising illegitimacy rates, and falling marriage rates—is clear evidence this myth doesn’t work. Author George Gilder notes, “Women control not the economy of the marketplace but the economy of eros: the life force in our society and our lives. What happens in the inner realm of women finally shapes what happens on our social surfaces, determining the level of happiness, energy, creativity, morality, and solidarity in the nation. These values are primary in any society. When they deteriorate, all the king’s horses and all the king’s men cannot put them back together again.”

Myth No. 5: “Religion is strictly optional.” Many young people today believe that religion is purely subjective and is often an impediment to a happy and fulfilling life. Yet all the studies report that those with an active religious faith are happier and feel more fulfilled than their non-religious counterparts. They even have better (married) sex lives. So leave the door open to Something bigger than yourself. You may discover an emerging longing for more as you go through life. Even the agnostic sociologist Charles Murray, in his later years, now admits that "there are ways of knowing that transcend intellectual understanding. They exhibit in their own personae a kind of wisdom that goes beyond just having intelligence and good judgment.” Look for them.

There are many more myths I’d like to expose for you so that your dreams don’t explode like blackened wreckage in the Atlantic, but I’m trying to avoid one that is common to public speakers: “The audience is hanging on your every word”! It is time for me to step down, and for you to step up, into this grand adventure called life. May your awareness of these five graduation myths keep you from stumbling on the way.

Thank you, and God bless.

Stan Guthrie, a Christianity Today editor at large, is author of All That Jesus Asks: How His Questions Can Teach and Transform Us, Missions in the Third Millennium: 21 Key Trends for the 21st Century, and A Concise Guide to Bible Prophecy: 60 Predictions Everyone Should Know, as well as coauthor of The Sacrament of Evangelism. His next book, God's Story in 66 Verses: Understand the Entire Bible by Focusing on Just One Verse in Each Book, is scheduled to be released in January 2015. Stan blogs at http://www.stanguthrie.com.