How Many Americans Believe Trump Is Anointed by God? 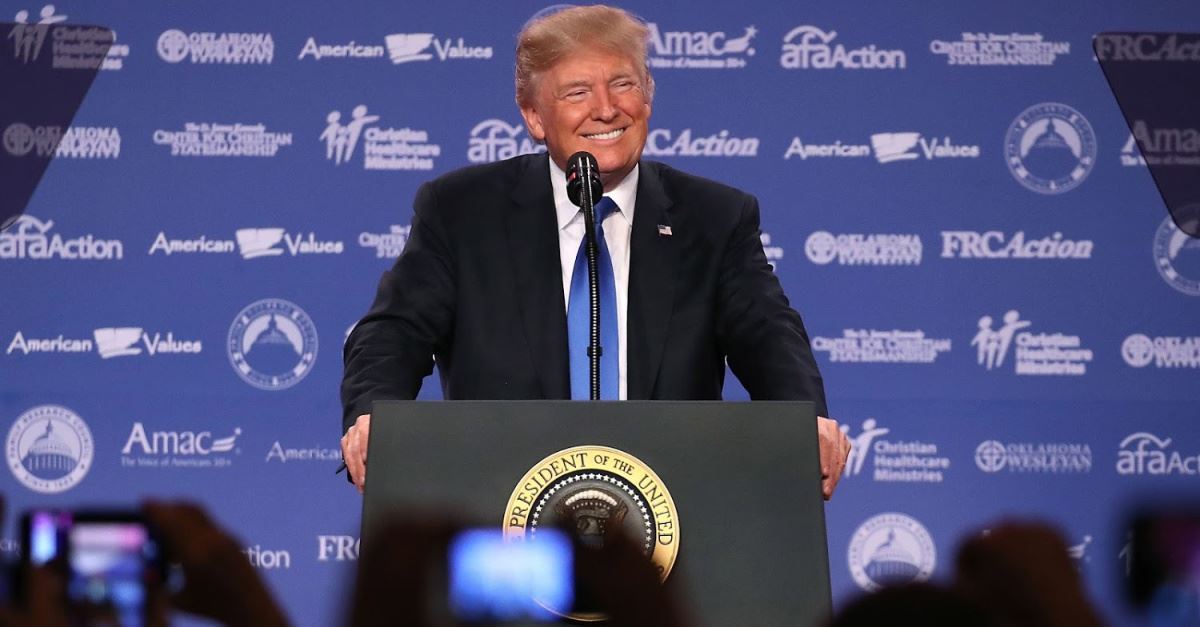 How Many Americans Believe Trump Is Anointed by God?

(RNS) — Over the weekend, Rick Perry, the U.S. secretary of energy, became the latest highly placed evangelical Christian to claim that President Trump is the “chosen one.”

“I said you were,” Perry said in a clip from an interview shown on Fox News’ “Fox and Friends,” relating a recent conversation with Trump about an August press briefing in which the president said, “I am the chosen one.”

“If you are a believing Christian, you understand God’s plan for the people who rule and judge over us on this planet and our government,” Perry explained. The energy secretary said he had given the president a memo listing the kings of Israel, all of them ordained by God in the Bible — none of whom, Perry pointed out, “were perfect.”

Perry seemed to be making a general point about some Christians’ understanding of God’s role in history. (A Fox reporter made clear that Perry thinks the same of President Obama.) But others have gone further. Not long ago, Paula White, the Pentecostal pastor who was recently named to head the White House’s faith outreach office, said she couldn’t refuse a request to serve from the president. “To say no to President Trump would be saying no to God, and I won’t do that.”

The Rev. Franklin Graham has made similar allusions, saying, “I think God was behind the last election,” as has former U.S. Representative Michele Bachmann. Wayne Allyn Root, a conservative author, radio host and conspiracy theorist, has called Trump the “King of Israel” and “the second coming of God.”

Another variation holds that Trump was not one of them (i.e., an evangelical) but was still an instrument anointed by God for some purpose, as was King Cyrus, a Persian emperor the Bible says was anointed to free the Jews.

On “Fox and Friends,” host Peter Hegseth said this perception of Trump is hardly restricted to conservative Christian leaders. “Going across country talking to supporters of this president, they feel precisely the same way Rick Perry does.”

Is this view of Trump as anointed by God common among Protestants? We put a survey into the field in May of 2019 that assessed the opinions of just over 1,000 Protestant Christians. We asked two questions regarding the anointing of presidents by God.

Slightly more white evangelicals (29%) agreed that Trump was anointed by God, but among white Pentecostals, like Paula White, that figure shot up to 53%.

Views of the Bible also affect how Americans responded. Among those who consider the Bible inspired by God, just 11% believe Trump was anointed, while those who believe the Bible to be the literal word of God are more than three times as likely to think so.

But the results also reveal an inconsistency among white Protestants. Just 12% of that sample agreed that all presidents are anointed by God, though it increased to 18% among white evangelicals and 30% among white Pentecostals. Calling Trump the anointed and not Barack Obama puts some in treacherous theological waters, of course, since the key difference is partisanship.

In the same way, belief in Trump’s anointing is very closely tied to support of his presidency. We asked white Protestants to score their feelings toward the president on a scale on which 100 is warm/positive and 0 is cold/negative. Forty percent of people who rated Trump at 100 said he was anointed by God. But just 10% of people who gave Trump the highest rating think all presidents are anointed by God.

At this embattled point in his presidency, suffice it to say, support for Trump is heavily overlaid with theological covering. This brings up the obvious question: Will white evangelicals remain with Trump to the bitter end?

At this point, the social, partisan, institutional and elite forces maintaining these theological ties would seem to prevent much slippage in support for Trump. There is, however, a theological out.

King Saul was anointed by the prophet Samuel. But while Samuel was away, Saul took it upon himself to bless his own decisions. Upon his return, Samuel said to Saul, “You have done foolishly. You have not kept the commandment of the Lord your God, which He commanded you … now your kingdom shall not continue. The Lord has sought for Himself a man after His own heart.”

Will evangelicals call out Saul?