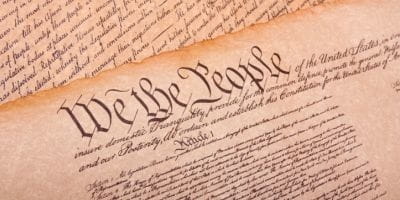 (WNS) -- Guns and abortion. One is an enumerated, constitutional right, and the other is not. The Second Amendment guarantees the right of the people of the United States to keep and bear arms. It’s not a government-given right; it’s a natural right — the right to defend yourself, your family, and your freedom.

In rare circumstances, abortion might be necessary to preserve the mother’s life. But there is no right to kill unborn babies in the U.S. Constitution. But 40 years ago next week the U.S. Supreme Court contended that abortion is an implied “right of privacy,” one that previously had lain hidden in our founding document.

I made the point on social media that conservatives should tie any talk of gun restrictions to abortion restrictions. You want to infringe on an enumerated right? Do the same for an implied right that results in the death of an unborn baby. You want to rid the country of guns? Then rid the country of abortion. Gun control? Then abortion control. Do you seek to reduce gun violence? Then reduce abortion violence.

Imagine the worldwide uproar if a conservative American president began issuing executive orders restricting the “right” of women to kill their unborn babies. If anti-gun types had their way, I’d be allowed to kill my baby for the sake of convenience (and for free if I can’t “afford” it), but I would not be allowed to shoot a thug who breaks into my house or assaults me on the street. I guess I could stab or stun him if I survive long enough. Or perhaps I can ask him if poverty or some childhood trauma is the root cause of his criminal activity.

People will always manage to get their hands on guns, just as women will always manage to kill babies they don’t want, regardless of any laws on the books against it. That’s what’s known as fallen human nature. As long as there is sin in the world, there will be a need to protect ourselves from those who seek to do us and our loved ones harm. Self-defense, even to the death, is a natural right. I oppose restrictions on the types of guns we can own and the amount of ammunition we can have. It’s only the beginning of a cascade of infringement that would hamstring those who seek to preserve themselves.

In the minds of some liberals, unborn children don’t count. Non-viable, developing little humans are defenseless against assault. Law-abiding citizens also will be defenseless if only criminals have guns. The Second Amendment right to keep and bear arms also protects us in the face of government tyranny.

For the record, tyranny — arbitrary or unrestrained exercise of power, despotic abuse of authority — cloaked in socialist sentiment is still tyranny. The Obama administration is considering 19 “executive actions” against our right to keep and bear arms. So-called assault weapons bans, universal background checks, and ammunition restrictions move us that much closer to a kingly denial of a guaranteed right. Meanwhile, how many unborn babies have died today?