Evangelical Alabamans: Don’t Vote for Moore, Even if His Christian Presuppositions are Correct 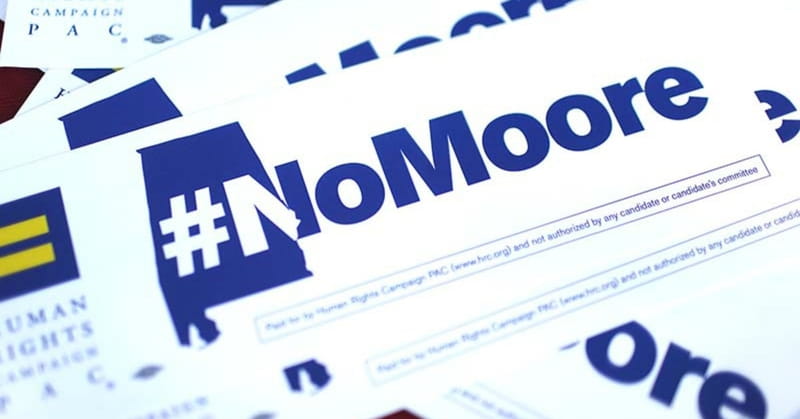 Evangelical Alabamans: Don’t Vote for Moore, Even if His Christian Presuppositions are Correct

My great-uncle was Cornelius van Til.

Uncle “Kees” (pronounced “Case”) was the Dutch-born Reformed Christian who originated presuppositional apologetics — the idea that what matters is whether your starting point is Christian belief. He taught it to evangelical thinker Francis Schaeffer when Schaeffer was his student at Westminster Seminary.

As RNS reporter Yonat Shimron wrote in her good but troubling article recently, it helps explain why so many evangelicals support Alabama senatorial candidate Roy Moore despite the allegations that he sexually assaulted underage girls.

Let me quickly give you the dime tour of presuppositional apologetics. In the ’40s and ’50s, when Uncle Kees was teaching at Westminster, Christian scholars were not considered legitimate members of the academy. Christians were those who believed in a spiritual world, and accepted far-fetched explanations that included beliefs in miracles and divine providence. Real scholars were rational and scientific, and believed only what they could see or logically prove.

Uncle Kees refused to be held to standards of empirical or rational proof. He took one step, and then a long journey behind the arguments against Christianity by asking what the presuppositions of the atheist were. He argued that those starting assumptions or presuppositions would preclude them from arriving at theism. If you start an argument about the existence of God with the belief that the only way of discovering that god is through the senses, or logic, you will end with that belief too. Uncle Kees then went on to show that the nonbeliever could not ultimately ground his arguments in his own presuppositions.

So far, so good. But, as the historian Molly Worthen points out in Shimron’s story, this presuppositional framework meant for philosophical debate has been extended into social and political thought.

So under this extended framework, when secular liberals say that the public square can be this neutral space, fair to all metaphysical beliefs, conservative evangelicals should see it as a lie. Because folded into it is a secular humanist worldview, a set of anti-Christian presuppositions that are now being foisted onto our public square. You, as conservative evangelicals, need to fight that, and you need to be savvy when they try to pull one over on you.

Evangelicals hold that anyone who holds Christian presuppositions is correct about their worldview, whereas secularists are wrong about theirs. To this point, Van Til would agree. But when these presuppositions are extrapolated to require specific social positions or voting mandates, I suspect Uncle Kees would be quite uneasy.

Here are two reasons why:

First, Moore supporters seem to believe that morality doesn’t matter, as long as you get the basic beliefs right. The Alabama judge is accused of child molestation, an ugly and grave moral failing. Yet, some support him because he has a correct foundational faith commitment regardless of character and even criminality.

To this I would argue that since character and criminality matter in every other part of life, why should it not count in politics? No doubt some will shrug and say, “no one’s perfect,” but “imperfections” are not the same as deep character flaws or crimes. I doubt that many Alabama Republicans would tolerate Roy Moore’s behavior in their churches; there, he might well be disciplined or perhaps even excommunicated.

Second, Moore supporters believe that since he ascribes to the right Christian presuppositions, he will support the right causes, especially the limitation of abortion rights. Here, I must grant that some will consider this enough to maintain their support for him. And if abortion is the only issue a voter is concerned about, their position is unassailable.

I am convinced however, that anyone who holds the presuppositions of the Christian faith cannot be concerned with only one issue, no matter how serious that issue is. Jesus himself was concerned about many things in his society: the poor, the orphans, the widows, unjust rulers, Sabbath laws, money, etc. This being the case, a Christian voter should support a candidate whose positions were aligned with his faith across the board, not just on one issue.

The basic error of those who support Moore because of his Christian presuppositions is the idea that the proper starting point will lead to the proper end. It is as if to say that anyone who starts their journey from Chicago will end up in Milwaukee. Clearly, not. One could well end up in Gary, Ind., or Joliet Ill., or even Butte, Mont. In fact, Christians who hold to the same tenets of faith do differ widely on a broad array of policies, some of which oppose others.

So, please, evangelical Alabamans, do not think that Roy Moore’s Christian presuppositions make him a good candidate.

Kent Van Til is a lecturer in religion at Hope College in Holland, Mich. The views expressed in this opinion piece do not necessarily reflect those of Religion News Service.

Photo: Bumper stickers saying "#NoMoore" sit on a table during a protest of Republican Senate candidate Roy Moore, Tuesday, Nov. 28, 2017, in Montgomery, Ala.