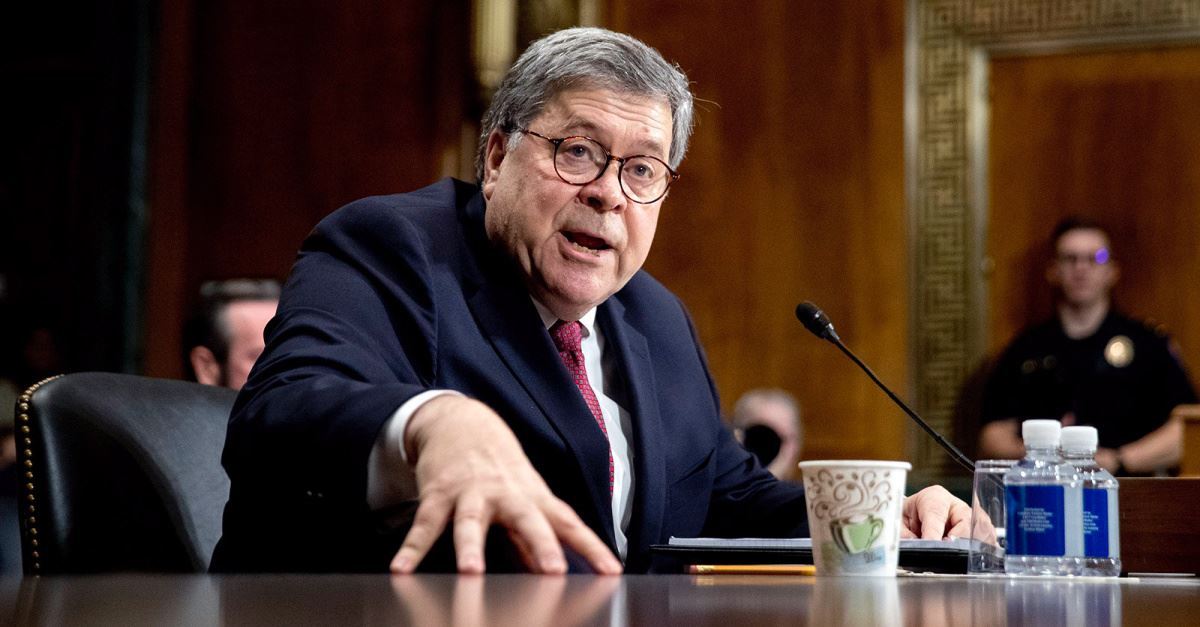 (RNS) — U.S. Attorney General William Barr is, by all accounts, a very committed Catholic. He’s a Knight of Columbus and served for several years as a member of its Supreme Board. He served on the board of the Catholic Information Center in Washington, D.C. until 2017 and serves on the board of the New York Archdiocese’s Inner-City Scholarship Fund. He reportedly donates $50,000 of his own money to pay for Catholic education for needy students each year.

His wife goes to Bible study regularly (and now, one presumes, somewhat awkwardly) with the wife of Robert Mueller.

Barr’s Catholicism is so well known that it came up in his confirmation hearing for attorney general when Louisiana Sen. John Kennedy, chastising Democrats who had made an issue of a judicial nominee’s Catholic associations, rhetorically asked if Barr’s religion should disqualify him for the job. (Barr said no.)

But Barr himself has long been criticized by secular groups for mixing church and state, particularly for his declaration that “society’s moral culture is based on God’s law,” in a speech to a Catholic group in 1992.

The worry that Barr might impose his private religious views on federal matters has apparently been overblown, at least judging from his decision this week to reinstate the federal death penalty.

Since at least 2005, when they issued their statement, “A Culture of Life and the Penalty of Death,” America’s Catholic bishops have condemned the death penalty as inconsistent with the pro-life teaching of the Catholic Church.

The federal government has not used the death penalty in nearly 20 years, making it hard for Barr to claim that his decision is demanded by law. No one is forcing him to make the change, in other words. It appears to be his specific, individual choice alone.

As one might imagine, the powers that be in the Catholic Church are not happy. Speaking for the United States Conference of Catholic Bishops, Bishop Frank Dewane said, “I am deeply concerned by the announcement by the United States Justice Department that it will once again turn, after many years, to the death penalty as a form of punishment, and urge instead that these Federal officials be moved by God’s love, which is stronger than death, and abandon the announced plans for executions.”

The USCCB is on very strong ground. The Catechism of the Catholic Church teaches that the “dignity of the person is not lost even after the commission of very serious crimes” and notes that “more effective systems of detention have been developed, which ensure the due protection of citizens but, at the same time, do not definitively deprive the guilty of the possibility of redemption.”

The only moral possibility for the death penalty comes from, as St. John Paul II put it, a situation where it is the only way to “defend society.” But in 1995, the Holy Father noted that “such cases are very rare, if not practically non-existent” given the capacities of most penal systems. Today’s U.S. supermax federal prisons, it hardly needs saying, fall into the “practically non-existent” category.

Given Catholic teaching, what Barr has done by instituting the death penalty at the federal level in the United States is manifestly and gravely sinful. He is freely and publicly instituting an inadmissible punishment that directly attacks the inherent dignity of the human person. A very serious sin, indeed.

As always with moral questions of state, Barr’s decision raises the question, on the one hand, of how the church should respond. In other contexts, bishops have asked public figures who persevere in grave attacks against the dignity of the human person to refrain from seeking Holy Communion. A decade ago, then-Archbishop Raymond Burke of St. Louis said that then-presidential candidate John Kerry should refrain from the Eucharist until he repented of his support for abortion rights.

Does Barr’s order fall into this category? That is ultimately up to his local ordinary bishop — in this case, as Barr is a native of Virginia, Bishop Michael Burbidge of the diocese of Arlington. One hopes he will ask to sit down with Barr and respectfully insist on his faithfulness to the teaching of the church.

If Barr obstinately refuses to live out his Catholic faith in his very public position, his bishop would be justified in asking him to refuse to present himself for communion until he confessed this sin and began to repair the serious disruption to the moral order. It’s important to note that this would not be a punishment. Instead it’s an invitation and motivation to do what is necessary to return to full communion with Christ and his Church.

There is also the question of what Barr’s responsibility is to his country. It may be that Barr believes he is duty bound by his office to impose the death penalty. In his announcement, he said, “Congress has expressly authorized the death penalty through legislation adopted by the people’s representatives in both houses of Congress and signed by the President … The Justice Department upholds the rule of law — and we owe it to the victims and their families to carry forward the sentence imposed by our justice system.”

For a long time, as on the abortion issue, politicians have claimed that their personal principles should not override their duty to the public. But the thinking in this regard is evolving. A 1998 law review article by Amy Coney Barrett, now a federal appellate judge, and John Garvey, now president of the Catholic University of America, argued that “judges cannot — nor should they try to — align our legal system with the Church’s moral teaching whenever the two diverge. They should, however, conform their own behavior to the Church’s standard.”

With regard to the death penalty, this meant Catholic judges recusing themselves in many and perhaps most situations.

If Barr truly believes his position as attorney general requires him to seek an inadmissible punishment as a matter of law, then his own words loom large as to what should come next.

At his confirmation hearing, he said that if his Catholicism demanded he do something inconsistent with serving in the government, Barr insisted he wouldn’t impose the Catholic view on others. Before doing that, he said rather dramatically, “I would resign my office.”