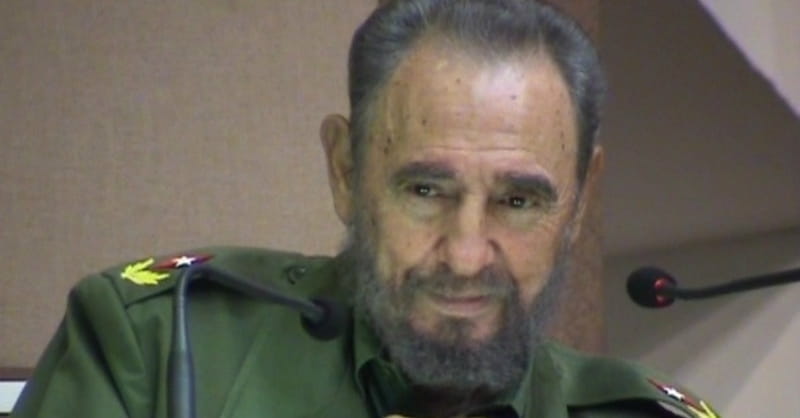 Editor’s note: This article first appeared at The American Spectator.

Fidel Castro is dead. To say those words is so strange. I’ve never known a moment when he wasn’t alive.

Castro came to power seven years before I was born, and I’m almost 50. I’ve been lecturing on the man every fall semester for 20 years, spending two or three weeks on him, his ideology, and the beautiful country he destroyed. It’s ironic that the day he died I finished two long chapters on him for a book manuscript, and a family friend (whose mother escaped Cuba) visiting for Thanksgiving just happened to ask how much longer I thought the 90-year-old despot might continue to live. The answer, it turned out, was a mere few hours more.

What to say in a few hundred words about a man like Fidel Castro at his death? Where to start? Where to end?

I think the answer is easy: The focus on Castro at his death must be just that: Castro and death. First, there’s the death he was responsible for since seizing Cuba in January 1959, and then, second, there are the incalculable millions more who would have died—not just in Cuba but in America and worldwide—had he gotten his way in October 1962.

So, for starters how many people were killed by Fidel and his communist dystopia?

Unfortunately, no one truly knows, akin to how no one knows how many poor souls he tossed into his jails, from political dissidents to priests to homosexuals. Fidel’s prison-state has never permitted human-rights observers, reminiscent of how he never permitted the elections he repeatedly promised in the 1950s. That said, many sources have tried to pin down numbers and have generated some common estimates:

“The Black Book of Communism,” the seminal Harvard University Press work, which specialized in trying to get accurate data on the enormous volume of deaths produced by communist tyrants, states that in the 1960s alone, when Fidel and his brother Raul (Cuba’s current leader) established their complete control, with the help of their murdering buddy Che Guevara, an estimated 30,000 people were arrested in Cuba for political reasons and 7,000 to 10,000 were believed to have been executed. Even then, that was merely the start.

From the late 1950s to the late 1990s, it’s estimated that Castro killed between 15,000 to 18,000 people, whether victims of long-term imprisonment or outright execution by bullets.

That is a lot of people for a small island. And it isn’t all.

Cuba is a surreal island of no boats, where boats are banned—because people with boats flee. Thus, untold numbers of citizens have attempted the treacherous nearly 100-mile swim to Florida in shark-infested waters. An estimated 100,000 have risked the journey. Of those, perhaps as many as 30,000 to 40,000 died from drowning. As they bob for breath, the Castro government sends military helicopters to drop large bags of sand on them from high above.

Yes, actually drop sandbags on them.

So, Fidel Castro is responsible for a lot of death.

But here, too, these numbers do not capture the level of Fidel’s brutal madness. Consider the actual millions he badly wanted to kill, especially here in America.

If Fidel Castro had his way in October 1962, the United States would have been leveled by atomic bombs and so would little Cuba, which would’ve ceased to exist. The fact is that Fidel recommended to Nikita Khrushchev that Cuba and the USSR together launch an all-out nuclear attack upon the United States, literally igniting Armageddon.

This is no secret. Castro admitted it. In an open forum discussing the Cuban Missile Crisis 30 years later, Castro told Robert McNamara, JFK’s secretary of defense: “Bob, I did recommend they [the nuclear missiles] were to be used.”

In total, said McNamara, there were 162 Soviet missiles on the island. The firing of those missiles alone would have led to (according to McNamara) at least 80 million dead Americans, which would have been half the population, plus added tens of millions of casualties.

That, however, is a conservative estimate, given that 162 missiles was far the sum total that would have been subsequently launched. The United States in turn would have launched on Cuba, and also on the USSR. President Kennedy made that commitment clear in his nationally televised speech on October 22, 1962: “It shall be the policy of this nation to regard any nuclear missile launched from Cuba against any nation in the Western Hemisphere as an attack by the Soviet Union on the United States, requiring a full retaliatory response upon the Soviet Union.” In response, of course, the Soviets would have automatically launched on America from Soviet soil. Even then, the fireworks would just be starting: Under the terms of their NATO and Warsaw Pact charters, the territories of Western and Eastern Europe would also erupt.

Once the smoke cleared, hundreds of millions to possibly over a billion people could have perished, with Western civilization in its death throes. If Fidel Castro had gotten his way, he would have precipitated the greatest slaughter in human history. (Che Guevara also wanted to launch the nukes.)

The Soviets were horrified. Their ambassador to Cuba, Alexander Alekseyev, was so stunned at what Castro told him that he stood frozen, speechless, crushed. Without waiting for an answer from the numb ambassador, Castro started writing his feelings on paper, which Alekseyev saw as a kind of “last testament, a farewell.”

Fidel was ready to go—go up in a giant mushroom cloud for Marxism. As McNamara learned, this was Fidel’s big chance to die as a “martyr” for Marxism-Leninism. He was ready to “pull the temple down on his head.”

A shocked Nikita Khrushchev realized he was dealing with madmen. Khrushchev’s son Sergei, in his three-volume biography of his father, said that the Soviet general secretary huddled with top officials in the “code room” of the Foreign Ministry late on a Sunday night and repeatedly ordered, “Remove them, and as quickly as possible.”

Khrushchev urged Andrei Gromyko to instantly get in touch with Washington in order “to save the world from those pushing us toward war.”

As for Fidel, he was “furious” with Khrushchev. “Castro was mortally offended,” recorded Sergei. “He had not managed to engage in a fight with the Americans. He had made up his mind to die a hero, and to have it end that way.” He had been ready to “die beautifully,” as one Soviet official put it. Denied his glorious opportunity, he now considered Khrushchev “a traitor.”

Thankfully, the world averted nuclear war, through the leadership of Khrushchev and Kennedy, and no thanks to bloodthirsty lunatics like Fidel Castro and Che Guevara, who were ready to blow up the world in the name of their Marxist-Leninist nightmare.

This, alas, was Fidel Castro. And for the record (and not surprisingly), not a word of it is found in the awful press release by President Barack Obama acknowledging Castro’s death, a statement that Marco Rubio rightly called “pathetic,” with “no mention of [the] thousands he killed & imprisoned.”