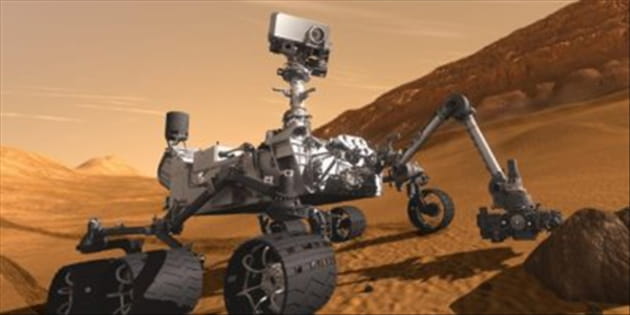 After eight and a half months, 352 million miles, and $2.5 billion dollars, Curiosity Rover landed on Mars accompanied by widespread congratulations and jubilation.

Can we join in? Should Christians support and celebrate the mars exploration program? More importantly, does God?

Curiosity has certainly given us more reason to worship God. The pictures are astounding in what they reveal of our Creator’s high-definition creation. Clearly, Mars was neither an accident nor an afterthought. It was deliberately conceived, designed, produced and carefully placed in its orbit by a wise and powerful God. If you want to be awed, consider that the Valles Marineris rift system on Mars is 10 times longer, five times deeper and 20 times wider than the Grand Canyon!

Truly, the heavens declare God’s glory and the sky proclaims His handwork (Psalms 19:1). And it’s not just Mars that evokes worship, it’s also the technology and the human brains that invented it that make us worship the God who made such brains, materials, forces, and laws to enable such an accomplishment to take place. We lift our hands and faces skywards, just as the NASA scientists did, but we look beyond a red planet and a robot to see the God behind it all.

We might also argue that supporting NASA is a way of loving our neighbors. “What, our Martian neighbors?” No, I’m referring to the numerous spin-off benefits that the space program’s research has brought to the human race: ultrasound, microprocessors, cell phones, medical treatments, Teflon (and 1500 others according to NASA). It is estimated that for every dollar spent on the space program, the U.S. economy receives about $8 of economic benefit.

Rejoicing With Those Who Rejoice

It was impossible not to be carried along by the exuberant celebrations of the normally sober NASA scientists when Curiosity landed after those “seven minutes of terror.” But before those seven minutes went multiple hours, weeks, months and years of planning, experimenting, deciding, designing, building, trial and error. If you’ve read anything of NASA’s history, you’ll have some idea of the huge sacrifice of time, mind, emotion, and even of health that goes into such achievements. It’s wonderful to see so many accomplish so much in their careers and we rejoice with them.

But apart from the national pride — and the nation certainly needs a “good news” story at the moment — there’s also the huge inspiration for individuals. Surely, someone somewhere (maybe many people in many places) saw the success of this courageous frontier-pushing innovation, and said, “Wow! If they can do that, then I’m going to pursue my dream too, I’m going to keep trying, I’m going to keep experimenting, I’m going to risk failure for the benefit of my family and my generation.”

Now I don’t want to put a dampener on the party, but let me gingerly raise the question: “Does space exploration have a divine mandate?” Or, at least, are we sure God does not forbid it?

There have always been Christians involved in space exploration, seeing their calling as part of God’s command to fill and rule His creation (Genesis 1:28). Some astronauts have even become Christians or had their faith deepened by their experience of space exploration.

However, other Christians have pointed out that the command to fill and rule is confined to the earth. Psalms 115:16 says that while God has given the earth to man, the heavens are the Lord's. Therefore, it is argued, that for man to attempt space exploration is to invade God's territory in Satanic or Babel-like pride (Isaiah 14:12).

Space exploration supporters usually respond by asking opponents if they've ever used an airplane or a satellite-produced weather forecast! Also, in Psalms 24:1 we are told that earth is the Lord's, and yet we are commanded to fill and rule it. The Lord's ownership of the heavens, then, does not exclude human exploration and subjugation of space.

So, let’s ask NASA: “Why Curiosity and Mars?” NASA replies: “Curiosity was designed to assess whether Mars ever had an environment able to support small life forms called microbes. In other words, its mission is to determine the planet's 'habitability.’”

And that’s where Christian worries begin. A large part of this mission is driven by evolutionists’ desire to prove that life, especially intelligent life, exists (or existed) on another planet. Such a discovery would be used to argue against the Bible’s emphasis on the uniqueness of the earth and the Bible’s account of creation.

That’s not to say that even if every NASA scientist had this motive, it would invalidate the program. God has even used badly motivated preachers to advance His kingdom. However, we should certainly be extremely cautious about blindly accepting the scientists’ interpretation of Curiosity’s data, when they are being driven by the presupposition (or, at least, the prejudice or desire) that life is or was on Mars.

Instead of proudly hoping to prove God wrong, it would be wonderful to see Curiosity’s data and pictures awing the greatest minds in the world and making them sing: “O Lord, our Lord, How excellent is your name in all the earth, Who have set your glory above the heavens! … When I consider your heavens, the work of your fingers, the moon and the stars, which you have ordained, What is man that you are mindful of him, And the son of man that you visit him?” (Psalms 8:1).

Christian, use the awesome Mars mission to deepen your wonder at the even more awesome mission of Jesus Christ to save lost sinners like us. May Curiosity lead us to Christ.

David Murray is professor of Old Testament and Practical Theology at Puritan Reformed Theological Seminary. He blogs at headhearthand and you can follow him on Twitter @davidpmurray.