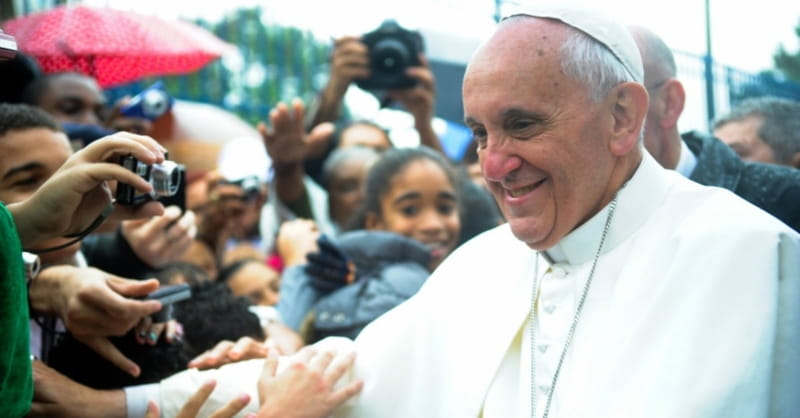 While papal visits to the United States are increasingly common, what is uncommon is to see political-ideological battle lines drawn around a pope. The tendency this time is especially acute among liberals, who eagerly frame Francis as one of them—a categorization Francis has resisted. “I’m sure that I haven’t said anything more than what’s written in the social doctrine of the Church,” he said as his plane approached U.S. soil.

To some degree, liberals are certainly justified in linking Pope Francis to many of their concerns—climate change, wealth redistribution, poverty. And even many conservatives seem to concede this pope to the political left. In truth, however, both sides lack a full picture. To illustrate the point, I’ll focus on the subject area that brings Pope Francis here to America to begin with: a major international Catholic Church synod on family and marriage.

Though Francis is absolutely forgiving and charitable and merciful, including to homosexuals, when it comes to marriage and family, this pope has been unflinchingly orthodox in support of historic Church teaching. Some of his language has been even stronger than his predecessors. The extent to which that is true is at times shocking. Here are just a few examples:

Last January, as nations from Ireland to America looked to redefine marriage, Francis gravely warned of the “forms of ideological colonization which are out to destroy the family” and “redefine the very institution of marriage.” Echoing his predecessor, he warned of the forces of “relativism” that would alter family, marriage, and “threaten” society and humanity.

Shortly before that, in November, he insisted that all “children have a right to grow up in a family with a father and a mother.” This followed a vocal statement after the previous synod on the family in Rome, where Francis asserted: “What they are proposing is not marriage, it is an association, but it is not marriage! It is necessary to say things very clearly and we must say this!”

He has always been very clear in saying this. When he was a cardinal in Argentina, he declared same-sex marriage a diabolical effort of “the Father of Lies” (i.e., the devil). This was July 2010, and Cardinal Joseph Bergoglio blasted a bill to legalize same-sex marriage and gay adoption in Argentina. He said: “Let us not be naive: this is not simply a political struggle, but it is an attempt to destroy God’s plan. It is not just a bill (a mere instrument) but a ‘move’ of the father of lies who seeks to confuse and deceive the children of God.” He added ominously: “At stake is the identity and survival of the family: father, mother and children. At stake are the lives of many children who will be discriminated against in advance, and deprived of their human development given by a father and a mother and willed by God.”

Obviously, liberals will find this extremely troubling. And yet, that’s nothing compared to Francis’ condemnation of “so-called gender ideology,” which would scandalize liberals. “Gender ideology is demonic!” Francis shouted at one interviewer. He has compared gender theory to “the educational policies of Hitler.”

Here, too, Francis sees this as another threat to the family. In this, Francis has taken an activist role, serving as the spiritual inspiration for a gigantic June 20 demonstration at St. John Lateran, the official church of his Rome diocese. Its purpose was to halt the introduction of gender theory into Italian public schools. This massive “Family Day” rally was a reflection of Pope Francis’ Year of the Family, and it came only four days after the pope’s environmental encyclical, Laudato Si. They were marching not against global warming but gender ideology.

This is a mere snapshot of Francis’ statements. He has done almost two dozen general audiences on the family. Tellingly, right before leaving Rome for the synod on the family in Philadelphia, he again affirmed the “image of the family—as God wills it, made up of one man and one woman,” which, he said, “is deformed through powerful contrary projects supported by ideological colonizations.”

Alas, what I’ve laid out here on Pope Francis and marriage likewise could be done for the cause of unborn children. His forceful denunciations of the “throwaway culture” of abortion are equally emphatic, as is his belief in forgiveness for those who repent of abortion.

What does this mean? It means you shouldn’t cherry-pick this pope. You can’t grab this or that statement that fits your personal political-ideological preferences and think you have the full picture.

This pope is neither liberal nor conservative. The Francis picture has many shades.

Editor’s note: A version of this article first appeared at thehill.com