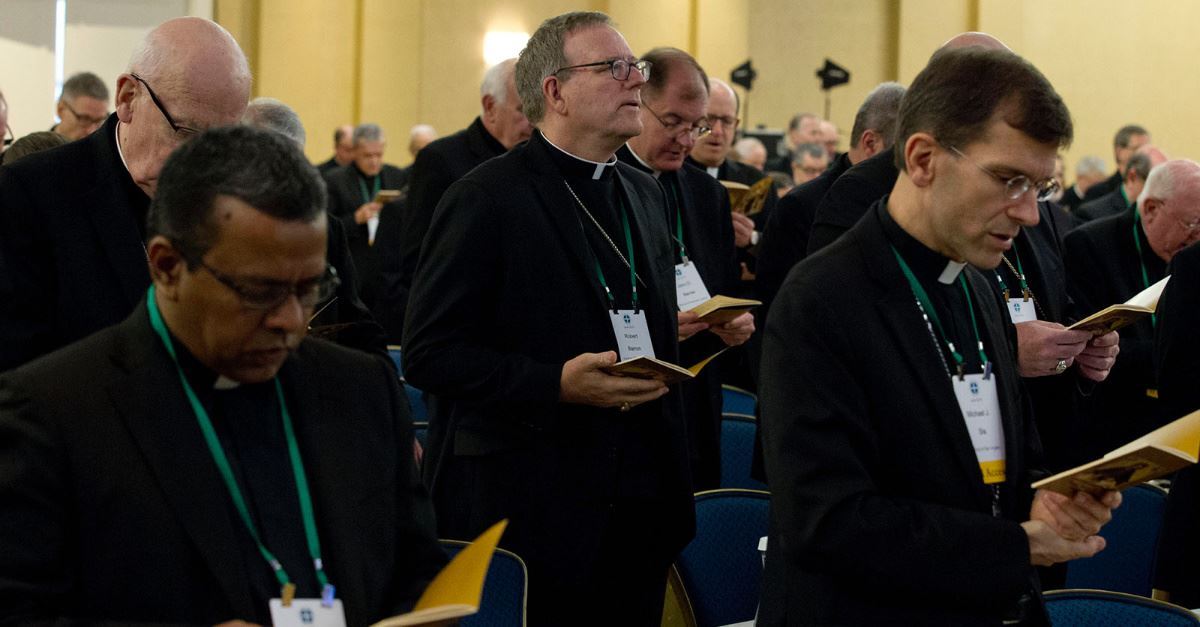 BALTIMORE (RNS) — Finally, 17 years to the month after a major clergy sex scandal forced them to crack down on priests who abuse children, the Catholic bishops of the United States have set up a system designed — at least in theory — to hold their own feet to the fire if they cover up abuse.

The set of policies is “a work in progress,” as Cardinal Daniel DiNardo, president of the U.S. Conference of Catholic Bishops, put it. Even they came only after years of anger and activism from reformers, and after a series of revelations had sparked a level of fury among the faithful not seen since 2002 and The Boston Globe’s eye-popping “Spotlight” investigation.

But this week’s reform package was easy compared with what comes next — namely, changing the culture of clerical privilege that everyone from the pope to victims’ groups says is at the heart of the abuse crisis. This attitude of entitlement among the higher clergy has created the conditions in which concealing misdeeds didn’t require a grand conspiracy, as has been charged. It was simply a natural reflex.

Francis took aim at that culture of entitlement again on Thursday (June 13), telling some 100 Vatican nuncios — archbishops who serve as the pope’s diplomatic emissaries around the world — that they should at all costs avoid “the danger of gifts.”

“The Bible defines as wicked the man who accepts underhand gifts, to deviate the course of justice,” Francis told them in a stern sermon on humility and obedience. “Refuse gifts that are too costly and often useless, or give them to charity, and remember that receiving a costly gift never justifies its use.”

His words could have been speaking directly to the Americans meeting in Baltimore.

On the eve of this week’s meeting, as news broke that a bishop in West Virginia had sent large cash gifts to more than 100 other clergymen, writing personal checks that were then reimbursed through sleight-of-hand accounting, all of it funded by multimillion-dollar annual revenues from a century-old gift to his diocese of a Texas oil field.

Not only that, but the news report showed that Baltimore Archbishop William Lori, tasked by the Vatican with investigating the bishop, Michael Bransfield, had edited out his own name and the names of the other senior bishops and cardinals who has been recipients of Bransfield’s largesse. When this concealment came to light, Lori quickly apologized, admitted his mistake and said he would return the $7,500 he had received from Bransfield. Other top churchmen followed suit.

The problem is that if Bransfield is a particularly egregious example of the culture of rewarding friends and cultivating allies with gifts and cash — and living far better than most of one’s flock — he is not a total outlier.

Particularly in the large, historic and relatively wealthy dioceses of the East Coast, such Old World customs are fairly common, and while not necessarily corrupt, they show how fungible and opaque church finances remain. They also demonstrate a pastoral disconnect that leaves so many stunned — as well as creating the kind of environment of entitlement that leads to other abuses.

Consider that this week’s meeting in Baltimore was originally scheduled to take place at the luxurious Ritz-Carlton Hotel in Santa Barbara, Calif., a $600-a-night resort overlooking the Pacific Ocean, owned until recently by Catholic multimillionaire Tim Busch.

It revealed much about how the bishops view themselves to see them book a place more suited to a corporate CEOs’ getaway than a “retreat” for pastors living humbly in service to their flock. Only when the 22 bishops of California threatened not to come to the Ritz-Carlton did USCCB leadership change the venue, saving the church from responding to the Bransfield story even as the prelates lounged around a pricey Pacific Coast spa.

Changing this culture has been a priority for Pope Francis. He has compared changing the church’s entrenched culture to “cleaning the Sphinx with a toothbrush.” The pope himself has chosen to live in the Vatican guest residence rather than the grand apostolic palace and to eat at the Vatican cafeteria with other workers. He views such daily humility as inextricably linked to the kind of pastoral and inclusive “church for the poor” that he envisions.

Francis has said that Catholics will forgive their pastors most weaknesses except for two: “an attachment to money … and the mistreatment of people, which is something the people of God cannot digest.”

There are signs that Francis’ clerical power wash is having some effect. He has begun appointing bishops from outside the usual clerical career track, promoting priests who have worked as pastors and in charity organizations, rather than the traditional network of canon lawyers and chancery officials.

Before Francis named him to head the Diocese of Pensacola-Tallahassee in Florida in 2017, for example, Bishop Bill Wack, a 51-year-old Holy Cross priest, worked mainly as a parish pastor and for six years running a house for the homeless and poor in Phoenix.

“We need to live simply, and people need to know that we are living simply,” Wack told a Facebook Live audience Tuesday evening from Baltimore.

That’s not just good PR. It’s what the gospel demands, it’s what the flock wants, and it creates the kind of church culture that would make whatever accountability policies the bishops have passed a backstop rather than a front-line defense.

It will take longer than the 82-year-old Francis has to complete the culture change. It will surely take another papacy like his to make the shift permanent. The question is, when — or if — the bishops finally get the issue of their power right, who will still be in the pews?