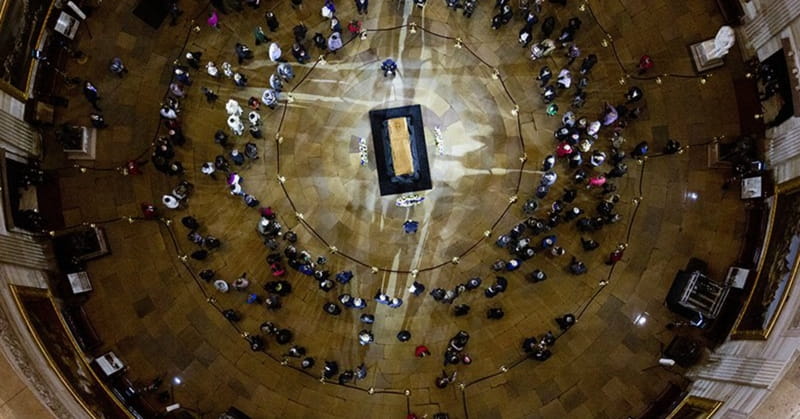 In the wake of Billy Graham’s death, several major media outlets ran columns suggesting that the evangelist was the “last nonpartisan evangelical,” comparing him favorably with his decidedly partisan son Franklin.

Graham père, it was affirmed, got along with every president since Truman, while Graham fils is a rabid Trumpist, lined up with the likes of Jerry Falwell Jr., Robert Jeffress and the rest of Donald Trump’s evangelical curia.

Funeral orations are thus being offered, with more than a dash of schadenfreude, over the corpse of white American evangelicalism as a moral community hopelessly compromised by its allegiance to an immoral president.

And yet, the report of this death is, as was Mark Twain’s, an exaggeration.

Yes, Falwell Jr., Liberty University’s president, is happily in the pocket of the president. But evangelicalism’s most prestigious institution of higher learning, Wheaton College in suburban Chicago, is led by the Oxford-doctorate-holding Philip Ryken. Partisan? Not in the slightest.

Nor are the presidents of similar leading institutions: Calvin College in Michigan, Gordon College in Massachusetts, Westmont College in California and so on. Baylor University, the Baptist school aiming to rival Notre Dame, is led by a president who has her hands full defusing various ethical scandals and guiding Baylor into a brighter future. She has no time for political partisanship.

Yes, Al Mohler, president of Southern Baptist Theological Seminary, speaks out loudly and frequently on behalf of conservative values, yet even he is often circumspect about outright political partisanship. All the more politically reticent are the presidents of the other top 10 seminaries, all of them evangelical.

Yes, Jeffress, pastor of First Baptist Dallas, is quick to defend Trump in front of any microphone put before him. But the pastors of the largest 10 churches in the United States, all of them evangelical, are not. Why don’t you hear about them? Perhaps because they’re interested in pastoring, not politics, while most journalists are far more interested in the latter than the former.

Yes, Franklin Graham runs Samaritan’s Purse, one of the top half-dozen evangelical charities in America in 2016, according to Forbes. But the others are the Salvation Army, World Vision, Compassion, Cru (formerly Campus Crusade for Christ) and MAP International, none of them with any political partisanship at all.

White American evangelicalism’s leading periodical is the determinedly nonpartisan Christianity Today (founded by, of all people, Billy Graham). Its recent list of the best Christian books of the past year included precisely zero politically partisan books.

Yes, white American evangelicalism largely did support Trump over Hillary Clinton in the last election, and lots of us have been trying to understand that decision ever since. But what remains true is that most evangelical energies, hours, dollars and prayers do not go toward politics of any stripe, but toward churches, missions, schools and charities, both here and abroad.

Is Billy Graham the last nonpartisan evangelical? It might seem that way, sure, if you’re thinking inside the Beltway. If you look upward and outward at the rest of the country and the rest of evangelicalism, however, the landscape looks very different.

John G. Stackhouse Jr. is the Samuel J. Mikolaski Professor of Religious Studies at Crandall University in Moncton, Canada. His new book is “Why You’re Here: Ethics for the Real World” (Oxford). The views expressed in this commentary do not necessarily reflect those of Religion News Service.

Photo: Visitors pay their respects as the casket of Billy Graham lies in honor at the the U.S. Capitol Rotunda in Washington on Feb. 28, 2018. It's a rare honor for a private citizen to lie in honor at the Capitol.