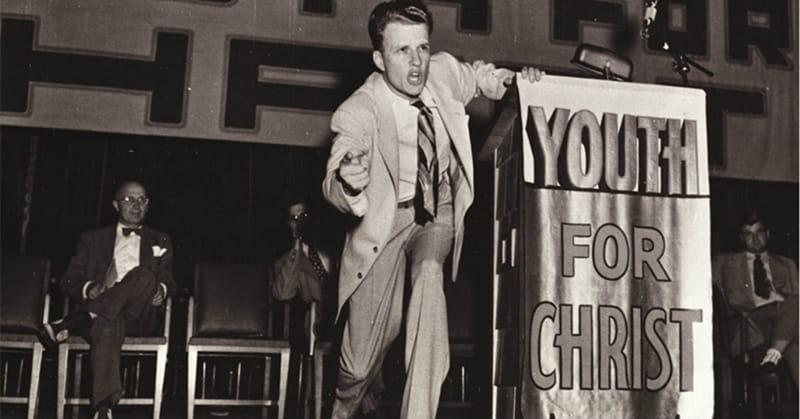 During the civil rights movement, Billy Graham said he was a preacher, not a prophet. And while he is remembered for speaking out against racism and segregation during his later revivals, some scholars argue that he gave white evangelicals a safe alternative to civil rights engagement.

The Rev. William E. Pannell of the Fuller Theological Seminary in Pasadena, Calif., said Graham’s message of personal salvation helped give African-Americans the perception that whatever he “was talking about, whatever his value or legacy may be, it was outside of the best interests or perceived interests of the black community.”

Randal Jelks, African-American studies professor at the University of Kansas, said that although the Rev. Martin Luther King Jr. prayed at Graham’s 1957 New York City crusade, the evangelist was “very much out of touch” with the struggles of people on the margins while connected to the powers that be.

“Billy Graham was seeking fame and respectability and to make white evangelicals respectable,” said Jelks. He said Graham’s connections with the Republican Party would trouble King “and a whole generation of black people, because these are the very parties that were led by the Reagans and the Goldwaters, who were undermining the claims of civil rights.”

Ohio State University sociology professor Korie Edwards described Graham’s failures on civil rights as a “lost opportunity.” She said that while people, regardless of racial and ethnic background, appreciated his television ministry, he didn’t use his influence with American presidents to further social justice.

“I wouldn’t say that that would be a major part of his legacy,” she said.

But Graham was “greatly impacted” by what he saw when he took a helicopter tour of Los Angeles in 1963 after the Watts riots, recalled the Rev. Ralph Bell, an early African-American evangelist with the Billy Graham Evangelistic Association, who accompanied him on the ride.

Bell saw “spiritual growth” in Graham regarding civil rights, he said, and that growth was evident in his stipulation that crusades in Birmingham, Ala., and elsewhere in the 1960s South be integrated.

“Mr. Graham was a good man, a man of integrity, and didn’t have a bit of prejudice in him. But I think when he came face-to-face with the national impact of the race relations in this country, it sharpened his perspective and his determination to do whatever he could to make an impact on the civil rights movement and on race relations as a whole,” Bell added.

“I think later on, as he grew and matured and came to a deep understanding of the Scriptures, that he had a strong awareness that we’re all created equal in God’s sight,” he said.

In 2012, Graham appeared to take a political turn to the right, when he urged Americans to vote for biblical values and came out in support of a constitutional ban on same-sex marriage in North Carolina.

At the time, Steve Knight, a former employee of the BGEA communications division, questioned whether the statements were really Graham’s, or those of his politically outspoken son Franklin Graham.

Knight, now an organizer at Repairers of the Breach, said Graham had worked closely with ghostwriters for many years.

But even on civil rights, Pannell said in an interview at the time, Graham “gave leadership to an emerging evangelicalism which has always been really lily white, and with the theme of revivalism … tied to a kind of nationalism.”

He described Graham-led revivalism as revivalism not for God’s sake, but for the sake of the nation, which is going “down the drain” unless it repents.

“It’s not until the civil rights movement really, when the nation itself began to say, ‘Hey, wait a minute. Democracy really hasn’t happened and can’t happen if we’ve got a significant number of our people who can’t even vote.’ … But that voice didn’t come from evangelicalism,” said Pannell.

One positive aspect of Graham’s legacy that Pannell said has been overlooked is his urban ministry legacy and his role in “kicking off” the Youth for Christ ministry, where Graham was the first full-time evangelist. Graham then took over a Youth for Christ radio show in Chicago, preached at the organization’s first youth rally in the city and became its first vice president. Pannell said Graham doesn’t often get significant credit for building what he described as “a very important evangelical ministry to the cities.”

Asked what Graham’s ultimate legacy will be, Bell said that “because of his integrity and his strong preaching of the gospel, wherever he was, whether he was in the presence of the president or whether he was with ordinary native people in their huts, he was the same.”

“He was the same person publicly as he was privately, and he was genuine, and because of that I think people trusted him on every level of society and he became like the chaplain to the nation,” Bell added.

Photo: Billy Graham begins his public ministry with the Youth for Christ organization in 1945.