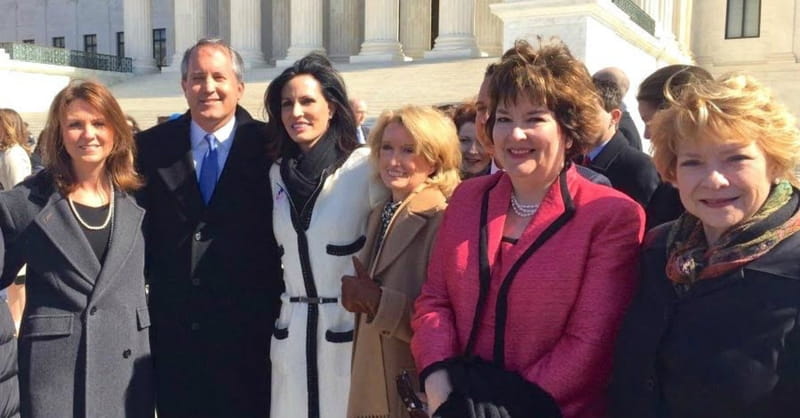 One day this month, most likely a Monday, the U.S. Supreme Court will hand down its decision in the case Whole Woman’s Health v. Hellerstedt. The case centers on a Texas law defining minimum health and safety standards for abortion practices, which abortion providers have sued to halt.

A remarkable Texas woman, the author of state law HB 2, stands at the center of the controversy. For years working in a family-owned tech company with her husband Robert, Jodie Laubenberg transitioned for some years to a larger role: raising their young children. Then in 2002, when two pro-choice politicians were the only candidates in her district, she ran for state representative and won. Yet her biggest battle came a decade later.

To share her story firsthand, Texas State Rep. Laubenberg recently joined a conference call with Texas Loves Life—a coalition committed to pray for life to be upheld in this case. With Matt Lockett of Bound4LIFE moderating, Laubenberg reveals events behind-the-scenes in this Texas-sized clash… and how concern for women guides her pro-life leadership.

Matt Lockett: State Rep. Jodie Laubenberg represents House District 89 in Texas, and she joins us now. Representative Laubenberg, many of us have been caught up in the drama around this pro-life law without knowing how it all began. What led you to run for public office and become a Texas state representative?

Jodie Laubenberg: What got me involved in politics was actually the life issue. Back when Pat Robertson was first calling Christians to step out, I had always looked at myself as a supporter of those running for office—particularly pro-life candidates—as opposed to considering running myself.

When a seat opened up in my state district, two people ran who I believed were not necessarily pro-life. I tried to find someone, but no one wanted to run and—long story short—I decided to run, at least to give the voters a choice. My opponents first tried to belittle my conservative views, particularly my pro-life beliefs.

But I wanted to go bold and stand firm for the value of every life. I did not back away from it; I did not run from my positions. Noticing my increased support, my opponents tried to take up a pro-life position late in their campaigns—but Texans saw through that. I have been in the State Legislature since 2003.

Matt Lockett: How is it that you came to be the lead sponsor of Texas law HB 2?

Jodie Laubenberg: For years, we were trickling out little pro-life bills here and there. The previous legislative session, I had filed a ban on abortions after a baby’s 20th week of development—known as the Pain-Capable Unborn Child Protection Act at the federal level. It went nowhere in Texas at first.

Then in 2013, I filed it again and the session ended without it being passed. In Texas, we have short legislative sessions that are intense—it’s very hard to get bills passed.

Texas Governor Rick Perry called a special legislative session. In our state, the legislature can only consider bills that are specified by the Governor during a special session, which lasts 30 days. Halfway through, the Governor added the life issue to the call.

Again, my bill was the restriction on abortions after 20 weeks—the 20-week ban. Three of my colleagues in the Texas House and Senate had filed additional pro-life bills: ensuring RU-486 is used according to FDA guidelines; instituting ambulatory surgical center standards for abortion clinics; and requiring abortion providers to have admitting privileges at a hospital within 30 miles.

We decided to combine all four of these stand-alone pro-life bills into one omnibus bill. The Governor said, “If we’re going to do this, let’s go bold.” We have to give Governor Perry a lot of credit.

Any Texas legislator could have filed the omnibus bill, but the life issue is a passion of mine and I believed I would hold strong. So I filed the HB 2 omnibus bill. I never dreamed of the drama that would take place. I was a little reticent because I knew the pro-abortion forces could be aggressive and very mean-spirited; it was going to be rough.

I just felt like God had placed me there, having prepared me in the 10 years that I had been a legislator. It took a long time to get to the point where I knew what their arguments against pro-life policies would be. Thankfully, we had a large pro-life coalition from the beginning—including Democratic members who voted for HB 2.

Matt Lockett: By going bold as Texas did, you galvanized the entire pro-life movement because you showed what was possible. What has been the impact of this pro-life law in Texas?

Jodie Laubenberg: This law has had significant impact in Texas. My friend Carol Everett, who leads The Heidi Group network of pregnancy care centers, has firsthand knowledge and their study shows more than 40,000 lives have been saved thus far.

What we’re seeing is more women are going into the pregnancy care clinics for ultrasounds; it presents a great opportunity to reach out and help them.

This law has received so much media attention, resulting in two things. First, people are becoming more aware that there is a life in the womb—it really is a life! And second, people who examine this law in-depth realize that it really is about protecting women.

The pro-abortion side cannot deny it, as much as they try. It’s not just saving the baby, HB 2 is helping the mother who may be frightened and confused. However, if she does end up in an abortion clinic, it should be up to ambulatory surgical center standards. At the very minimum, she deserves that.

Matt Lockett: Because our mutual friend Carol Everett has been so involved from the beginning, she also joins us now. Carol, take us back to 2013—what did you experience at the Texas State Capitol in Austin?

Carol Everett: I remember the pro-abortion folks were decked out in orange. Jodie had on a blue sweater that day, and she urged the pro-life side to wear blue.

So it became this clash of two colors, seen in media across the nation. Jodie led the charge on this law with wisdom, class and compassion. I believe God worked through her in all she did.

Jodie Laubenberg: When we saw what Planned Parenthood was doing, those mean-spirited protests, it was Carol Everett who rallied the troops. I called her and said, ‘Carol, I’ve got to have support—I cannot be down there by myself.’ And Carol got folks there.

Carol Everett: I believe it was God who inspired all those pro-life people to come to the State Capitol. And Jodie, it impressed many people how you paced yourself.

None of us really knew what was coming; we didn’t know the threats she would face. But Jodie stood for 36 hours, while Wendy Davis stood for about 11 hours and was hailed all over the nation. But none of us were doing this for applause or fame.

Jodie Laubenberg: We still hear a lot about Wendy Davis standing for 11 hours filibustering this bill. Texas ultimately had to call two sessions to pass this pro-life law. Over the course of the two sessions, I stood for 36 hours debating—not reading things out of a notebook that staff prepared for me, as Wendy did.

I had prosecutors and everyone who hated the cause of life going after me, challenging me on every one of the provisions in the bill. By myself, I could not have done it. It was truly like the Holy Spirit just filled me at that moment. We read in the scriptures that, God will give you the answer at the time you need it—and here He did!

Matt Lockett: Since the law passed in 2013, abortion providers have sued to halt the Texas law from being enacted—and their case made it all the way up to our nation’s highest court.

Many people have been praying for this law at every stage in the lower courts and now at the U.S. Supreme Court. Since the eight justices heard oral arguments on March 2, what is your perspective on the outcome of this case?

Jodie Laubenberg: As you know, our state’s Solicitor General Scott Keller did an excellent job before the U.S. Supreme Court on behalf of HB 2. A lot of scenarios have been discussed, but there has been no indication about the Supreme Court’s decision according to my knowledge.

I was there in the courtroom, which was rather awesome. To sit there and see those eight justices deliberating over something that is the essence of who we are as a civilization—to decide what direction we’re going to go—it was amazing and sobering.

The arguments were intense. The pro-abortion leaning justices were very aggressive, hardly allowing our attorney to finish a sentence. While the other side’s attorney was ill-prepared, the Texas Solicitor General did very well. Even when the pro-abortion lawyer clearly did not have a clear grasp of the facts, she had Justices Kagan and Sotomayor come to her defense.

I have confidence that this decision is in God’s hands. We know He has been involved from the beginning.

Carol Everett: I agree with Jodie—our confidence is in what God is going to do at the Supreme Court. We saw something unbelievable happen with HB 2, a significant pro-life bill passed by bipartisan majority vote without amendment or change. That’s unheard of.

Matt Lockett: I am blown away by the grace you both walk in. This is a testimony of you both taking simple steps of obedience and watching God do what only He can do. You’ve shown a willingness to put yourself in the line of fire, so to speak.

Jodie Laubenberg: Sometimes God doesn’t show us exactly what we’ll encounter. If I had known what it would all look like, I may have turned away and run! But when you’re in the middle of it, God strengthens and provides.

Josh M. Shepherd serves in communications at Bound4LIFE International, a grassroots movement to pray for the ending of abortion, carry the spirit of adoption and believe for revival and reformation. He previously served on staff at The Heritage Foundation, Focus on the Family and in the U.S. Congress.