Happiness, or Having Children? 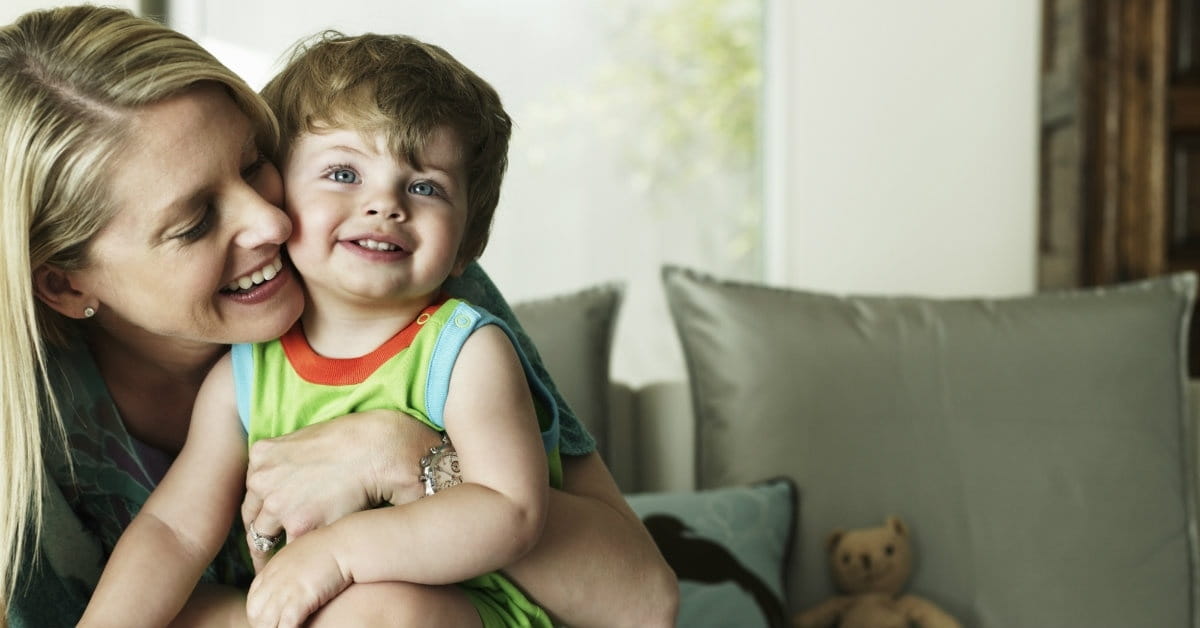 Happiness, or Having Children?

Make a list of what could happen to your life that would be worse than divorce.

Even worse than the death of a spouse.

But even if I gave myself a long time to reflect, I cannot even begin to imagine putting “having a baby” on the list. And as a father of four, that’s not theoretical.

Yet according to a new study published in the journal Demography, having a child is not just bad, but devastatingly bad. Yep, worse than divorce, unemployment or even the death of your partner.

Here’s how the study worked: take 2,016 childless Germans and then study them until at least two years after the birth of their first child. Then, get them to rate their “happiness” from 0 (completely dissatisfied) to 10 (completely satisfied) in response to the question, “How satisfied are you with your life, all things considered?”

Why is something so generically worded instantly tied to the existence of a child? Researchers Rachel Margolis and Mikko Myrskyla respond, “Although this measure does not capture respondents’ overall experience of having a child, it is preferable to direct questions about childbearing because it is considered taboo for new parents to say negative things about a new child.”

Apparently the study’s goal was to try and find out why most couples in developed countries, such as Germany, say they want two children, yet the birthrate remains 1.5 per woman. And has for 40 years. 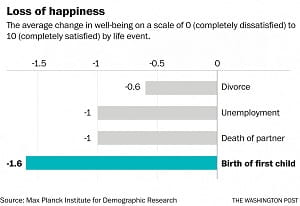 Having a baby proved to be so devastatingly horrific that plans for a second were scratched.

When asked what is so tough about having kids, the answers fell into three categories: the physical pain and nausea conflicted with the desire to work (and fathers were concerned about the medical issues of their partner), complications during the birth itself made them wonder whether to “go through it again,” and finally, "the continuous and intense nature of childrearing" was the biggest issue.

So what to make of this?

First, to ask people a generic happiness question that is not in specific reference to a new child, and then to tie their answer to their new child, is the worst type of “correlation.” The child may have had nothing to do with it, or at least not directly. A child will certainly bring many things to the surface – financial stress, pre-existing marital difficulties, in-law dynamics – but that is not the same as simply saying “children are a negative experience.”

Second, if you ask people what is tough about having a child, of course they are going to tell you issues related to the pregnancy and birth. There is nausea and conflict with work. There is pain in childbirth. But to say this is why they aren’t happy, or don’t want more kids, is proven false even by the study. In fact, the study found that the life satisfaction for most couples ticked up in the first year prior to birth. Translation: they viewed life more satisfactorily during pregnancy than before.

So what really is going on here?

I have an idea.

Anyone who has had a child knows that it brings about radical change, and the most radical aspect of all is the death to self. Nothing forces you to become more selfless than the primary care of a child. You lose freedom to do whatever you want, whenever you want to do it. You might have to alter your employment situation. There are additional monetary expenses.

And at no time is the “shock and awe” of these dynamics more in play than the first two years.

“How satisfied are you with your life, all things considered?”

So yes, it may “feel” worse than divorce, unemployment or even the death of a spouse.

That’s how much we value “self,” and how we have made “satisfaction” all about ourselves.

Yet it is only in dying to ourselves that we ever really come to life. When we choose to die to ourselves, prompted by love, a new dimension to living begins to aggressively take hold that changes us at the most foundational of levels.

Yes, it can be resisted and resented, but if embraced and pursued, it is the most beautiful, rewarding and fulfilling life that can be lived. In fact, the sheer joy of having children – not necessarily happiness, much less satisfaction, but joy – is unparalleled.

There are some terribly misguided reasons to have a child, such as to “save” a marriage. But the most misguided of all is for your own personal fulfillment or satisfaction.

Susan and I would be the first to go on record that if we had bypassed children, we would,

…have a bigger church,

…and lived a life of less joy, less fulfillment, less purpose, and much less love.

It’s been a good trade.

(And I haven’t even mentioned grandchildren!)

So let’s go back to the study’s question:

“How satisfied are you with your life, all things considered?”

It all depends on how you define the meaning of life.

Ariana Eunjung Cha, “It turns our parenthood is worse than divorce, unemployment – even the death of a partner,” The Washington Post, August 11, 2015, read online.