Why Did The New York Times Run an Anonymous Op-Ed? 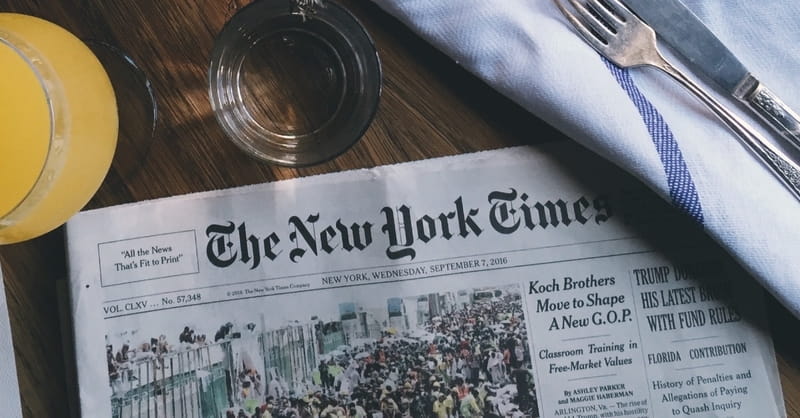 Why Did The New York Times Run an Anonymous Op-Ed?

I’ve never seen this much furor caused by an op-ed, much less one whose author we don’t know. But that’s partly the point.

The New York Times chose on Wednesday to publish an op-ed from what it called a “senior official” in the White House who makes extremely disparaging claims against President Trump. Speculation regarding the identity of the writer has escalated in the days since.

Some think Vice President Mike Pence is the writer. Secretary of State Mike Pompeo had to deny authorship. White House Press Secretary Sarah Huckabee Sanders called on the “coward” who wrote the piece to “do the right thing and resign.”

Many are focusing on the truth or falsity of the writer’s defamatory descriptions of the Trump White House. Others are working to identify the author. Here’s a question I’ve not seen debated: Why did the Times choose to publish the op-ed in the first place?

The Times editor who made the decision has said, “We felt it was a very strong piece written by someone who had something important to say and who’s speaking from a place of their own sense of personal ethics and conscience. That was our main focus.”

But it’s worth asking whether the liberal New York Times would have made the same decision if the op-ed had been written about Barack Obama when he was in the Oval Office. Or whether Fox News would have published last Wednesday’s op-ed, given the opportunity.

The danger of confirmation bias

According to one psychologist, “confirmation bias” occurs when we have formed a view and then “embrace information that confirms that view while ignoring, or rejecting, information that casts doubt on it.” Such bias is obvious every day in the media. We should not be surprised that liberal and conservative commentators are reacting according to their previous opinions of the president.

Our divided media reflects our divided nation. When Judge Kavanaugh’s Senate hearings began this week, 38 percent of Americans thought he should be confirmed to the Supreme Court, while 39 percent did not.

Of all the reasons we could offer for our divided culture, consider one: the fall of the Soviet Union.

Unified by our enemies

America was founded on a creed–“All men are created equal”–rather than for a specific ethnic or socioeconomic class. We were defined by what we were (an egalitarian democracy) and by what we were not (subjects of England).

Our fragile unity was shattered by the forces that led to the Civil War, a conflict that, according to acclaimed historian James McPherson, “forged a nation.” That nation was tested by wars with Mexico and Spain before winning two world wars. We were resolved to defeat our enemies, a commitment that focused our patriotism and strengthened our unity.

Our nation continued to be united by our enemies during the Cold War and the aftermath of 9/11. However, radical Islam is less a threat to our nation today and the Soviet Union is no more. Today, we are a country without a clear enemy.

No longer unified by external threats, many Americans are now committed to subsets of the culture. For some, loyalty to a political party means vociferous and unconditional opposition to the other party. Bipartisan cooperation seems a thing of the past, a commitment for which leaders like John McCain are often more criticized than praised.

Caricaturing and vilifying fellow Americans because we disagree with some of their beliefs is both popular and dangerous. Here are biblical steps toward unity tempered by grace.

One: Renew our personal commitment to biblical absolutes. The apostles were willing to die rather than cease preaching the gospel (Acts 4:18-20). Know what we believe and why we believe it.

Two: Build bridges rather than moats. Our purpose on earth is not to win arguments but to win souls. We are to defend biblical truth “with gentleness and respect” (1 Peter 3:15).

Three: Set an example by speaking the truth in love (Ephesians 4:15). God’s word is clear: “Let your speech always be gracious, seasoned with salt, so that you may know how you ought to answer each person” (Colossians 4:6). We should never say about people what we will not say to them (Matthew 18:15). If we reflect the spirit of Jesus, we are more likely to draw people to Jesus.

In 1783, after leading the American forces to victory, Gen. George Washington resigned his military commission. In a circular letter to the governors of the American states, he offered his “earnest prayer” for the new nation that God “would most graciously be pleased to dispose us all to do justice, to love mercy, and to demean ourselves with that charity, humility, and pacific temper of the mind, which were the characteristics of the Divine Author of our blessed religion; without a humble imitation of whose example, in these things, we can never hope to be a happy nation.”

What would the father of our country think of the country he helped create? What will you do today to help America be a “happy nation”?