Why Did Picture of Trump and the Pope Go Viral? 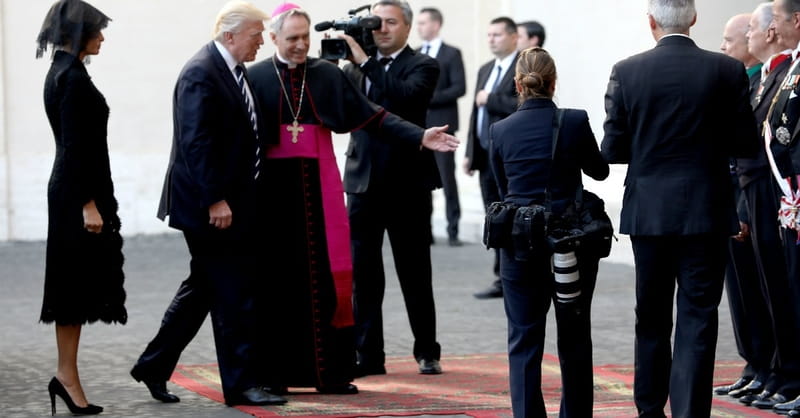 Why Did Picture of Trump and the Pope Go Viral?

It is the picture seen ’round the world.

Last Wednesday, President Trump, along with members of his family and political inner circle, shared a private audience in the Vatican with Pope Francis. A picture taken during their time together shows a smiling president next to a somber-faced pope.

The photo quickly went viral. When I did a Google search yesterday on “trump frowning pope photo,” 26,600,000 results came up.

Vox‘s response was typical: “It almost looks like a farce: Trump cheerily oblivious, Pope Francis looking for all the world like he’d rather be literally anywhere else but in that room with that man.” New York Times columnist Gail Collins linked to the Vox story and added that Pope Francis “looked as cheerful as if he was watching his car being towed away.” Late-night talk show hosts mocked the president as an avalanche of memes and caustic reports on the picture flooded the Internet.

However, the photographer who took the picture told Time magazine a different story.

Evan Vucci recalled: “The mood in the room, it didn’t seem somber. The pope was smiling. They were sort of talking. Nothing seemed unusual to me or out of the ordinary.” Other pictures from their meeting show the pope and the president smiling as they talked and exchanged gifts.

Scripture offers us a better way: we can criticize the president’s actions, but we should not demean his person.

God’s word calls us to speak truth to power. Nathan rebuked King David’s sinfulness (2 Samuel 12:7–12). The prophets consistently criticized the immoral actions of their leaders (cf. Amos 1–2). Jesus exposed the hypocritical acts of Israel’s religious authorities (Matthew 23). Mark Twain described “true patriotism” as “loyalty to the nation all the time, loyalty to the Government when it deserves it.”

However, God’s word also calls us to respect the office our leaders occupy. Nero, one of the most despicable rulers in history, was in power when Peter wrote his first epistle. Yet Jesus’ lead apostle exhorted his readers to “honor the emperor” (1 Peter 2:17). Note that Peter did not instruct them to “honor Nero” as a person but to “honor the emperor” as a position.

Demeaning our leaders as persons undermines the office they hold and the nation they serve. It leads to a downward spiral of vengeance whereby each political camp perpetually demonizes the other. By contrast, a basic principle of biblical ethics is to say about people only what you would say to them (cf. Matthew 18:15).

Yesterday, Facebook CEO Mark Zuckerberg delivered the commencement address to the Harvard Class of 2017. He closed with this Jewish prayer: “May the source of strength, who blessed the ones before us, help us find the courage to make our lives a blessing.”

Photo: US President Donald Trump and his wife First Lady Melania Trump are welcomed by the prefect of the papal household Georg Gaenswein as they arrive at the Apostolic Palace for an audience with Pope Francis on May 24, 2017 in Vatican City, Vatican. The president will return to Italy on Friday, attending the Group of 7 summit in Sicily. Trump will also visit American troops stationed in at a US air base in Sicily.