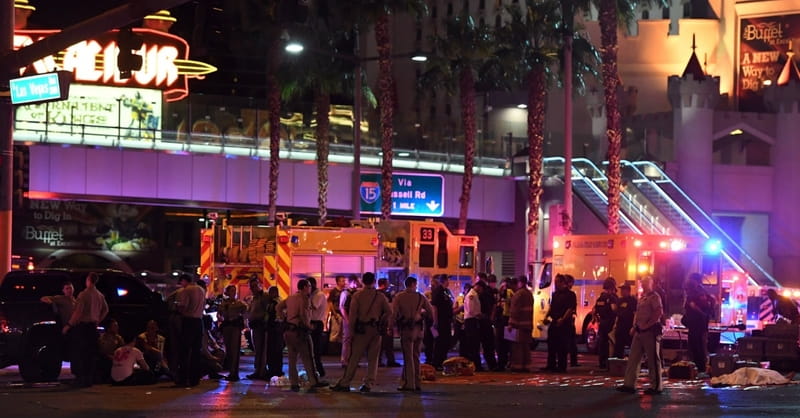 Sonny Melton was an emergency room nurse in Tennessee. He attended Sunday’s concert in Las Vegas with his wife, an orthopedic surgeon. When shots were fired, he protected her with his body. His wife later told reporters that he “saved my life and lost his.”

What are the people who survived the massacre feeling today?

Dr. Lane Ogden is a longtime friend and a psychologist with more than twenty-five years of experience. I asked him for his thoughts regarding those who survived the worst mass shooting in US history.

He described their feelings as “a sense of unreality, of disjointedness—sort of like waking up on another planet where one is not sure what rules pertain or what expectations can be trusted as accurate to manage the shifted environment.” They experienced a “cascade of fear, grief, confusion and anger” that continues today.

Tragedies forever change those who survive them: “Experiencing trauma permanently alters the landscape; it demands a reshuffling of perspective, a redefinition of what’s possible within the realm of a frightening new reality and a shifted, more thinly stretched deployment of coping mechanisms.”

Dr. Ogden also noted that you and I are survivors as well, whether we were at the Las Vegas concert or not. Such tragedies mark us as well: “The impact of traumas like this is cumulative with each reminder of our fragile mortality, combining with those previous to strip us (even from afar) of our sense of stability, control, and the thin illusion of real safety.”

My friend defined the problem I’m addressing today: the hopelessness that follows senseless violence. Country singer Kane Brown performed in Las Vegas hours before the attack. He tweeted a four-word reaction to the shooting: “This world is sick,” a sentiment many of us share today.

But someone responded: “The ‘world’ is not sick. One person was sick. One person does not represent the world at large.” That’s exactly right. Police officers shielded citizenswhile people turned their trucks into makeshift ambulances and military veterans treated wounds. One man transported a wounded victim by wheelbarrow.

Responding to such heroism, White House Press Secretary Sarah Huckabee Sanders stated, “The memory of those who displayed the ultimate act of love in the midst of an unimaginable act of hate will never fade.”

Now it is our turn. Rather than yielding to despair, we can find ways to help.

Intercede for those affected directly by this tragedy. Ask God to comfort them in the “fear, grief, confusion and anger” they are feeling. Ask him to raise up believers to minister to those in shock and pain.

If you’re in the Las Vegas area, you can donate blood that may save lives. We can donate money to organizations working to support the victims and their families. We can ask God to direct us to those we know who are personally affected by this tragedy.

There have been more than 270 mass shootings in the United States so far this year. The ultimate answer to violence is the Prince of Peace. Only his Spirit can transform broken sinners into loving servants.

The Las Vegas shooting reinforces the urgency of praying, serving, and sharing God’s love with everyone we can, whenever we can. Tomorrow is promised to no one.