The Worst Mass Shooting at Church in US History 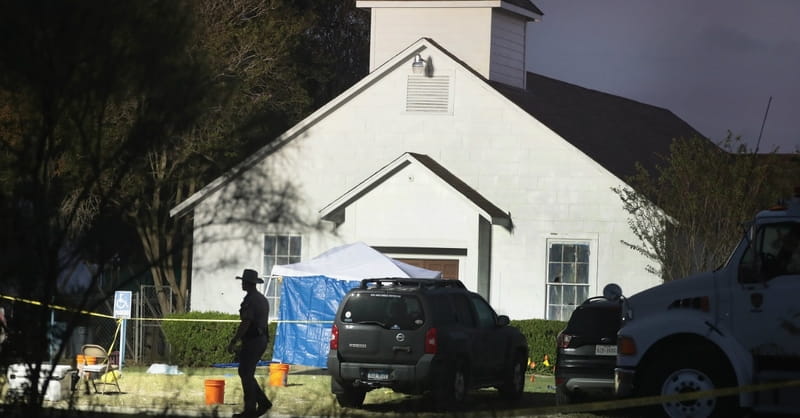 The Worst Mass Shooting at Church in US History

Yesterday was the International Day of Prayer for the Persecuted Church. While Christians were praying for persecuted believers around the world, a shooter walked into a Texas church service and opened fire. At least twenty-six people were killed and twenty more were injured.

Sutherland Springs, population 643, is in Wilson County, about thirty miles southeast of San Antonio. The First Baptist Church was holding morning worship services when a gunman identified as twenty-six-year-old Devin Patrick Kelley entered the church about 11:20 a.m. After attacking the congregation, he fled into neighboring Guadalupe County where he died.

The New York Times describes the horrific scene: “Families gathered in pews, clutching Bibles and praying to the Lord, were murdered in cold blood on the spot.” The victims ranged in age from five to seventy-two. Among the dead were several children, a pregnant woman, and the pastor’s teenage daughter.

It was the deadliest shooting in Texas state history.

Wilson County Commissioner Albert Gamez Jr. told CNN, “My heart is broken. We never think where it can happen, and it does happen. It doesn’t matter where you’re at. In a small community, real quiet and everything, and look at this.”

Since 2005, there have been numerous other church shootings, including the 2015 massacre of nine at a church in Charleston, South Carolina. By one calculation, 2015 saw 248 violent incidents on religious property.

We might think that churches would be the safest of locations. People meet to worship, study Scripture, and share Christian community. In no sense are they harming anyone by their attendance and activities.

But we are at greater risk than we may know.

Meeting times are posted and anyone is welcome. Most church buildings have multiple points of access. Few churches have security personnel or policies in place. Some congregations resist employing security guards, worrying that they will frighten children and distract from worship.

The reality of persecution

On one level, church attacks are a component of the larger escalation of violence in our country.  According to the Washington Post, there have been 132 mass shootings in America since 1966, killing 974 people. No populated places are immune, from malls to movie theaters to schools.

On another level, however, violence against churches are spiritual attacks. Scripture teaches that persecution is a basic fact of Christian life:

What should Christians do when facing violence?

First, pray for our enemies:

Jesus promised: “Blessed are those who are persecuted for righteousness’ sake, for theirs is the kingdom of heaven” (Matthew 5:10). In heaven, we will meet “the souls of those who had been slain for the word of God and for the witness they had borne” (Revelation 6:9).

Now twenty-six of our sisters and brothers have joined their number.

John Greenleaf Whittier: “The steps of faith fall on the seeming void, but find the rock beneath.” The less we can see the path, the more we must trust our Guide.

Photo: Law enforcement officials continue their investigation at Sutherland Springs Baptist Church as the sun begins to rise on November 6, 2017 in Sutherland Springs, Texas. Yesterday a gunman, Devin Patrick Kelly, killed 26 people at the church and wounded many more when he opened fire during a Sunday service.