‘The Hopes and Prayers of Liberty-Loving People Everywhere March with You’: A D-Day Reflection 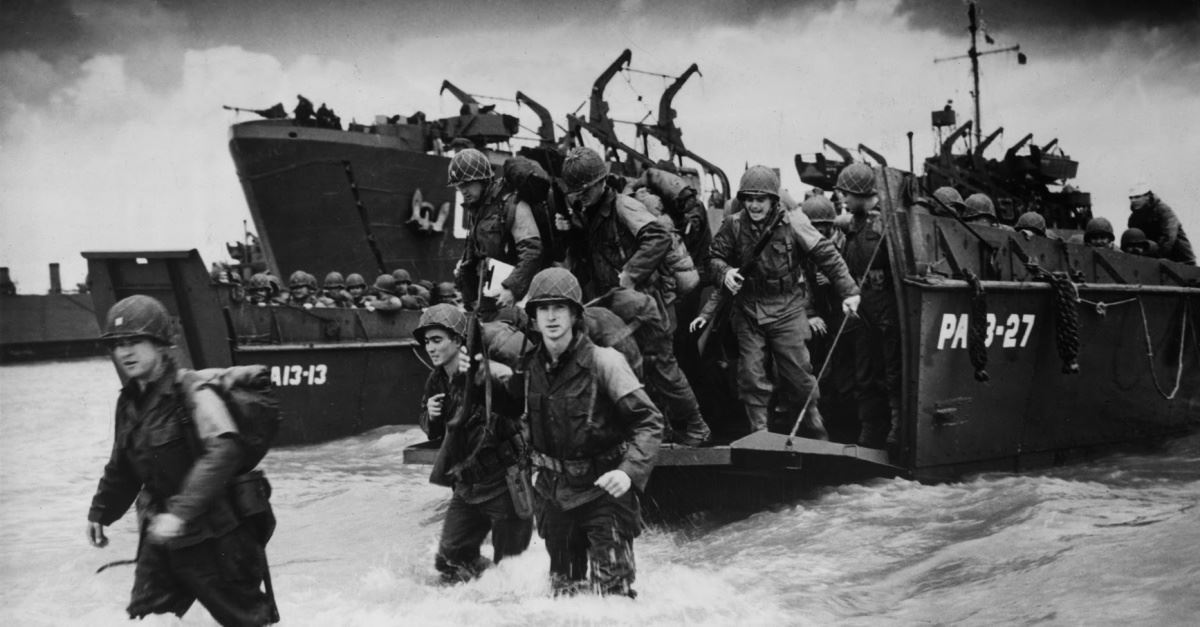 ‘The Hopes and Prayers of Liberty-Loving People Everywhere March with You’: A D-Day Reflection

“The noise was deafening. The black smoke and the acrid smell of cordite, which was coming from the battleships firing the big shells. They are the outstanding things in my memory coming from that day.”

When it was over, the Allied Forces had suffered nearly ten thousand casualties; 4,414 were confirmed dead. But a foothold against Nazi Germany had been established in Europe.

Normandy is a region in northern France. It was selected the year before as the location for an Allied invasion under General Dwight D. Eisenhower’s command. Code-named Operation Overlord, the invasion was preceded by a massive deception campaign.

Known as Operation Fortitude, this campaign involved a “dummy army” commanded by Lt. Gen. George Patton that pretended to target Calais, to the east of Normandy. German spy planes flying over southeast England reported the buildup of a massive invasion force, but the regiments of tanks and landing craft were mostly inflatable decoys.

Double agents and phony Allied radio traffic intended for the Germans confirmed the Calais strategy. The Allies also dropped hundreds of dummy paratroopers well inland of the eventual targets along the Normandy beaches.

As a result, Hitler was convinced that the actual invasion was merely a diversion. He was asleep when the invasion began; when he woke up, he refused initially to send reinforcements to Normandy.

An article every American should read

While the Allies made brilliant preparations for the invasion, D-Day was nonetheless horrific.

Imagine yourself on a flat-bottomed landing craft approaching Omaha Beach. German artillery shells destroy boats all around you. You finally make it to shore and jump into the water while carrying eighty pounds of gear. German snipers atop the high cliff then begin strafing your lines.

One American unit landing at Omaha lost 90 percent of its men.

“First Wave at Omaha Beach,” an article in the November 1960 issue of The Atlantic, tells the story in detail. It should be required reading for all Americans as we pay tribute to the indescribable courage and sacrifice of those who fought for our freedom.

I once spent a day at the National WWII Museum in New Orleans. While I focused primarily on the war in the South Pacific where my father served, I also spent time at the D-Day exhibits. I was astounded by the complexity of the largest amphibious assault in history and humbled by the stories of the soldiers who risked—and many of whom gave—their lives for us.

This morning, President Trump is at the American cemetery at Omaha Beach, where more than 9,380 American service members who were killed at D-Day and the following operations are buried. Yesterday, he joined fifteen other world leaders to commemorate the seventy-fifth anniversary of the invasion.

British Prime Minister Theresa May read from a letter written by Captain Norman Skinner of the Royal Army Service Corp to his wife and their daughters just days before he was killed during the D-Day landings. He wrote to them, “Although I would give anything to be back with you, I have not yet had any wish at all to back down from the job we have to do.

“I shall always be grateful to the powers above for having been able to be with you, to have been loved by you,” he told his wife. “I’m sure I will be with you again soon and for good. Give my fondest love to my Ann and my Janey.”

Our best response to sacrifice

In light of all these men did to secure our freedom, what can you and I do to serve this nation they loved?

These imperatives are familiar but no less urgent: Christians can intercede for our military and their families and pray daily for our leaders (1 Timothy 2:1–2). We can express our heartfelt gratitude to veterans for their sacrifice. We can become engaged in public service; I am convinced that God is calling more believers into political leadership than are answering his call.

We can be salt and light to our post-Christian culture (Matthew 5:13–16), seeking excellence as our platform for spiritual influence. And we can serve the cause of freedom for which so many died on this day by sharing the gospel of eternal freedom in Christ (John 8:36).

The more we remember the courage of those who died for us, the more we are inspired to pay any price to serve our Lord and our country.

“The eyes of the world are upon you.”

On the eve of the largest invasion in history, General Eisenhower told the Allied soldiers: “You are about to embark upon the Great Crusade, toward which we have striven these many months. The eyes of the world are upon you. The hopes and prayers of liberty-loving people everywhere march with you. In company with our brave Allies and brothers-in-arms on other Fronts, you will bring about the destruction of the German war machine, the elimination of Nazi tyranny over the oppressed peoples of Europe, and security for ourselves in a free world.”

And so they did.