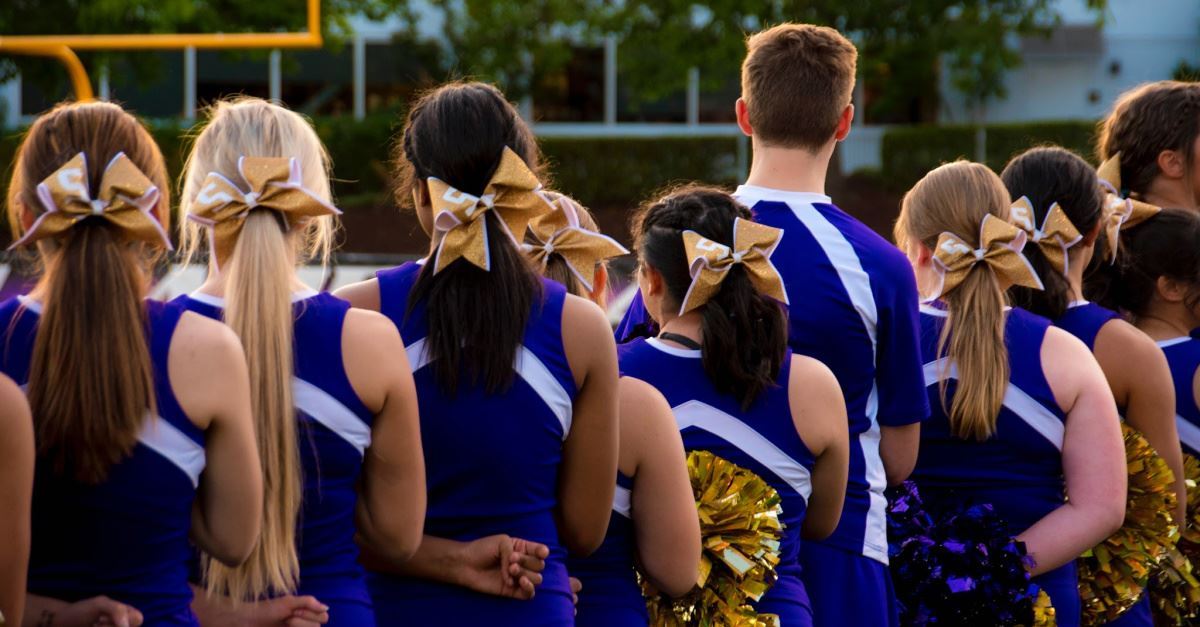 Tyra Winters is a cheerleader at Rockwall High School east of Dallas. She was riding on a homecoming parade float when she saw a desperate mother and a little boy in trouble.

She later told a reporter, “I see the kid. I see a little bright red face and his mom’s holding him up, begging for help, screaming, asking ‘someone help me someone help me.'” Tyra received CPR training in the eighth grade because her mother works in the medical field. So she jumped off the float, ran to the boy, and gave him three strong back thrusts that made him spit up the candy he was choking on.

The incident happened on September 18, but the mother, Nicole Hornback, brought her two-year-old son, Clarke, to Winter’s school last week to thank her. “I commend her for being a teenager and being trained,” Hornback said. “She saved my baby.”

The latest on Alex Trebek

It’s not hard to find challenges in the news today. For instance, a woman managed to board a Delta Airlines jet with no ID or boarding pass. An investigation into the security breach is ongoing and the FBI has been notified.

Jeopardy! host Alex Trebek says his ongoing battle with pancreatic cancer may lead to the end of his run as host of the game show. In other health news, a hospital in Pennsylvania has announced that it will transfer some babies to nearby medical facilities after three premature infants contracted a bacterial infection and died.

Isaiah 9:2 describes a day when “the people who walked in darkness have seen a great light.” In response, Frederick Buechner writes:

In one respect if in no other this metaphor of Isaiah’s is a very relevant one for us and our age because we are also, God knows, a people who walk in darkness. There seems little need to explain.

If darkness is meant to suggest a world where nobody can see very well—either themselves, or each other, or where they are heading, or even where they are standing at the moment; if darkness is meant to convey a sense of uncertainty, of being lost, of being afraid; if darkness suggests conflict, conflict between races, between nations, between individuals each pretty much out for himself when you come right down to it; then we live in a world that knows much about darkness.

Darkness is what our newspapers are about. Darkness is what most of our best contemporary literature is about. Darkness fills the skies over our own cities no less than over the cities of our enemies. And in our single lives, we know much about darkness too. If we are people who pray, darkness is apt to be a lot of what our prayers are about. If we are people who do not pray, it is apt to be darkness in one form or another that has stopped our mouths.

Why you have been “enriched”

In such a world, it can be tempting to stay on the sidelines, to focus on our own problems while leaving others to theirs. However, God’s call to take the good news of his love to our dark and broken world is clear (cf. Matthew 28:19; Acts 1:8; 1 Corinthians 9:22).

In this regard, I think we can learn a lesson from Nicole and Clarke Hornback. They didn’t have to come to Tyra Winters’ high school to express publicly their thanks, but gratitude motivates service.

What Paul said about financial stewardship applies to every dimension of life: “You will be enriched in every way to be generous in every way” (2 Corinthians 9:11). Every gift we have received is a gift someone else needs as well.

“By his wounds you have been healed”

As you remember what others have done for you, never forget what your Savior did for you. Paul described our debt succinctly: “For our sake he made him to be sin who knew no sin, so that in him we might become the righteousness of God” (2 Corinthians 5:21). Because “he himself bore our sins on the tree,” we can rejoice that “by his wounds you have been healed” (1 Peter 2:24).

In a Tibetan village I noticed a crowd of people standing under a burning tree and looking up into the branches. I came near and discovered in the branches a bird which was anxiously flying round a nest full of young ones. The mother bird wanted to save her little ones, but she could not. When the fire reached the nest the people waited breathlessly to see what she would do. No one could climb the tree, no one could help her.

Now she could easily have saved her own life by flight, but instead of fleeing she sat down on the nest, covering the little ones carefully with her wings. The fire seized her and burnt her to ashes. She showed her love to her little ones by giving her life for them. If then, this little insignificant creature had such love, how much more must our Heavenly Father love His children, the Creator love His creatures!